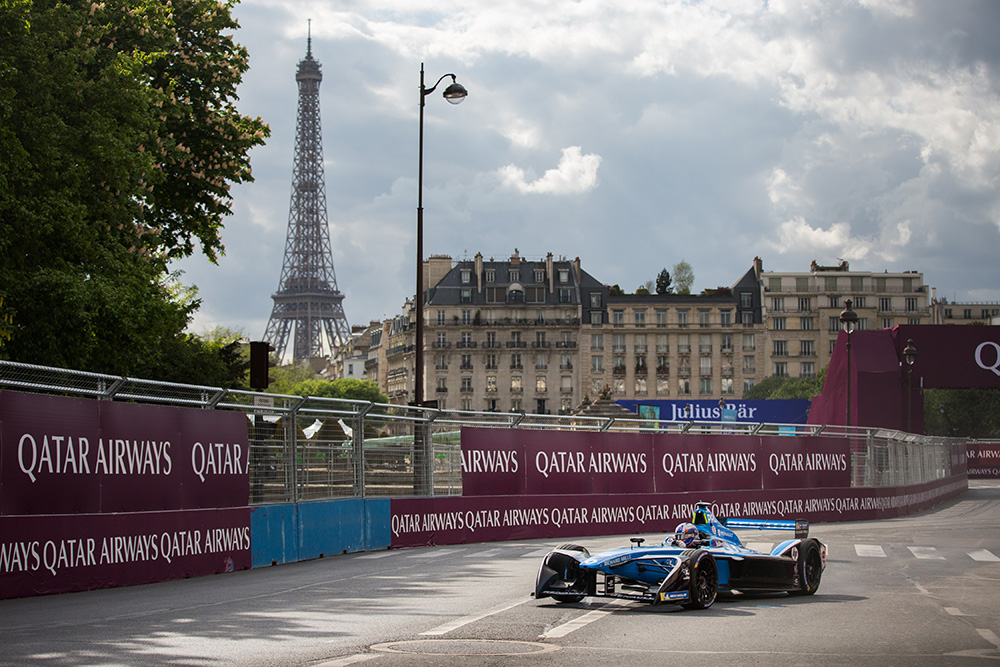 With Les Invalides and the Eifel Tower providing the backdrop, this year’s Paris ePrix was the theatre of yet another thrilling race in which Sébastien Buemi came home fifth. Nicolas Prost was tagged by another car on the first lap and finished outside the points.

The third Paris ePrix confirmed the popular success of Formula E with numerous well-known figures and supporters turning up to cheer on Renault e.dams and their drivers. The Renault Z.E. range was highlighted in the eVillage and on the track in the parade of electric vehicles in front of the Parisian public.

Buemi was in eighth place on the grid after failing to qualify for the SuperPole shootout by only 14/1000th of-a-second! Prost was in 13th place.

The race got off to a pretty chaotic start. Seb made a great getaway and gained two places while Nicolas was tagged by Tom Blomqvist first time round, who took off over the rear of the Frenchman’s car tearing off its rear wing in the process.

Despite this handicap he held on to 13th place which he was unable to defend because of the lack of downforce and he was overtaken by the drivers behind him. Even though no part of the car looked in danger of coming off, Race Control ordered Prost to pit and have a new rear wing fitted.

When the pit stop window opened the various strategies became clear. The two Renault e.dams drivers carried out late pit stops with a few seconds between each one.
Buemi held on to his sixth place behind Vergne, Bird, Lotterer, Di Grassi and Engel. Due to his extra pit stop, Prost rejoined a lap down in 18th place.

With around a dozen laps to go to the finish the tension moved up a few notches with Lotterer and Di Grassi both getting past Bird. Buemi was locked in a wheel-to-wheel battle with Engel and Abt for fifth place.

With five laps to go the Renault e.dams driver was unable to fend off Abt, but the outcome was decided last time round. Buemi managed to repass the German driver and then took advantage of the collision between Bird and Lotterer to see the chequered flag in fifth place. Prost finished 16th after his race had been ruined at the start.
The Renault e.dams came away from the eighth round of the season still in sixth spot in the teams’ championship with 77 points. In the drivers’ rating Buemi held on to his fourth place with 70 points.

The next round of the FIA Formula E Championship will take place in Berlin on 19th May.

Nicolas Prost no. 8
“I made a pretty good start and I was battling with Heidfeld and Abt in the first corners. It was all going well until Blomqvist hit me. It’s rather disappointing, but there was nothing I could do about it. Yet another difficult day to add to the previous ones! You just have to keep your chin up and hope for better results in the future.”

Sébastien Buemi no. 9
“The race got off to a great start as I gained two places on the first lap. After that my pace was good and our out-of-sync strategy – like Di Grassi’s who finished second – looked promising. On the other hand, the second stint was trickier as my setup wasn’t ideal. I couldn’t get the car to do what I wanted and I remained stuck behind Engel. Abt got past me with the help of his fan boost and then I repassed him on the last lap. We made light contact and I finished fifth. While it’s not really satisfactory I can take away some positives from today.”

Jean-Paul Driot, owner of the team
“The overall result is disappointing. Sebastien’s first car was very good, but the second one lacked efficiency. Our out-of-sync strategy was the right one although Engel managed to slip in between Di Grassi and us. As it’s very difficult to overtake on this circuit we were stuck behind while the gap opened up to the leaders. Even if Seb finally got past Abt and finished fifth it’s difficult to be satisfied with this result. We’re going to keep on working to get as high up the classification as possible. As for Nicolas, he was hit at the start and we thought he would be able to go to the end of his first stint. Race Control finally forced him to stop – rather a late call!”

Vincent Gaillardot, FE programme manager
“After our disappointing first outing in Rome where we obviously lacked performance, we did a lot of work analysing and understanding the situation to arrive in Paris with high hopes. Competition is incredibly tough and it’s getting closer and closer as Seb missed the SuperPole by less than 2/1000th of-a- second. From that moment on the rest of the day was compromised. We’re still trying to put together a perfect day without making mistakes and optimising every parameter. We know that the performance is there. We have to continue working so that our drivers are full of confidence to get back on the road to the podium.”

MEDIA RELEASE/Formula E Image: supplied - All you need to know as Season 7 of…