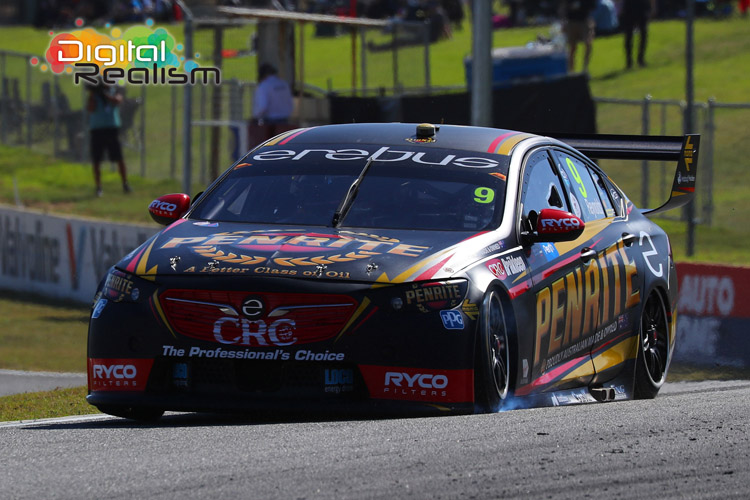 A brilliant strategy and stunning drive has handed Erebus Motorsport’s David Reynolds a second-placed finish at Barbagallo Raceway, while Anton De Pasquale showed impressive pace but failed to convert it to a result.

Both drivers made a superb start to the race, Reynolds getting past Rick Kelly and Andre Heimgartner to climb into fourth. De Pasquale, meanwhile, dodged opening lap chaos to come out unscathed and jump four spots to P16.

The first and only Safety Car was called as early as lap four, with James Golding beached as the remainder of the field dived for pit lane. With still 79 laps on the board, a steady second stint saw the drivers consolidate their positions. Reynolds passed Will Davison for second and was hanging right onto the back of Chaz Mostert for the lead. Behind them, De Pasquale defended 16th before he ran wide into the sand trap at Turn 6, ultimately falling down the ladder.

With Reynolds running a different strategy to those he was racing against, the #9 driver was the last of the leaders to pit again at the end of lap 31, looking for a fresh tyre advantage later in the race. De Pasquale got the call and arrowed toward pit lane just two laps later, returning in the same spot he left, P23.

The Penrite Holden re-joined in front of Mostert this time and used his five-lap fresher tyres to move away from the Tickford driver and move into sixth before executing a brilliant move on Kelly and Jamie Whincup. The #9 swung around the outside down the front straight, stealing third place.

Sporting fresher tyres than those in front, Reynolds continued to make ground on the leaders, Scott McLaughlin and Heimgartner, who were 7.8-seconds away. With another stop still on the cards, Reynolds closed the gap to 5-seconds before making his third and final stop on lap 60. Teammate De Pasquale followed five laps later to run 18 laps to the end.

The gap between Reynolds and McLaughlin closed to two seconds and with the #9 looming over the DJR Team Penske falcon right until the finish line, Reynolds came home in second. His teammate De Pasquale shone in the late stages of the 83-lapper, but unfortunately one lap down, was unable to make up the distance and would ultimately cross the finish line in P23.

DAVID REYNOLDS: Started 6th, Finished 2nd
“I thought we were going to have the perfect day today, but we just missed out. I had a brilliant start, first stint, lead the race for a while, had good tyre degradation and it was all coming together but we were a little slower than the others in pit lane and every time I re-joined I had to pass too many people and that gave McLaughlin too big a gap. Other then that, it was a perfect day.

“We still need to work on a few things to beat the very top teams, but our car performance was better today than yesterday, so it proves we are constantly getting better.”

ANTON DE PASQUALE: Started 20th, Finished 23rd
“Qualifying didn’t go our way today; we just didn’t have the pace we had yesterday. Our pace on the used tyre was good, but we couldn’t transfer that into qualifying speed.

“The first few laps were good in the race before the Safety Car, I had a really good launch and was able to make a couple passes. In that second stint though, on the same tyres we qualified on, the car was slower and I made a few mistakes, came off the road, and unfortunately went a lap down. We had the speed back in the last stint but were too far down and couldn’t make up any spots from there.”