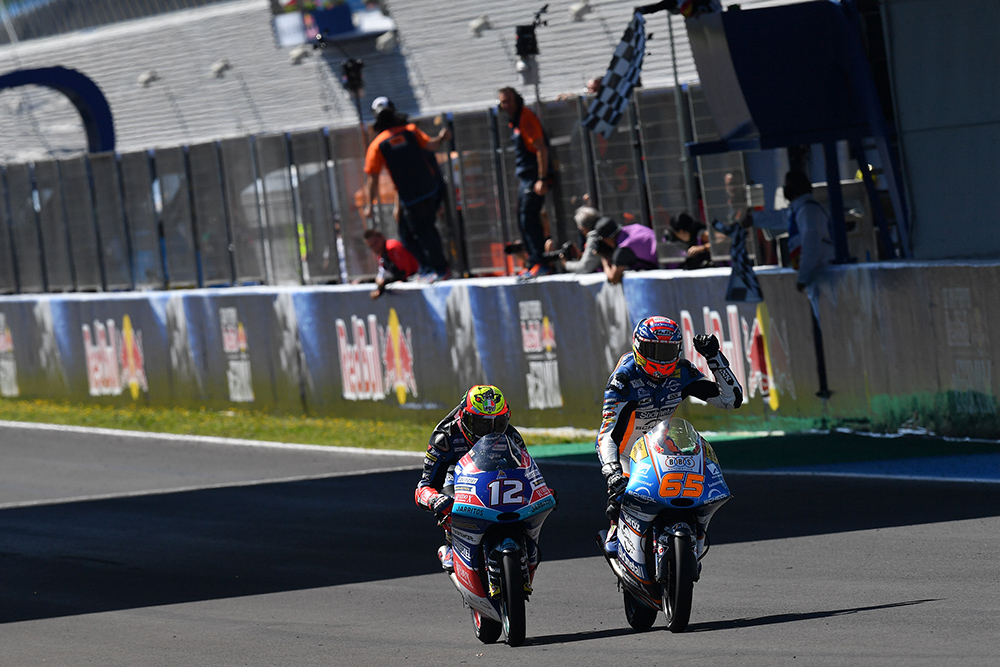 German rider resists Bezzecchi on the final lap as Canet takes out Martin, Bastianini and Arbolino

Philipp Oettl (Südmetall Schedl GP Racing) has taken his first ever Grand Prix win on his 91st start, emerging from a dramatic latter part of the race to face Marco Bezzecchi (Redox PruestelGP) in a last lap duel and drag to the line, coming out on top by just half a tenth. Completing the podium was Marcos Ramirez (Bester Capital Dubai), back on the rostrum at his home race after some late drama saw rookie Alonso Lopez (Estrella Galicia 0,0) lose one position from where he’d crossed the line – third. Lopez took P4 after an early run off and stunning ride through the pack.

That wasn’t the biggest drama late in the race, however – with a multi-rider collision with four laps to go giving the standings a serious shake up. Aron Canet (Estrella Galicia 0,0) overcooked Turn 6 and made contact with Championship rival Jorge Martin (Del Conca Gresini Moto3), with Enea Bastianini (Leopard Racing) and Tony Arbolino (Marinelli Snipers Team) also caught in the domino effect and all four out the race. Canet received a penalty and will be starting from the back in the next race.

In the standings, however, that leaves Bezzecchi at the top of the pile – with the KTM rider now eight clear of previous points leader Martin.

It was Martin who took the holeshot off the line before the tale took a turn, with teammate Fabio Di Giannantonio slotting into second as a crash at Turn 2 saw John McPhee (CIP – Green Power) collide with Dennis Foggia (Sky Racing Team VR46) and Lorenzo Dalla Porta (Leopard Racing). But 18 riders managed to remain in a huge front freight train – with the classic Moto3™ chopping and changing then soon lighting it up.

That was when Lopez made a big error when fighting for second, the rookie having already impressed in the initial laps but then running off track briefly as he attempted to attack eventual winner Oettl. The EG 0,0 rider was then dropped back out the points and faced a battle back through – pulling that off in style to cross the line third and then lose one position to be classified fourth.

That was behind the battle at the front as Oettl arrived on the final lap ahead of Bezzecchi. The two were in clear air after the Canet-Martin-Bastianini-Arbolino incident behind them, and the German held firm with a perfect defensive ride to emerge out the final corner ahead and keep it on the slipstream.

Second rookie home Jaume Masia was another who, like teammate Ramirez ahead of him, put in an impressive ride through the pack as the Bester Capital Dubai rider made it a double top five for the team, ahead of Tatsuki Suzuki (SIC58 Sqaudra Corse) in sixth. Di Giannantonio, after dropping a little off the leaders following an earlier mistake, crossed the line in P7 ahead of Jakub Kornfeil (Redox PruestelGP).

2014 Asia Talent Cup Champion Kaito Toba (Honda Team Asia) had a stunning race to lead much of the fight to complete the podium, ending up P9 over the line after drama at the final corner. Gabriel Rodrigo (RBA BOE Skull Rider), despite a big crash on Saturday, completed the top ten for more solid points.