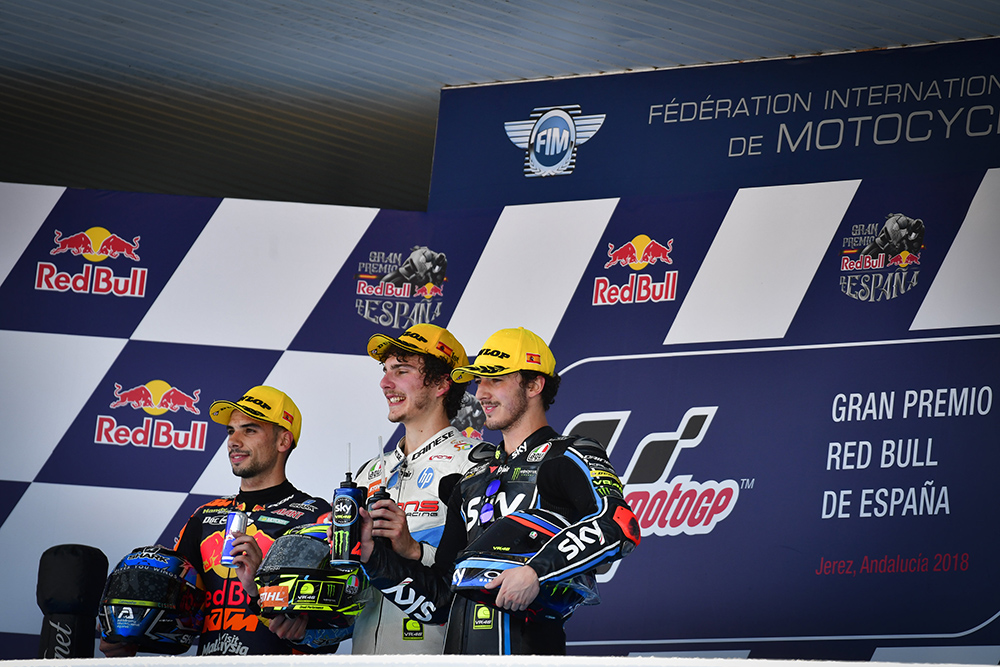 Lorenzo Baldassarri (Pons HP40) rode imperiously to take only his second ever Moto2™ victory at the Gran Premio Red Bull de España, lifting him up to second in the World Championship. Miguel Oliveira (Red Bull KTM Ajo) came from P14 on the grid to take a superb second, as Francesco Bagnaia (SKY Racing Team VR46) took the checkered flag in third, keeping him top of the Championship standings – as last year’s race winner Alex Marquez (EG 0,0 Marc VDS) crashed out at Turn 2.

Launching from pole, Baldassarri didn’t get the start he wanted, losing out to Marquez, Brad Binder (Red Bull KTM Ajo) and Bagnaia as the pack headed into Turn 2. There was drama down at Turn 6 on the opening lap, as Luca Marini (SKY Racing Team VR46) broke too late into the hairpin, collecting Jorge Navarro’s (Federal Oil Gresini Moto2) rear tyre, taking them both down in the process – riders ok. Meanwhile, Oliveira was making up the places after a cracking start, the Portuguese rider up to eighth on the opening lap.

Baldassarri hit the front for the first time on lap three, with Binder, Bagnaia, Marquez and Oliveira in close pursuit. The number 7 then pushed on, creating a small gap between him and second place Binder after setting a new race lap record, with the former Moto3™ World Champion starting to struggle on his KTM.

By lap seven, Oliveira and Marquez were the two keeping the Pons HP40 rider in check, with the three of them slightly gapping Bagnaia, Xavi Vierge (Dynavolt Intact GP), Binder, Mattia Pasini (Italtrans Racing Team) and Romano Fenati (Marinelli Snipers Team) behind. The Italian rookie then crashed at Turn 10 while battling with Pasini, but walked away unhurt.

11 laps in and the front three were still ahead, however disaster then struck for Marquez. Pushing to stay in touch, the Spaniard lost the front at Turn 2, a carbon copy of Marc Marquez’s crash at the same corner.

It was all about Baldassarri at the front though, gradually edging clear of Oliveira to create a two second gap. The battle for the final podium looked to be hotting up as Vierge and Pasini closed the gap to Bagnaia. The Argentina GP race winner then dropped off the pace, leaving Vierge to challenge the Championship leader.

The brilliant Baldassarri wheelied across the line, with Oliveira and Bagnaia – who held off Vierge – rounding off the podium. Pasini came home in a solid fifth, as Binder had to settle for sixth. Marcel Schrӧtter (Dynavolt Intact GP), with shoulder ligament damage, was a phenomenal seventh, with Sam Lowes (Swiss Innovative Investors), his teammate Iker Lecuona, Fabio Quartararo (Beta Tools – Speed Up Racing), reigning Moto3™ World Champion Joan Mir (EG 0,0 Marc VDS) – who has been suffering from a stomach bug all weekend –  and Simone Corsi (Tasca Racing Scuderia Moto2) rounding out the top 12.

The overall standings close right up as we head to Le Mans, as the Moto2™ World Championship shapes up to be a thriller in 2018.