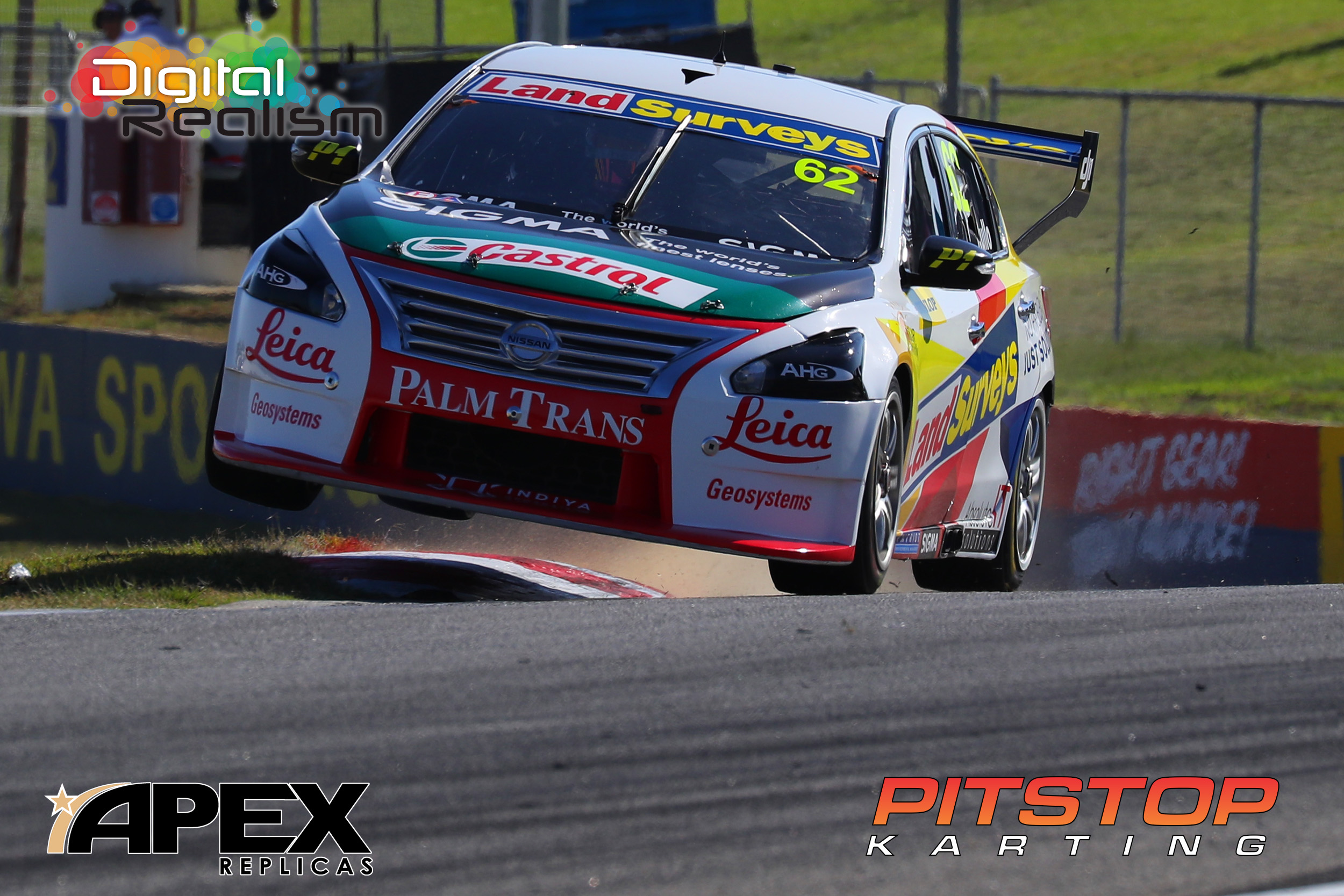 Alex Rullo made the most of his local track knowledge to claim pole position for race 1 of the Dunlop Super2 category at the Barbagallo circuit. Fellow W.A drivers Brodie Kostecki and Dean Fiore claimed the next two places, with reigning champion Paul Dumbrell in 4th. The short track led to close times during the qualifying session with the top 16 cars separated by less than 1 second.

Rullo led the field away from the start of the 22 lap race, while Paul Dumbrell made a fast start to jump Dean Fiore and take the inside line for turn 1. Dumbrell stuck to the tail of Rullo’s Nissan and moved past Kostecki at the exit of the first turn. The rest of the field jostled for position throughout the first series of corners without incident. Matt Chahda and Nathan Morcom appeared to continue their dispute from Symmons Plains as the pair made contact at the exit of turn two, when Morcom looked for an inside pass on the Auto One car. The pair made contact on the run to the esses, with Morcom riding the rear wheel of Chahda which lifted the left rear momentarily. Chahda was forced onto the grass near the spectator wall while Morcom continued. The DPO driver was issued with a 5 second time penalty for the contact.

The Kostecki team followed the move of Triple 8 racing at Phillip Island and allowed Kurt Kostecki to pass cousin Brodie when the former showed better race pace. The positions were later reversed when Kurt was unable to make an impression on the Nissan of Dean Fiore.

Paul Dumbrell followed Rullo throughout the early part of the race as he looked for an opportunity to pass. Dumbrell also came under pressure from Fiore when the Eggleston Motorsport driver dropped a wheel at the exit of Kon’s corner. Fiore was then fortunate no to hit Dumbrell when the former appeared to brake early for the final corner. The Sitech Nissan locked front wheels and veered towards the left to avoid contact with the Commodore. Dumbrell had another moment at the same corner a few laps later and ran the Burson entry deep into the sand. Dumbrell maintained momentum but dropped to 14th as a result.

Macauley Jones also came to blows with Garry Jacobson at the apex of turn 7 as Jones looked to push forward in the race.  Neither car was compromised to any great extent and no advantage was gained by Jones. Stewards later deemed that no further action was required. Jones eventually finished 9th after a late race pass on Jake Kostecki in the braking zone for turn 1.

Seventeen year old Rullo held on to take his first Dunlop Super 2 race win from Dean Fiore and Brodie Kostecki, in what was a trifecta for Western Australian drivers. Kurt Kostecki, Mason Barbera, Thomas Randle, Chris Pither, Shae Davies, Macauley Jones and Jake Kostecki rounded out the top 10. Paul Dumbrell remained in 14th for remainder of the race, while Nathan Morcom retained his 19th place despite the 5 second penalty.