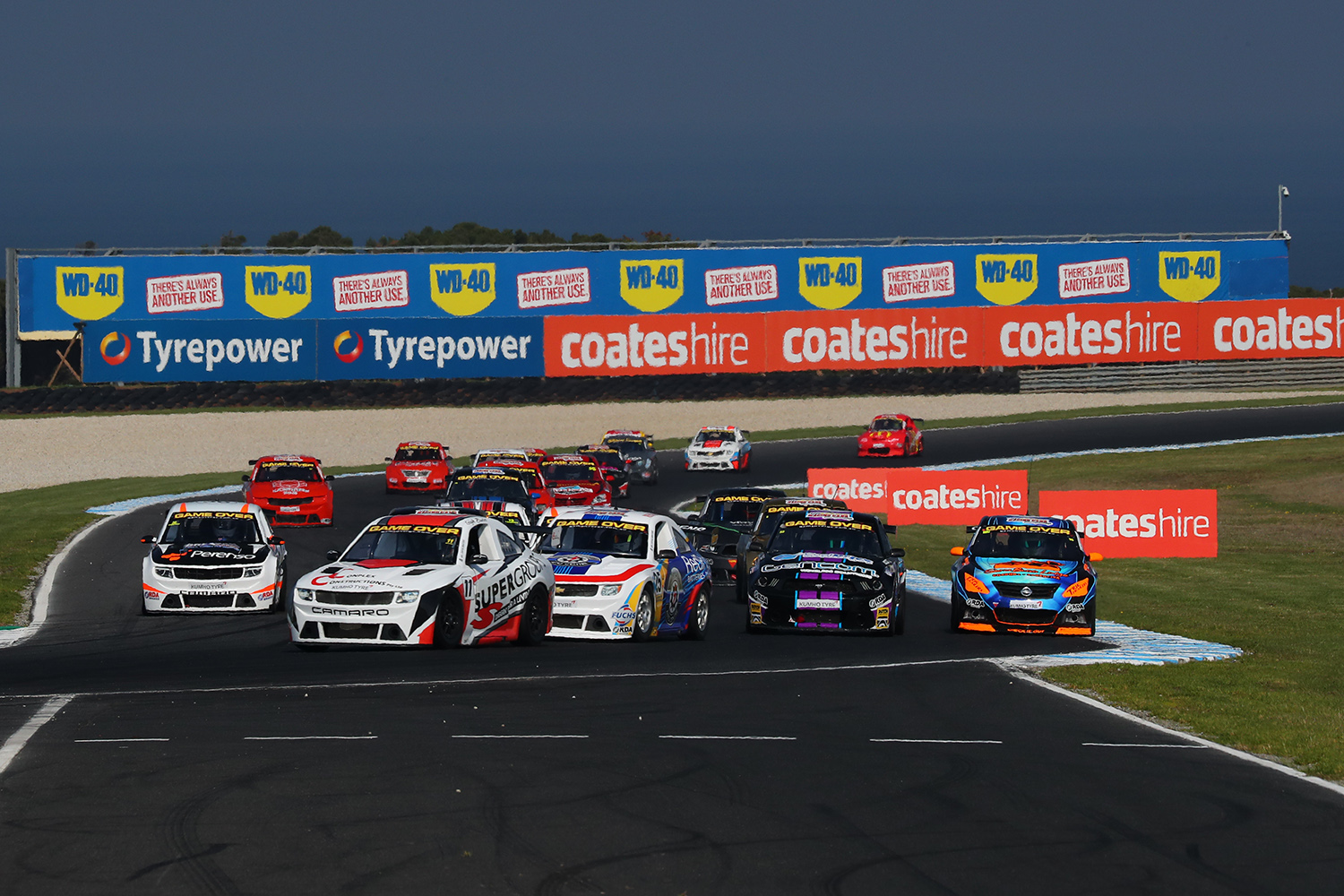 The Aussie Racing Cars known as the little pocket rockets put on a fantastic show of racing on the weekend at the Phillip Island WD-40 500 Supercars event.

“They maybe small but the power to weight ratio is off the scale” and “thats what I want to be racing” were comments we heard whilst in the Aussie Pits.  The class lost a race due to the late start on Friday after thic fog cancelled both the Aussie Cars and Kumho V8 Touring Cars qualifying sessions.  Below is a blow by blow report(s) of their racing during the three day event.

If you’d like to see all the exciting action you can review the photographs here from our Facebook Gallery.

IT WAS a thrilling qualifying session for the pocket rockets at Phillip Island today with Kel Treseder in his KKP Motorsport Camaro and a time of 1 minute 45.7591, earning pole position for tomorrow’s first race.

Heavy fog caused the three sessions (practice, qualifying and race one) set down for the opening day of round two of the Aussie Racing Cars Championship Series to be rescheduled as two sessions (practice and qualifying) ahead of a three-race format over the next two days, rather than the usual four races.

Treseder had to be mindful of nearest rival, Justin Ruggier (Hertz Mustang) who was the continually fastest in the first sector but couldn’t match his rival in the next two segments – the gap was three tenths of a second in the end.

Ninth fastest was Blake Sciberras (Hertz Mustang) who had to have the engine changed in his mount after the early practice session. Former series title holder Darren Chamberlin (RDA Brakes Camaro) finished the session 13th after having a damaged front splitter removed.

Earlier in the day, after the fog had lifted, practice had been a strong indicator of what was to come. Treseder led the way ahead of Ruggier, Ensbey, Tucker, Chapman, Heinrich and Sciberras.

TWO RACES for the second round of the Aussie Racing Cars Championship Series were held today at the WD-40 SuperSprint with Kel Treseder winning them both on the Phillip Island circuit.

In the first, the KKP Motorsport Camaro driver battled throughout with Justin Ruggier (Hertz Mustang), swapping positions a couple of times before Treseder withstood a final challenge on the last lap and won by 0.45 seconds.

Mixing it with them was Joel Heinrich (Osborns Transport Altima), getting in between them on occasion before ultimately following the winning pair home.

As with the leading three, there was a similar three-way battle for fourth between Brendon Tucker (Variety Group Camaro), Josh Anderson (RDA Brakes Camaro) and Ruggier’s team mate Blake Sciberras (Hertz Mustang) which, after several passes, finished in that order.

In the second outing Poynting and Bowler were off the front row as the top ten finishers from race one were reversed. The latter went to an immediate lead. But on the second lap, Treseder, who had blitzed his way through from tenth, grabbed the lead and ran away to a comfortable win.

Kyle Ensbey (Mustang) finished race one in twelfth after an off at turn two on the opening lap. He quickly came into contention in race two, getting to second with a lap to go. But Heinrich came back on the last lap to get past him out of turn eleven and into the run to turn twelve.

Ruggier went out before half distance with a blown engine and Tucker was bumped off early at turn two. That left Anderson in fourth ahead of Sciberras, Chapman and Bowler.

RACE THREE made for the perfect weekend for Kel Treseder and his KKP Camaro. Leading all the way, Treseder won the second round of the Aussie Racing Cars Championship Series at Phillip Island, backing up his round one victory at Baskerville.

Treseder grabbed the lead from the outset and was never really threatened for the win, although he was chased closely by Joel Heinrich(Osborn Transport Altima) and Kyle Ensbey (Your Print Group Mustang) in the early stages.

The leader’s position was made somewhat easier as Heinrich and Ensbey fought it out for second, which ultimately went the way of the latter. They finished line astern, but Heinrich was slapped with a 5.0-penalty for a starting infringement. Despite that he was still classified third.

Fourth went to Justin Ruggier (Hertz Mustang) who started twelfth and systematically worked his way past the fast competition. Next were the Camaros piloted by Josh Anderson (RDA Brakes) passed Reece Chapman (Motorsport 25), their dice for fifth only resolved with two laps to go in Anderson’s favour.

Adam Clarke (Lustre Bar Altima) was next, clear of the best of the femmes in Charlotte Poynting (Mustang). She was shadowed across the line by Maddy Dunston (Camaro).

If you’d like to see all the exciting action you can review the photographs here from our Facebook Gallery.