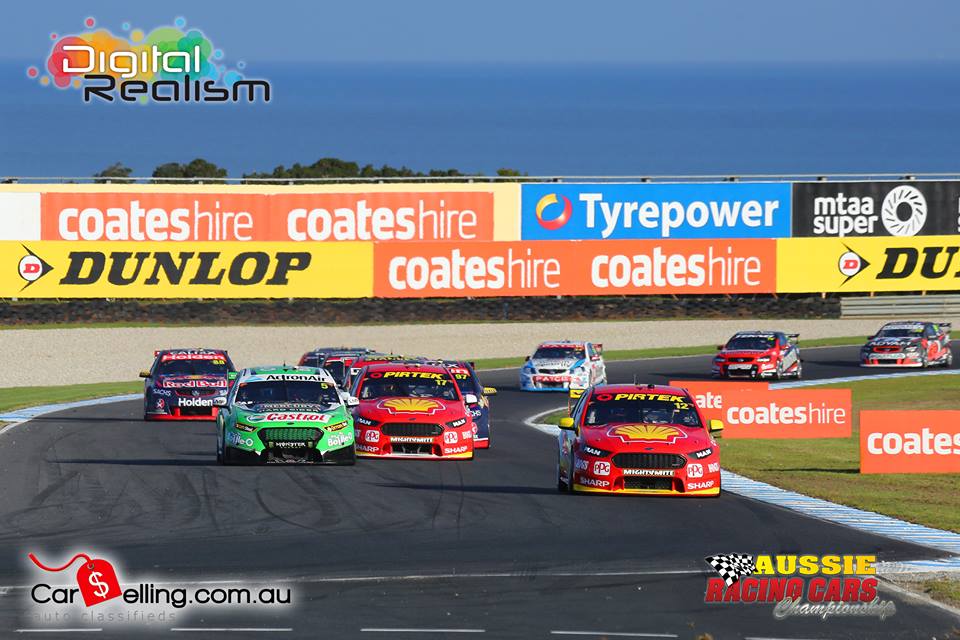 We arrived on the island late yesterday afternoon and made a quick trip to the track to drop off some of our gear needed for a big weekend here at Phillip Island, most of the Supercar trucks and some of the supports were lined up over the back of the track.

Phillip Island has a very tough Work Safe program, thats a good thing – but for all of the B-Doubles in fact most trucks over 3 ton and 4mtr high (the max height of the tunnel under the track) they can only enter the circuit over by “hayshed” where the track is strengthened to take the weight.  There is a strict policy NO Trucks on the track, we know all of this as for us to drop our gear in we were required to undergo a 20 minute orientation and multi guess test at the end LOL 🙂

In contrast when we roll into Barbegello all of the transporters are parked on the downhill back straight, quite a spectacle.

This weekend is round 4 which sees the Supercars race in races 9 & 10 of the season, both races are 57 laps or 250km in duration.  Jamie Whincup currently leads the championship on 658 points from Scott McLaughlin and David Reynolds both with 647 points.  Whincup and Shane van Gisbergen have had two race wins a piece, with the later taking 3 pole positions, without a doubt Red Bull Holden Racing Team will be the ones to beat, although with the changes Shell V-Power have made to the car with composite parts they too will be pushing hard.

The last round at Symmons Plains had the whole 26 car field covered by under 1 second in qualifying, it will be interesting to see if this is the case here this weekend.

Mark Winterbottom’s 200th Virgin Australia Supercars Championship event appearance at Phillip Island this weekend will be marked by a change in car number.  Winterbottom’s #5 The Bottle-O Racing Falcon has been re-numbered to #200 to mark the milestone.

The 36-year-old, whose career has included a Bathurst win in 2013 and the championship two years later, is the 15th driver to achieve the 200 event marker.

There is a good supporting line-up for the weekend (it was somewhat lacking in Tassie) the Aussie Racing Cars or Pocket Rockets are back for their second round for 2018, its been two months since their first round at Baskerville, they join the Supercars for the first time of 5 rounds for the year.  They have 7 rounds in total, one round is with the Shannons Series at Sydney Motorsport Park.  Kel Treseder is currently leading by a single point from Adam Gowans who won’t be at this round and Kyle Ensby in third.

More V8 action for the fans sees the Kumho Tyres V8 Touring Cars running, an eclectic collection of now past Supercars with some quite modern running against the older models such as Falcon AU’s and Holden VY’s and older.  They have a 24 car grid and will undoubtedly provide some great racing.

In their first round for the year the Toyota 86 series will have a packed grid, in a bumper year last year the series again boast one of the biggest fields currently racing in Australia, let alone being a one make series.  Its fast become a class of stepping stones to Supercars or Super2 and even AGT and Porsche.

The final support class is another one make and super exciting the Wilson Security Porsche Carrera Cup Series.  This is their third round for 2018.  Jaxon Evans is aiming for his fourth straight Carrera Cup round victory having won the last round in 2017 on the Gold Coast and first two rounds of 2018 at Adelaide and Albert Park.  This weekend are their endurance events with two 100km races.  Each race is scheduled to be held over 25 laps (111.125-kilometres), making them the longest single driver races ever seen in Carrera Cup history.

And in summing up this weekend for the first time in a long time the long range weather forecast is actually for fine weather with even good temperatures, mind you this is Phillip Island and that can change in the next five minutes!