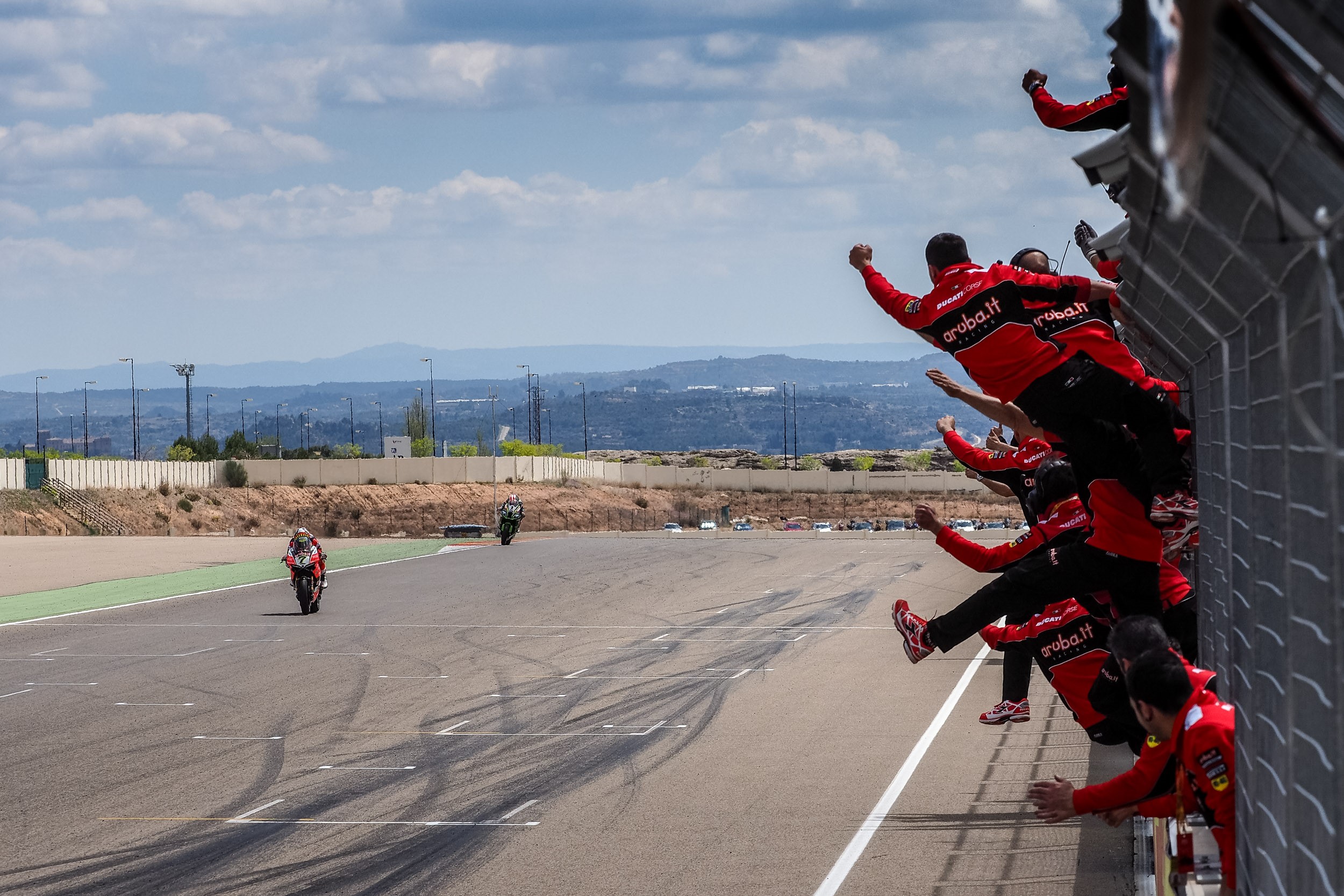 There are very few certainties in the WorldSBK calendar – but a Chaz Davies (Aruba.itRacing – Ducati) and Jonathan Rea (Kawasaki Racing Team WorldSBK) battle at MotorLand Aragon seems as close as you can get. In a repeat of last year’s Aragon Round, the two leading riders of the championship clashed sensationally in the final laps, with the Welshman avoiding a first Rea double of the season and taking his second win of the MOTUL FIM Superbike World Championship, and a record seventh around the Aragon bends.

The race start was similar to yesterday’s affair. Again, it was Rea sticking amongst the Ducatis at the front, with the Panigale R showing incredible pace at the Alcañiz circuit. This time it was Xavi Fores (Aruba.it Racing – Junior Team) and Melandri heading the early laps, with a calculating Rea waiting behind.

Just one mistake is enough for the reigning champion to pounce, and as it happened there were two. First a wobble from Melandri (who has had some worrying difficulties controlling the bike throughout the weekend, despite showing very good rhythm) allowed Rea to move up to second. Fores, looking for his first win in front of his passionate local fans, held his provisional lead well under Rea’s pressure – until Lap 9, when his front-end gave in and left the Spaniard on the floor, leaving way for what seemed to be becoming a trademark Rea double.

But, with one Ducati rider leaving the leading group, in came another. Chaz Davies didn’t have the amazing start he did in Race 1, but quietly he benefitted from the action at the front to creep up to Rea and Melandri, picking off the Yamahas along the way. He was too far back to greatly trouble Rea in yesterday’s Race 1, his Superpole 2 slip a disadvantage too large to overcome. But on Sunday, with five laps to go and having already overcome his teammate, he got past the Northern Irishman. With the pair coming in close into the final lap and ready for a photo finish, Rea went wide in the middle sector, handing Davies a phenomenal win.

Tom Sykes (Kawasaki Racing Team WorldSBK) suffered a nightmare race off the grid, falling from third to eighth at the first turn, with Davies in ninth passing him shortly after. The Brit fought back to sixth at the checkered flag, but will be disappointed at his results throughout the weekend after two front-row starts.

P1 – Chaz Davies (Aruba.it Racing – Ducati)
“Lucky no.7! It was a good fight for it as well, really I dug in, I didn’t feel great in the early laps, I was trying to learn the bike. There was a lot going through my mind, I wanted to stake my time and stay patient. I had to force a lot of the passes, I am so glad to pull it off, lucky no.7 and roll on Assen.”

P2 – Jonathan Rea (Kawasaki Racing Team WorldSBK)
“It was a really fun race, Chaz was really strong and it was all I could to today. They were making a lot of mistakes but if they were making the mistakes they were fine, but if I was making a mistake I couldn’t make the time back up. I was sing the first to sectors as my strongest pints, I’m really happy with this weekend and to come out of here extending the lead is nice so thanks to my KRT team.”

P3 – Marco Melandri (Aruba.it Racing – Ducati)
“It was very difficult, the speed is there but every time I tried to pass someone the bike is shaking so bad. On the last lap I tried to pass but the rear brake went down so I settled for third. Its a shame because I know I have the speed to fight for the win.”