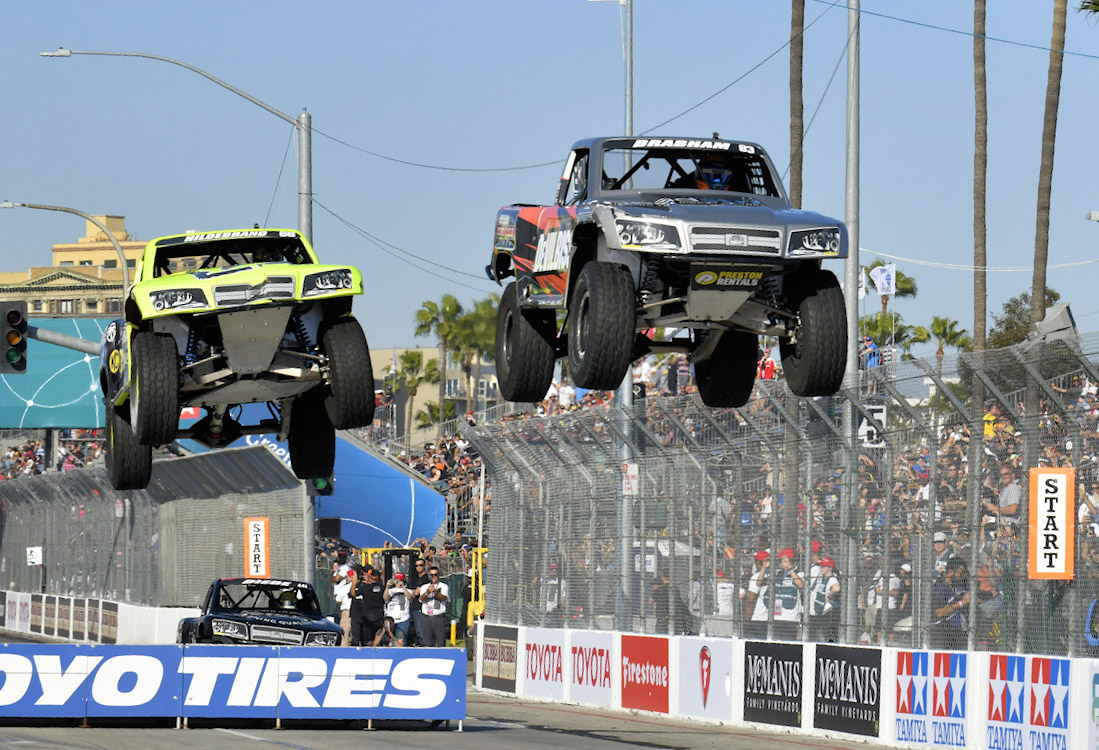 For Brabham it was his second consecutive round victory in his Preston Rentals backed DeVilbiss Racing entry after a win in front of a home crowd in Adelaide last month.

Yesterday’s first of two races finished under a red flag after Apdaly Lopez rolled coming off a jump and ended up on his side against the fence. Lopez was able to get out of his car without injury.

However, with 17 minutes to go the race wasn’t restarted. Brabham had made up nine positions, having started 13th with the inverted grid and was in position to fight for the lead of the race when the red flag came out.

Under clear conditions, Brabham started race two today from 12th position, picking up where he left off in the first race by moving up eight positions before the first competition caution came out.

With the field bunched up, Brabham pounced on fellow Australian, Paul Morris for third and then began chasing down the leaders – Jeff Hoffman and Blade Hildebrand.

Brabham moved to the lead just before the second competition caution came out with eight minutes remaining in the race. Hoffman and Hildebrand fell over themselves as the field was released under green again and Cole Potts was left to chase down Brabham.

Brabham charged forward, extending his race lead over the field and comfortably came home with the win followed by Potts and Gavin Harlien.
Brabham celebrated with a couple of massive burnouts and a two wheel victory lap in front of the packed Long Beach grandstands.

Series-creator Robby Gordon and Brabham both finished the round with 29 points, but Brabham’s race victory means that the 24-year-old has the overall round win. Race one winner, Harlien finished third with 28 points.

Stadium SUPER Trucks return to Australia for their next round, set to take place at Perth’s Barbagallo Raceway, May 4-6.

WHAT MATT BRABHAM HAD TO SAY…

“We just had a great weekend,” said Brabham.

“It was disappointing to have the race red flagged early yesterday because we had a fast truck and I think we could have had a go at the win.

“Today everything went to plan.

“I got through traffic and it was was good to get to the front with a few laps to go.”

“We had guests from DeVilibiss and Preston Rentals here this weekend and it was great to share some champagne with them today.”
“I have been watching Robby (Gordon) get up on two wheels and I knew that I could do it.

“I have had a couple of failed attempts, but today I nailed it with almost a full lap on two wheels and I could hear the fans screaming as I continued around. It was pretty cool.”

“It is frustrating to be at an Indycar event and not be out there, but I am loving the Stadium Super Trucks and the series is getting better and better.

“It would be a lot worse if I wasn’t out there at all.
“Robby (Gordon) has thrown me a lifeline with this drive and I am grateful to him and all our sponsors for giving me an opportunity to make a living out of motorsport.

“In an ideal world I would be racing everything.
“It is great to come here and leave here with with the championship lead.
“I am looking forward to the next round in Perth next month.”