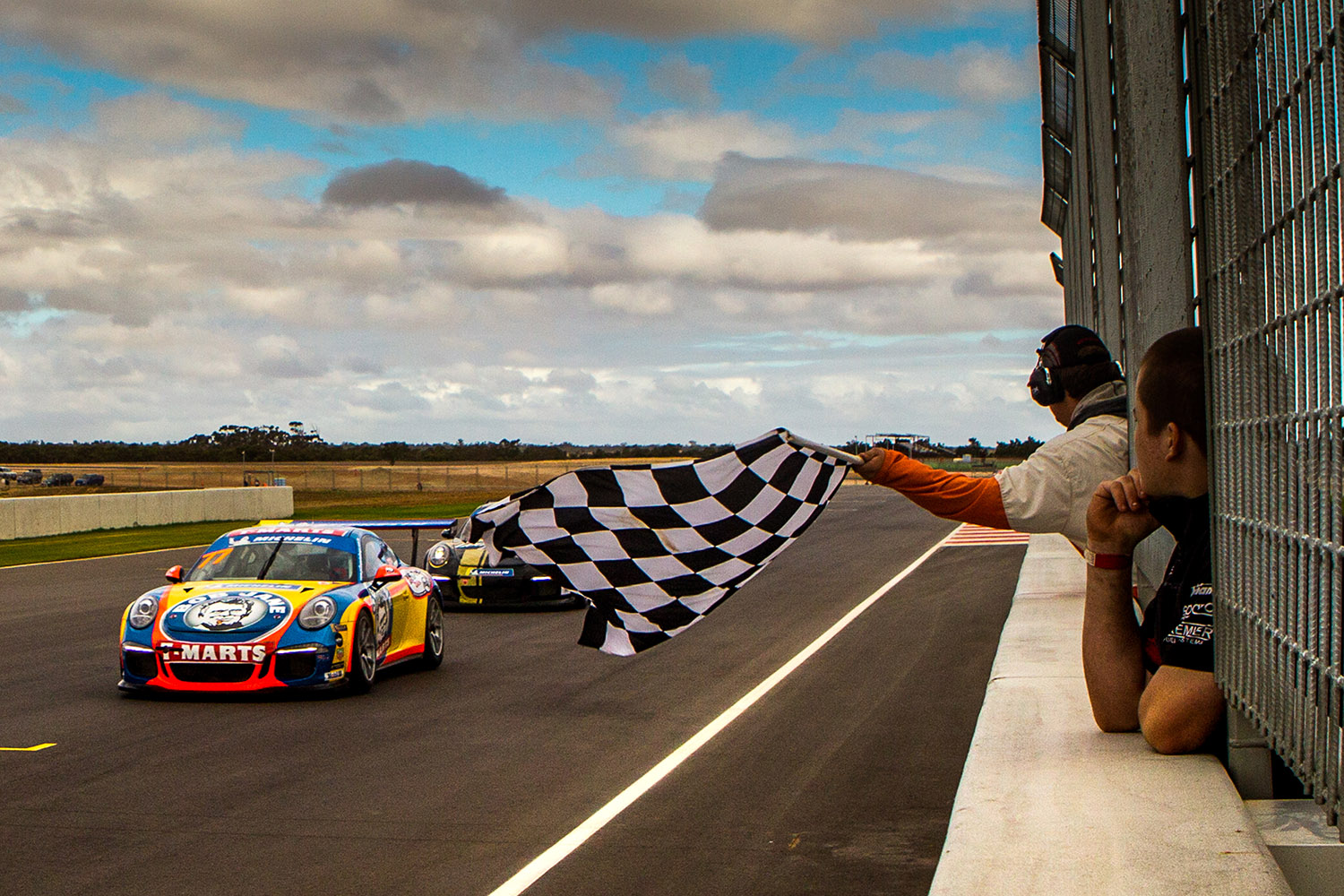 South Australian teenage motor racing sensation Max Vidau has won the season opening round of the 2018 Porsche Michelin GT3 Cup Challenge at the inaugural racing event to be held at South Australia’s The Bend Motorsport Park.

The 16-year-old Adelaide based racing driver showed maturity beyond his years to recover from ninth place in an interrupted qualifying session to win two of the three races along with the outright round victory after an incredible final race battle. The Bob Jane T-Marts sponsored driver greeted the chequered flag just 2/10ths of a second ahead of hard charging rival Cooper Murray after having traded the lead of the race several times with him during the exciting ten lap contest.

“It’s a new track and I’m a South Australian with a few people here supporting me, so it’s nice to give them the race win,” said Vidau.

“I messed up the start a little bit there but I managed to get the spot back,” said Vidau. “It was an awesome battle with Cooper. I felt like I could have broken away from him there a couple of times, but he reeled me back in and we battled it out. It’s my first round and now my first win, which is great.”

Vidau was forced to start the opening race of the weekend from ninth on the grid when a rain shower and two red flags left him unable to get a clear lap in qualifying. He made up seven positions in the early stages of the first race before running off the road and damaging his front splitter. He recovered to regain second place, earning the young racer a front row start for the second race.

Vidau took the lead from the start of that race and pulled an eight-tenths of a second gap on the field after the first lap, before an accident in the mid-pack forced the rest of the race to be run behind the Safety Car.

“We refocussed after a few mistakes in the first race in terms of my concentration and it was good to come out and take the win,” said Vidau.

These outstanding performances at the first-ever motorsport event at The Bend Motorsport Park and Vidau’s first race in a Porsche GT3 Cup Car after his stellar karting and open wheeler career have clearly showcased this young driver’s potential. Vidau’s opening round victory has also vindicated the decision made earlier this week to make the Adelaide racer one of three Porsche GT3 Cup Challenge Michelin Junior Team scholarship members taking part in this year’s championship.

“Porsche has many exciting motorsport involvements worldwide and I hope that I can continue with Porsche to ultimately replicate the path of talented drivers like Matt Campbell. I’m looking forward to learning as much as possible by being a Michelin Junior Team member this season and really appreciate being selected, ” Vidau said.

The next event on the 2018 Porsche Michelin GT3 Cup Challenge Australia calendar takes place at Melbourne’s Sandown Raceway in Victoria from May 11 to 13.