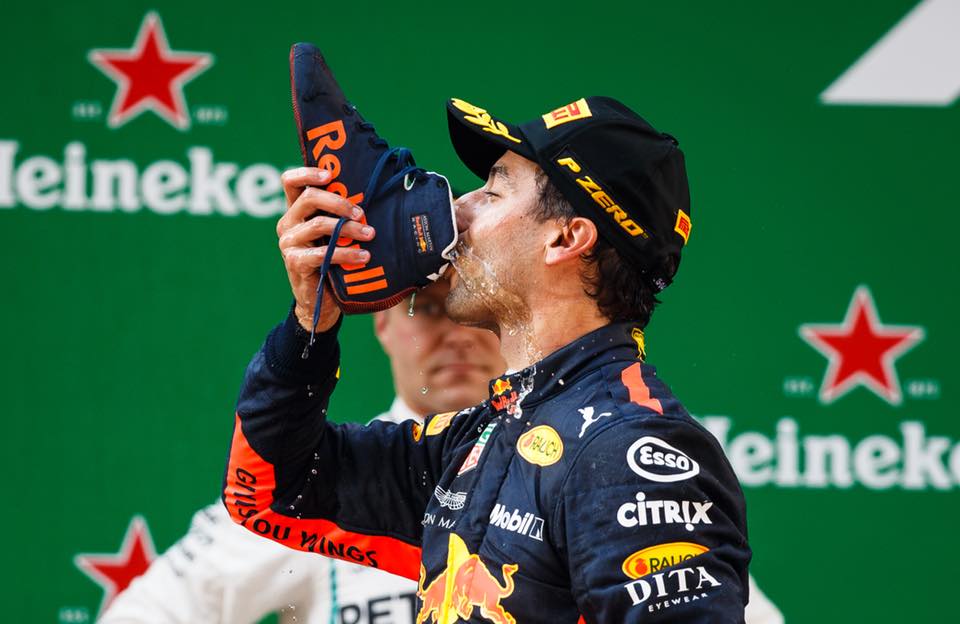 F1 – Daniel Ricciardo somehow managed to put aside the mechanical issues which plagued him last week at the Bahrain GP and those which surfaced during P3 this weekend. Whilst the championship front-runners had confrontations with Max Verstpappen, Ricciardo took advantage to claim the first win for a car other than a Ferrari and a driver other than Sebastian Vettel.

The opening stint of the Chinese Grand Prix was largely free of drama, with Vettel on course for his third win in as many races this season. But it exploded into life when Toro Rosso’s Pierre Gasly went from hero to zero.

He committed F1’s cardinal sin by crashing into team mate Brendon Hartley at the hairpin on Lap 30 of the 56, scattering debris across the track.

The safety car was called into action and Red Bull responded, pulling both Max Verstappen and Ricciardo into the pits from third and fifth respectively and fitting them with soft tyres.

They may have lost a place apiece, but when the safety car was recalled, their pace advantage over the Ferraris of Vettel and Kimi Raikkonen and Mercedes’ Bottas and Lewis Hamilton became clear.

Verstappen, ahead on the road, was best-placed to make the most of the turn of events, but he ran off track when trying an unrealistic move on Hamilton and then got it all wrong when he hit Vettel at the hairpin while trying to recover.

“I could see him struggling on the tyres,” Verstappen explained.  “I tried to brake late in the corner, and locked the rears a bit and hit him.“That was of course my fault. It’s not what you want and it’s easy to say afterwards that I should have waited … probably would’ve been the best idea.”

The incident comes just a week after his controversial contact with Hamilton during the Bahrain Grand Prix, one which caused a puncture that put him out of the race. While Verstappen doesn’t believe he needs to necessarily ditch his aggressive approach to passing, he is going to analyse the mistakes he made during the Chinese GP.

“At the moment it’s not going the way I like of course, but does it really mean I have to calm down? I don’t think so,” he said.“It’s just very unfortunate, those things happening. I just need to analyse everything and try to come back stronger for the next race.”

Sebastian Vettel was surprisingly non-plussed by the incident or the effect it had on his championship lead. Perhaps he was somewhat comforted by Lewis Hamilton’s result.

“To be honest I was expecting him to come earlier,” Vettel said.  “I had no intention to resist, because it was clear, with Daniel as well, that there was no point in doing so. They were just too fast on the fresh tyres so I didn’t want to compromise my race to the guys behind.  “I didn’t see him until very late so I left a bit of room as well.  “He obviously did a mistake, he locked up, which happens. We had a tailwind down the straight the whole race. I guess he misjudged and sort of compromised both of our result.

“He’s not a young driver any more, he’s done enough races. But again this can happen to you also if you’ve done 300 races.“Inside the car, you mustn’t forget that these judgments are difficult to make. But you ultimately you have to have these things in mind and make sure you don’t crash.“I mean he could have taken his front wing off, had a puncture, whatever, then it’s game over for both of us.“Obviously we’re both lucky, but that’s how it goes.”

Ricciardo made ,in contrast, no mistakes and showed how it should be done. He launched one of his trademark attacks from way back, to dive down the inside of Hamilton at the hairpin. He then picked of Vettel easily and then seized the lead from Bottas with a similarly bold move.

The Australian than powered off into the distance to secure his first victory since last year’s Azerbaijan Grand Prix, with Bottas second for the second successive race.

It was still an impressive performance by Bottas, who made up for a lack of attack in Bahrain with a decisive move on Raikkonen for the lead. Had the safety car not been called, or had Bottas pitted at the same time as the Red Bulls, he would likely have won.

Raikkonen took third – a reward for a strong opening phase, which actually resulted in him falling back, and seemingly being hung out to dry by Ferrari as they appeared to try and use him to help bring Vettel back into play.

Verstappen crossed the line fourth, but that turned into fifth as the stewards handed him a 10-second penalty for hitting Vettel. Hamilton, who has been off colour all weekend, salvaged fourth.

Nico Hulkenberg was a superb sixth for Renault, with Fernando Alonso getting his elbows out and squeezing Vettel, who was struggling with his tyres, off track in the opening sequence for seventh.

Renault’s Carlos Sainz and Haas’s Kevin Magnussen completed the top 10 in a race that will live very long in the memory.

The result tightens up the drivers’ championship, with Vettel’s lead narrowed to nine points over Hamilton, 54 to 45, with Bottas just five back on 40 and Ricciardo – who also set the fastest lap and picked up the Driver of the Day Award – leaping up to fourth on 37.

In the constructors’ stakes, Mercedes now have a one-point advantage over Ferrari, 85 to 84, with Red Bull moving into a clear third place on 55.

Daniel was not surprisingly quite surprised by the result, but non the less ecstatic with the result that moved him into the top four for the World Championship..

“That was fun, a lot of fun and I just about believe it now. From where we were yesterday you would not have believed we would be here today. For me this is a massive reward but for the mechanics and engineers, they really earned this victory. Not only for the pit stops and strategy today but for getting me out in Qualifying yesterday which enabled me to get in the fight for victory, they should be very, very proud. The problem in free practice wasn’t their fault but they did all the hard work and made today happen. At the start of the race I thought we could fight for a podium but I didn’t really expect a win; then after the safety car and when I could see the way the race was going I knew we had a chance. Once I had a sniff of victory I wasn’t going to let it go. The team made a very quick decision to stop both cars under the safety car and it was a winning decision. I have lots of emotions. On the in lap I was just smiling and I didn’t have many words, then on the podium I was nearly in tears and in the press conference I was just thinking about the whole race and also about last week; how disappointed this sport can make you feel but also how high it can make you feel. Now we can all go and celebrate tonight.”