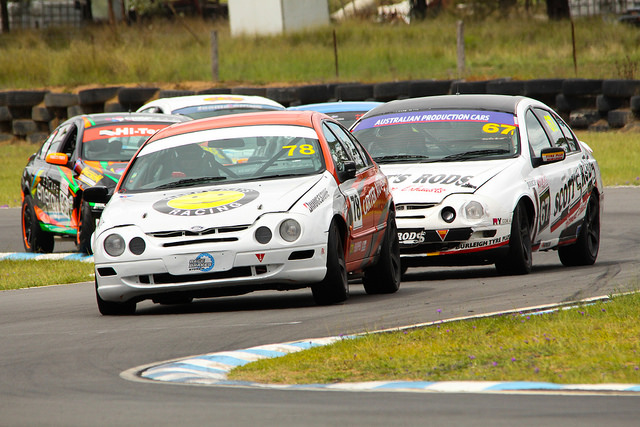 2018 is set to be a return to the glory days of Saloon Car racing in Queensland, with a new series sponsor and a reinvigorated on and off-track presence as an 11-car grid prepares for round one of the 2018 Lighthouse Electrical Queensland Saloon Car Series at Morgan Park Raceway on March 17-18.

Defending champion John Carter hopes to continue his winning form as he leads a field of new and returning competitors over a six round sprint and endurance championship split between events at Morgan Park and Queensland Raceway.

The entries for round one of the series sees a return to high-octane Ford vs Holden competition, with five of Holden’s best VT Commodores set to do battle with six Ford AU Falcons. This weekend the series welcomes the return of 2014 series champion and Warwick local Gary Beggs as well as HQ Holden racer Jamie Manteuful in a pair of VT Commodores.

“Ashley [Jarvis] is an ex Saloon Car competitor and it’s great to have Ashley continue his association with our category.

“Saloon Cars are a great category for gentleman drivers or even a stepping stone for young drivers into other categories. This is evident with several of our local drivers branching out into production car endurance events and national competition with great results.

“This partnership with Lighthouse Electrical will help promote and develop our category to enable these opportunities to continue.”

“The strictly controlled regulations and the incredible quality of competition brings out the best in drivers who are looking to develop their race craft and fine-tune their driving skills,” said Jarvis.

“As a former competitor in the series, i’m so excited to give back through Lighthouse Electrical to the series that gave me an opportunity to learn and grow as a racing driver.”

The introduction of the endurance events rounds adds a whole new dimension to the championship this season and a new element of strategy in the form of compulsory pit stops. These two events will count towards the overall Queensland Saloon Car Series, while also forming a new Enduro Cup. This opens the door for drivers in other categories to partner with current competitors to experience the cars and the close racing that the category provides.

The 2018 Lighthouse Electrical Queensland Saloon Car Series returns to action this weekend at the CAMS QLD Motor Racing Championships with private practice on Friday, before qualifying and race one on Saturday and races two and three on Sunday.