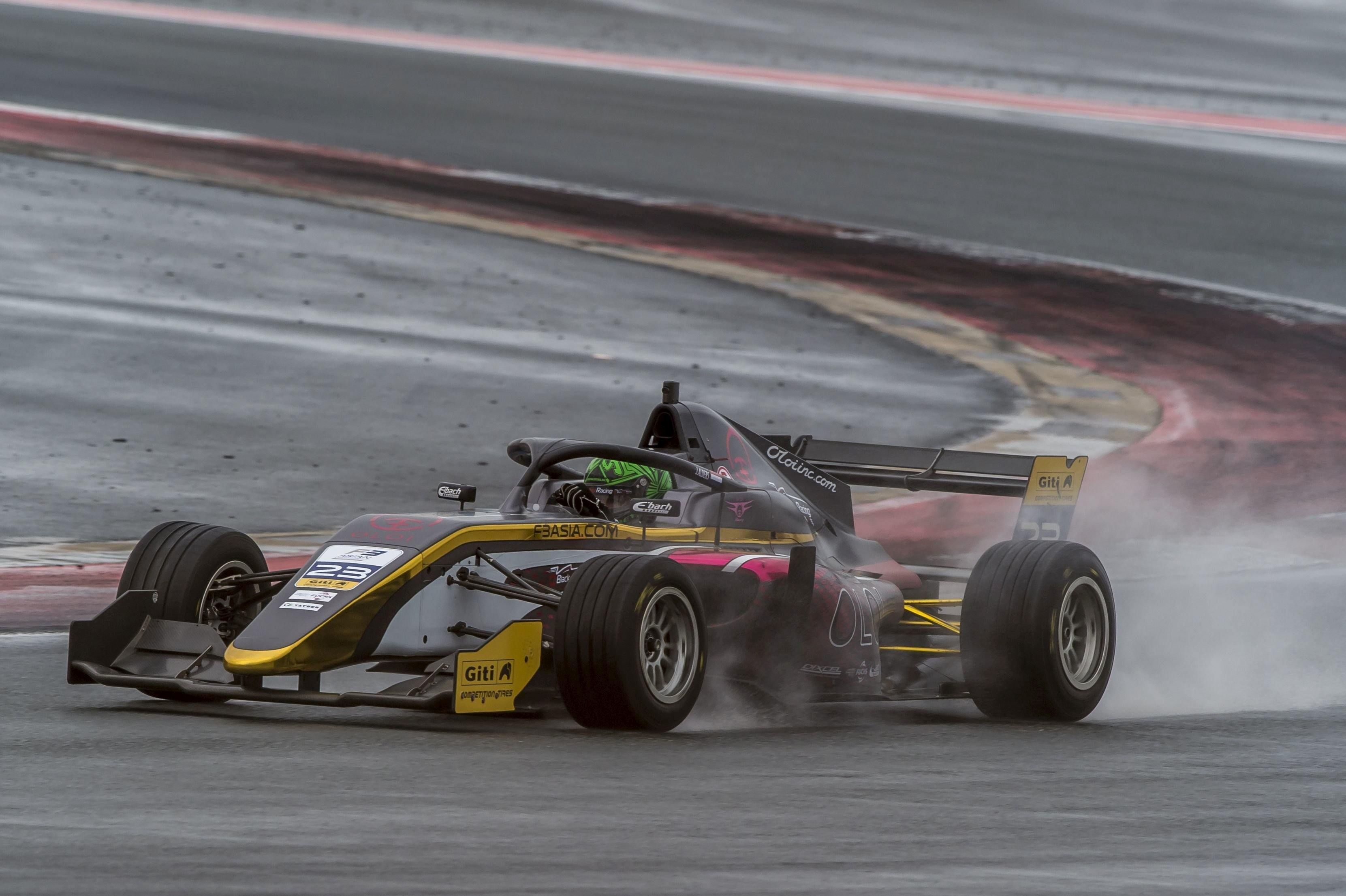 BlackArts Racing’s Joey Alders bolstered his growing reputation as rising talent and strengthened his position at the top of the F3 Asian Championship Certified by FIA Drivers’ Classification by taking a third win in Race 5, and collecting points for second place in Race 6. In a day which was high on drama, team mate Yu Kanamaru took an emphatic victory in Race 6, the first championship win of his career.

Thursday’s dazzling desert sunshine was replaced by dark skies, and overnight rain saw the teams and drivers arrive to a wet Dubai Autodrome for the morning’s Race 5. Despite the shortened 12-lap race getting underway in tricky track conditions, on the drying 5.39km circuit it was Alders who emerged victorious ahead of Pinnacle Motorsport’s Sebastian Fernandez, while a titanic last-lap effort from team mate and newly-announced FIA Formula 3 Championship driver Jack Doohan saw the 16-year-old claim the final podium place.

Race 6 was no less thrilling when BlackArts Racing completed a stellar Dubai outing after Japan’s Yu Kanamaru swept to his first F3 Asian Championship victory, crossing the line with a massive margin from Hitech Grand Prix’s Nikita Mazepin, second over the line. Third on the road ahead of Alders was reigning champion and Mazepin’s team mate Ukyo Sasahara who, as a guest driver, is ineligible to score points. However, Mazepin was later handed a five second penalty for an incident involving Alders, promoting Sasahara to second on the time sheets but earning the Dutchman 18 valuable points for second, further strengthening his position as championship leader after six races.

The F3 Asian Champion continues its Middle East debut in a few days when it arrives at Abu Dhabi’s acclaimed F1 circuit, Yas Marina. There, the field will continue the quest for championship and super licence points over three more races on Friday and Saturday, January 17 and 18.

Following persistent rain overnight, after a thorough circuit inspection and two precautionary formation laps, it was into the unknown as the lights went out and the field took to the Dubai Autodrome in the wet for the first time for the shortened 12-lap race.

Pole-sitter Hughes got away well as the pack thundered off the grid in a shower of spray. Sebastian Fernandez was quickly up from P7 to third in the order, but then Hughes ran wide in the tricky track conditions and Joey Alders rocketed into the lead from his second-row grid starting position. Fernandez next found his way past Hughes, demoting him to third in the running.

Another driver to make a confident start as the field carefully sought out the best racing line amongst the standing water was Devlin DeFrancesco, up to fourth from his P8 grid position. The Canadian led from Nikita Mazepin, Ukyo Sasahara and Pietro Fittipaldi, who mounted a challenge on the Japanese ace which resulted in the pair making contact. Fittipaldi lost his front wing, while Sasahara initially appeared to have emerged from the fracas unscathed. With a damaged car, Fittipaldi dropped down the order before finally pitting for repairs and then re-joining.

Winner of Race 4, Jack Doohan had dropped from his second row grid position and was running down in 9th behind Jamie Chadwick, Yu Kanamaru and Sasahara. However, it wasn’t long before the Pinnacle Motorsport driver was to mount an eye-catching comeback.

Chadwick was the next to fall foul of the conditions, an off dropping her down from 8th to 13th, while up ahead Mazepin got past DeFrancesco to climb to fourth, going one better as he charged past Hughes on Lap 6.

Sasahara then pitted and retired as a consequence of his earlier coming together with Fittipaldi, for which he was later handed a five-place grid penalty in his next race. It was a disappointing race for the Hitech Grand Prix outfit when Alessio Deledda also retired shortly thereafter.

With six minutes remaining on the clock, and on a quickly drying track, Alders had a comfortable margin over Fernandez and Mazepin, with Hughes holding on to fourth. But suddenly, all eyes were on Doohan who had hammered out a succession of fastest laps to close right up to the front runners.

In a final lap thriller, Doohan reeled in Hughes, who could put up little resistance against the on-form Australian. Then, in an epic last-gasp effort, Doohan deftly found his way past Mazepin to snatch the final podium position.

Mazepin had no choice but to settle for 4th, ahead of team mate Hughes who led Tommy Smith and DeFrancesco over the line. However, a season marked so far by challenges continued for Absolute Racing’s Smith, as well as for Fittipaldi. Both were handed drive throughs, converted to 20 second penalties post-race. That dropped Smith from what had been an encouraging 6th place down to 12th, one place ahead of Fittipaldi.

Paul Wong took the Masters win from rival Thomas Luedi after an eventful race for the pair.

On a dryer track than the morning’s race, but with ominous rain drops appearing as the cars stood on the grid, it was a tense gamble for the teams whether to elect to go with slicks or wets. With all eventually opting for slicks, pole-sitter Ukyo Sasahara made a good start, but Jake Hughes made a better getaway, pulling alongside and grabbing the race lead. Jack Doohan too was on the move from P5, and up to second behind Hughes as the field jostled for position as the final race of the Dubai debut intensified.

Behind Sasahara, who had been demoted to third by Hughes and Doohan, Joey Alders led from Nikita Mazepin until the pair made contact at Turn 1, dropping the Dutchman down the order. Alders immediately began his fight back, passing Pietro Fittipaldi on the outside to go fifth. Mazepin, meanwhile was later handed a five second time penalty for the incident which dropped him to 6th on the final results sheets.

Further back, Devlin DeFrancesco was the fastest mover. Having started P10, the Absolute Racing driver was up to sixth by the end of the third lap having got by Pinnacle Motorsport’s Pietro Fittipaldi.

At the front, Doohan had closed the gap to Hughes, deftly using the car to get great drive out of the corners. Behind them, Sasahara was coming under fire from team mate Mazepin, the Russian getting by and up to third. Next, Doohan made his move on Hughes by diving up the inside, but the pair made contact, tipping the Australian into a spin. Mazepin took advantage of the incident to soar past and into the lead, as Doohan dropped down the order and Hughes held on to second.

The Hitech Grand Prix trio of Mazepin, Hughes and Sasahara led the way, but not for long. Yu Kanamaru had picked his way through the pack from his P9 grid position, careful to preserve his tires on the notoriously abrasive track. Showing incredible pace, Yu closed right up to Sasahara and began piling on the pressure.

But Yu was not the only driver to threaten the Hitech Grand Prix party. Sebastian Fernandez had done a remarkable job to work his way up from P16 to fifth, a thrilling cat and mouse jostle with Alders demonstrating some uncompromising yet fair racing.

Yu Kanamaru, meanwhile, was ready to make his move on Sasahara, getting by the Japanese driver as Hughes began dropping down the order, eventually pulling into the pits and retiring. With less than ten minutes on the clock, Yu sped towards Mazepin, passing the Russian and snatching the lead. From there, he charged unchallenged to the flag and his maiden championship win with a gargantuan margin of more than 23 seconds.

Once again, the drama continued right to the flag. The final lap saw Alders finally find a way past Fernandez to cross the line fourth, behind Guest Driver Sasahara but taking points for third. With Mazepin’s penalty, Alders was awarded points for second.

In the Masters class, Thomas Luedi took his first win of the round from rival and points leader Paul Wong.

Joey Alders (BlackArts Racing) – winner Race 5
“The race was fine. I had a good start as I tried to get as little wheelspin as possible. From there, I tried to minimize the mistakes and bring it home. With about eight laps to go I saw Fernandez made a small mistake and heard on the radio I was losing time in sectors 2 and 3, so I had a bit of room to try some different lines. Then I just wanted to finish and bring it home for the team. It’s good points to extend the gap in the championship and keep building from there.”

Sebastian Fernandez (Pinnacle Motorsport) – 2nd Race 5
“Starting from P7, I had a really good start. In the first corner I think I was already P3. From then I saw I had really good pace and I had Jake Hughes in front of me.  I overtook him after two laps and after that it was head down to try and catch Joey. I was losing a lot in the first sector, and in two and three I was catching, but then I made a mistake and almost spun. That made me lose four seconds and from there on, I just stayed calm and kept second.”

Jack Doohan (Pinnacle Motorsport) – 3rd Race 5
“At the start of the race I had a few issues that were out of my control, so I had to stay cool and luckily they cleared up and I started to get the pace mid-race. I got past the little group in the middle and had a clear pace advantage there. I got to the Hitech cars on the last lap and got past Hughes at Turn 3, and then my pace advantage stayed so I was able to get past Mazepin in the last sector. I was very happy and enjoyed it a lot!”

Yu Kanamaru (BlackArts Racing) – winner Race 6
“We struggled a lot last season and that was a hard time in our life, so I’m glad we won the race. Even in the last round we struggled. Until practice we were quick, and then suddenly from qualifying we lost some pace. I’m really happy for the team. It’s really easy to lose the grip on the tires here if you fight for it, so I was being kind of cautious and make the tires last to the end, although I had to overtake some guys. That strategy worked quite well mid-race, which is why I think we had our pace to the end.”