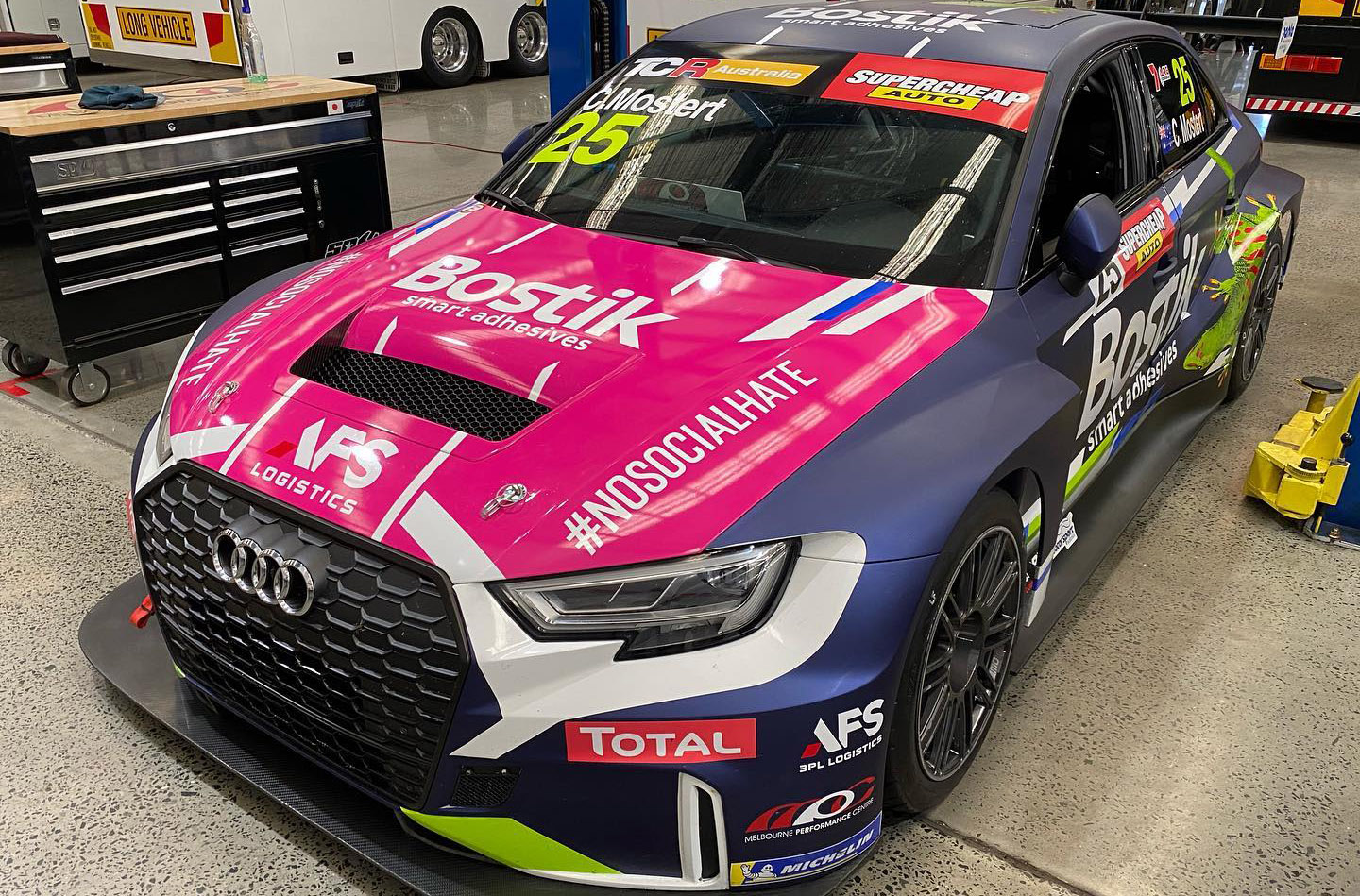 Chaz Mostert is continuing his awareness drive against cyberbullying by competing with a special pink bonnet on his Bostik Audi RS 3 TCR for Round 2 of the Supercheap Auto TCR Australia Series at Phillip Island this weekend.

After starting a social media movement on Monday that involved a simple blank ‘pink’ tile, accompanied by the hashtag #nosocialhate, Mostert and the Melbourne Performance Centre have taken it a step further, adopting the pink look – front and centre on his Audi.

Earlier this week, Mostert posted the below statement to his personal website to outline and highlight his frustrations, leading to the #nosocialhate references and, ultimately, the strong message his Audi’s bonnet will highlight this weekend.

“Most of us can handle the odd bad comment from time to time and the reason we read comments is to see all the positive amazing comments fans, friends or family post since it helps us thrive and gives us satisfaction of the amazing job we are lucky enough to have got into,” he wrote.

“What I personally can’t handle is when a friend/family member/work colleague/work place and even a rival gets absolutely grilled on social media without even knowing the person.

“I think it’s cowardly and pathetic in my eyes.

“Enough is enough and I’m not gonna shy away from the issue that’s put in place – it’s simple for people to say don’t read it just block them, but I’ve seen good people get affected to a dark place so it’s time to stand up support each other tell these people it’s not ok.

“The problem isn’t just in our sport it’s in all sports too, even the day to day life of the everyday person.

“It’s time to set a better example for the next generation’s kids, because the examples they are having set now is dangerous.

“Kids don’t just get bullied from 9-3 at school anymore, they are getting bullied on social media before and after school – how do this kids get away from that?

“Dolly (Everett) was an example of what people can really do to others.

“Where do you think kids get the idea that it’s ok to say a nasty comment on line or post something about someone that’s not positive?

“No matter how hard your life is, you don’t drag someone down to your level.

“It’s pretty simple – if you have nothing nice to say, don’t say anything at all.

“I have set up my social accounts so that you can’t comment negative things, swear, or if you attack others I do my best to get on there and ban you – Supercars and other online Media Outlets should be doing the same thing, as an online platform that’s part of your social responsibility.

“For anyone struggling please reach out to Lifeline.”

Mostert will do double duties at the Shannons Motorsport Australia Championships at Phillip Island this weekend, racing in both the Supercheap Auto TCR Australia Series and Fanatec GT World Challenge Australia Powered by AWS.