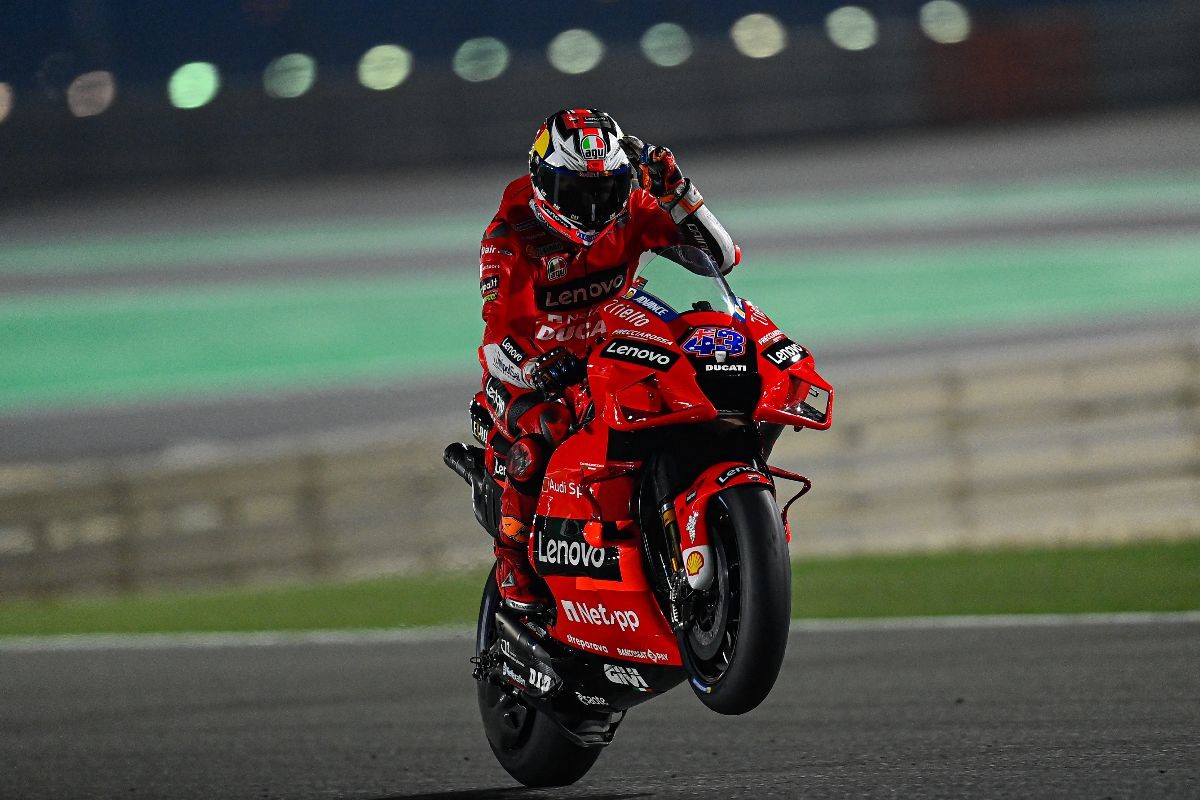 Yamaha and Ducati depose Aprilia as testing continues in the desert.

Day 2 is done and dusted at the Official MotoGP™ Qatar Test and it’s Monster Energy Yamaha MotoGP’s Fabio Quartararo back in a familiar position: the top. The Frenchman was the first and so far only rider to dip into the 1:53s, but it was mighty close as Ducati Lenovo Team’s Jack Miller ended the day less than a tenth off. Aleix Espargaro (Aprilia Racing Team Gresini) was up at the sharp end on the brand-new RS-GP once again, this time in third but just 0.212 off Quartararo.

Sunday ushered in the best conditions the riders have enjoyed since pitlane opened at Losail International Circuit on Friday afternoon, with a bit of wind swirling across the track but nowhere near as much as the previous two days of track action. The improvements came quite early too as by the midway point, HRC test rider Stefan Bradl had beaten Aleix Espargaro’s Day 1 pace. It only got faster from there.

By just over half an hour to play, Quartararo struck in the first 1:53 lap time of the test as the pace intensified under the lights, with Miller slicing up into P2 not long after. That was all Day 2 wrote at the top.

So what was on the agenda barring simple speed? Fastest man Quartararo confirmed late on Saturday evening that Yamaha have a new chassis to try in Qatar, and the Frenchman was trying a carbon swingarm although he said he wasn’t using it when he set his best lap. After struggling to get the feeling on his YZR-M1 in the first “30 or 40 laps”, Quartararo was happy by the end of 59, but said that he needs a little bit more time compared to teammate Maverick Viñales to set that quick lap time from the off on new tyres, and it’s difficult to say whether the new chassis is better or not.

Viñales also confirmed that Yamaha have been trying plenty of things and his main focus so far has been rear grip. Judging from the timesheets, it’s going pretty well for the Iwata factory. Both riders seem to be very pleased with their progress so far with Viñales ending Day 2 in P7, 0.455s from his teammate. It wasn’t a totally slick day for Viñales though as both he and test rider Cal Crutchlow crashed at Qatar’s notorious Turn 2 – both were perfectly ok.

Both Petronas Yamaha SRT men also felt great after Day 1 and although Valentino Rossi’s was in P20 the day after, The Doctor seemed upbeat as he and Yamaha go through plenty of different things to try. After a “great first day at the office”, Morbidelli’s second day at the office also looked to have gone well after finishing up in P4 – a couple of tenths shy of former teammate Quartararo.

Ever the innovators, Ducati were seen with some more new toys on Day 2 in addition to the new aero we’ve seen Michele Pirro, Miller and Francesco Bagnaia (Ducati Lenovo Team) riding wth. A new rear wheel that they’re using to monitor the forces going on at the rear end was seen, but this could just be for testing purposes and it remains to be seen whether this will be something the Bologna brand race with… 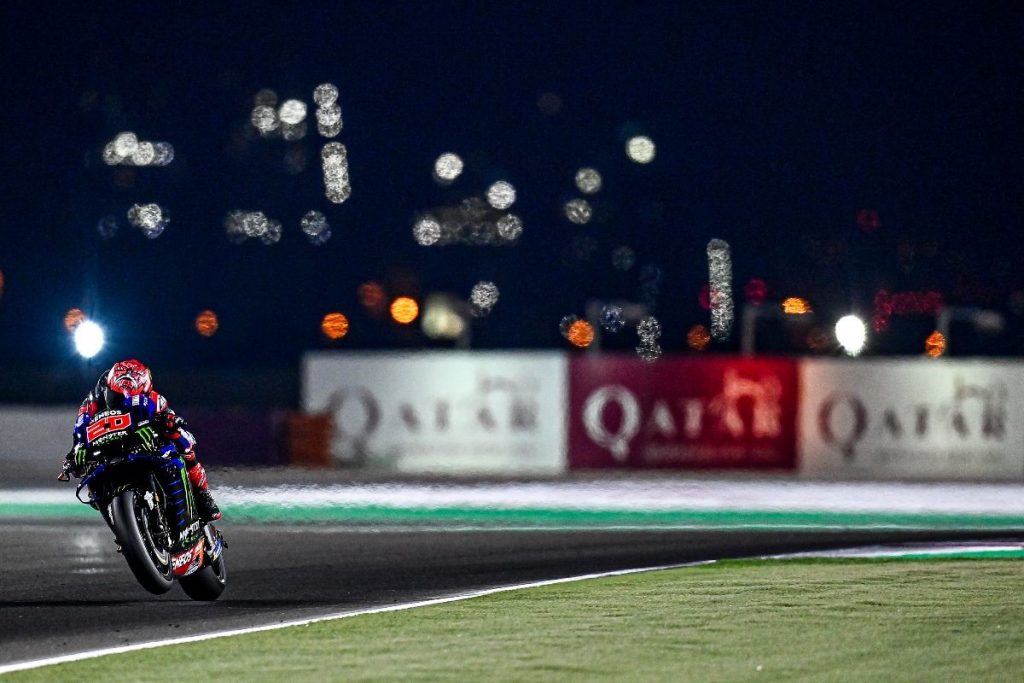 Their front-end holeshot device was confirmed today, however, and this is something that Aprilia, Honda, KTM and Suzuki have at their disposal too. The second fastest Ducati on track was Johann Zarco (Pramac Racing) in P6, with Bagnaia ending the day P9 on the timesheets. Chatting at the end of Day 2, Miller confirmed that he’s enjoying himself on the bike and was able to push a little for a time attack towards the end, and the Australian also ran with the new aero for pretty much the whole day – but hinted that something more is coming soon in classic Ducati preseason style.

Ducati’s trio of rookies were once again out on track finding their feet on the fire breathing Desmosedicis too, and it was reigning Moto2™ World Champion Enea Bastianini (Avintia Esponsorama Racing) who was the fastest of the three on Day 2. The Italian took it by just over a tenth to teammate Luca Marini (SKY VR46 Avintia) as the Italians claimed P16 and P18 respectively, a good day for both. Pramac Racing’s Jorge Martin, meanwhile, suffered his third crash in three days and completed the least amount of laps of any full-time MotoGP™ rider on the second Official Test day. Martin was perfectly fine after the Turn 16 tumble though and was able to claim P19, only  0.027s behind Marini. All three rookies have impressed so far to finish one and a half seconds off Quartararo’s pace.

Over at Aprilia, the Noale factory tried to play down their Day 1 success but on the evidence that Aleix Espargaro was third fastest on Day 2, there’s plenty of reason to be excited. The entire new package seems to be going well as Aleix Espargaro put 69 more laps on the clock, with teammate Lorenzo Savadori adding 41 to his tally. The latter finished P17, 1.630 seconds away from top spot.

Aleix Espargaro explained that he did a long run to understand what the bike is going to be like over race distance, and he had good reports but said he and Aprilia need to find a way to enable him to ride it more relaxed as the new bike is more physical than last year. The number 41 improved by half a second though and as expected, they’ve been trying lots of different things. Overall, it was a happy Aleix Espargaro with three days of pre-season testing left.

At Honda, there was some new aero to try on Day 2 and all four riders were seen sporting the new fairing during Sunday’s action. Repsol-liveried duo Stefan Bradl and Pol Espargaro were sitting pretty at the top of the timesheets at the halfway point as the latter’s adaption from KTM to Honda continues to be smooth. Eventually, Espargaro finished the Day in P12 after another 62 laps under his belt on the RC213V, with Bradl continuing to mix it with the top times to finish P5 and impress once again.

LCR Honda Castrol’s Alex Marquez crashed unhurt twice on Day 2, one at Turn 16 and one at Turn 2. Teammate Takaaki Nakagami (LCR Honda Idemitsu) also went down, the Japanese rider suffering his second crash of the Test – also at Turn 2 – but he too was ok. The duo were seen on Honda’s new fairing and finished together on the timesheets, P12 for Nakagami and P13 for Alex Marquez. Nakagami confirmed that some areas of the new fairings were good, others less so, with more testing needed to understand them better.

As aforementioned, Team Suzuki Ecstar were one of five teams to bring a front-end holeshot device to the Qatar Test. World Champion Joan Mir and teammate Alex Rins were both comfortably sitting inside the top 10 heading into the final hour of the day, with test riders Sylvain Guintoli and Takuya Tsuda out lapping as well. A new chassis is on the agenda for the Hamamatsu factory as well as some other as yet unconfirmed parts, but so far it looks like all is well in the silver and blue ranks as they packed up early on Day 2.

Mir confirmed that he enjoyed his second day on track, rediscovering his feeling from 2020 was on the agenda and the number 36 did exactly that. One of Mir’s main aims is to improve his qualifying pace, but the Spaniard said today wasn’t the day to properly delve into that. Rins confirmed he tried a new swingarm which made the bike a little more stable, and the number 42 also tried the 2022 engine that Guintoli has been testing. Great reviews, especially on top speed, were given.

KTM were another manufacturer that debuted a new fairing today in Doha. This was narrower than the previous one and it was pictured on Miguel Oliveira’s Red Bull KTM Factory Racing machine, with initial feelings seeming positive. However, with the wind, the word was that it’s difficult to properly tell how useful it is. Oliveira was the fastest RC16 rider on circuit though, claiming P11, 0.726s from Quartararo.

Brad Binder (Red Bull KTM Factory Racing), meanwhile, described his day as a “little bit challenging” and suffered two crashes towards the end of the day. The South African was fine and although P24 on the timesheets, he confirmed everything is running pretty smoothly. The number 33 also ran with the updated fairing. Danilo Petrucci and Tech3 KTM Factory Racing teammate Iker Lecuona were P21 and P23 respectively, a quiet day for the orange men as Petrucci settles in and Lecuona starts only his second MotoGP™ season.