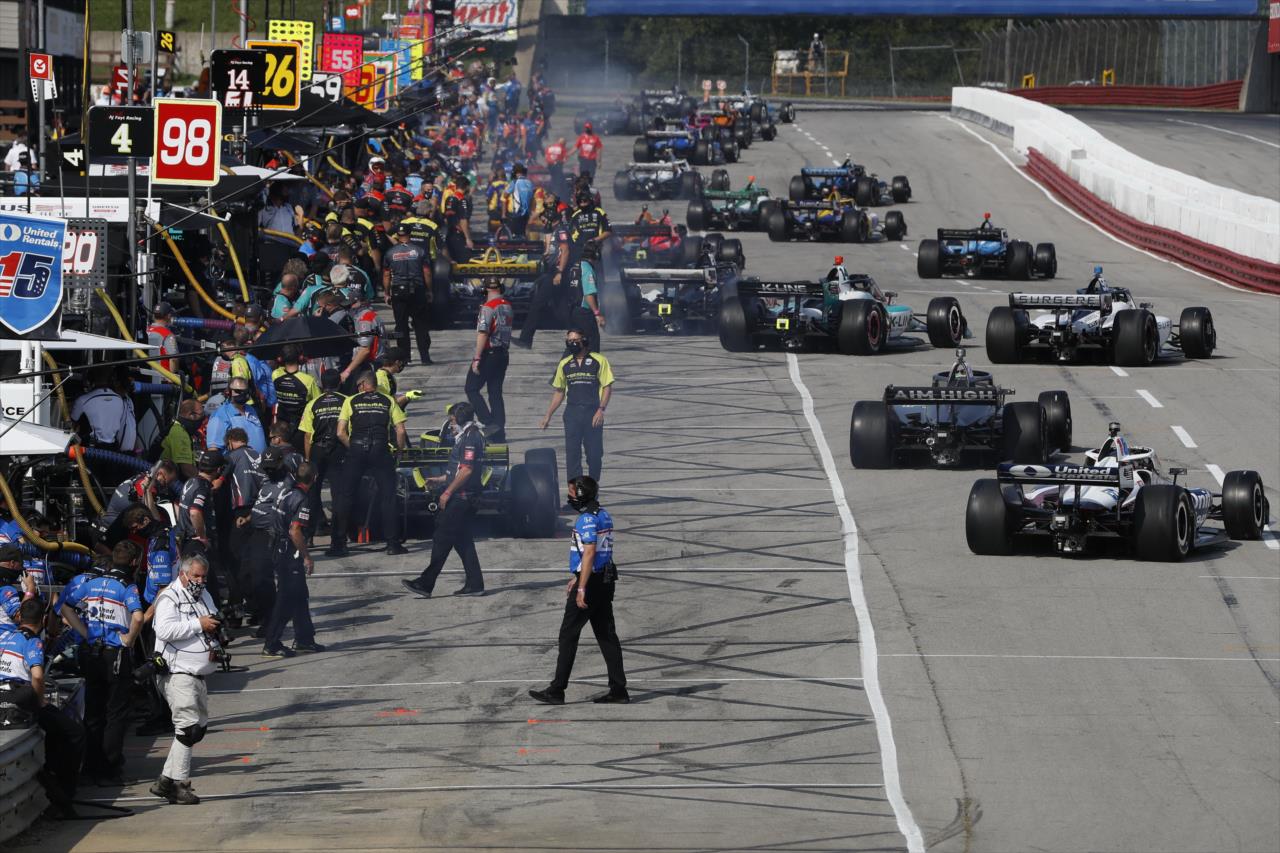 INDYCAR officials announced a 17-race schedule for the 2021 NTT INDYCAR SERIES, including expanded network TV coverage, two thrilling high-speed races at Texas Motor Speedway prior to the Indianapolis 500 and a return to its other pillar events.

The 2021 season will begin Sunday, March 7 on the streets of St. Petersburg, Florida, marking the 10th consecutive year that St. Petersburg will host the launch of a new season. That event will be the first of nine races on NBC network television – a schedule that also includes the historic Grand Prix of Long Beach in April.

“We’re really pleased that the current plans provide for one additional race on NBC’s network than we had this year,” said Mark Miles, president and CEO of Penske Entertainment Corp. “In particular, the season will start with NBC coverage of the St. Petersburg event, a spectacular start for those in attendance and for those watching from home.”

“The INDYCAR and NBC Sports partnership continues to be mutually beneficial, growing in viewership and providing adrenaline-packed entertainment to a national sports audience,” said Michael Perman, vice president, programming, NBC Sports. “We’re looking forward to providing increased exposure to the series in 2021, including network coverage of the season opener in St. Pete and the finale in Laguna Seca. Additionally, as a marquee event of our Championship Season, we’ll also provide wall-to-wall coverage of the Indy 500 on NBC, an international sporting spectacle filled with speed and exceptional drama.” 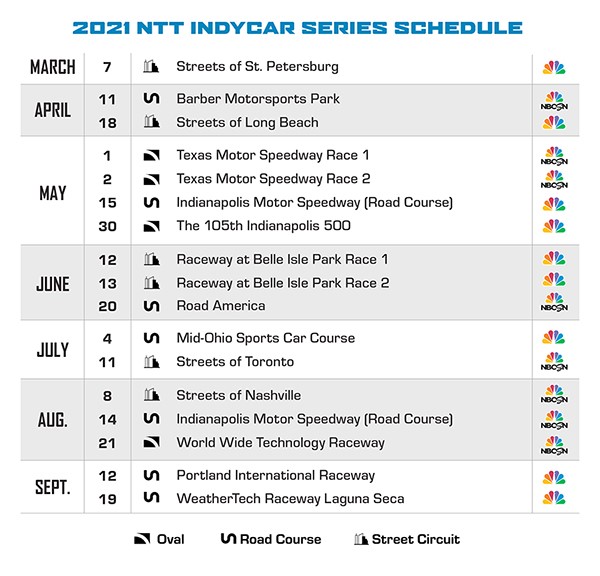 For the first time, the NTT INDYCAR SERIES will race at the Texas Motor Speedway in the month of May during a doubleheader weekend Saturday, May 1 and Sunday, May 2. The move places a crucial oval on the schedule before the 105th Running of the Indianapolis 500 presented by Gainbridge, scheduled for Sunday, May 30.

“The changes in Texas are important and exciting,” Miles said. “To have not just one oval race, but two, before racing at the Indianapolis Motor Speedway in May is strategically very important to the growth of the event, as well.”

The summer months kick off with the Detroit doubleheader moving to the second weekend in June, Saturday, June 12 and Sunday, June 13, while the Mid-Ohio Sports Car Course will host INDYCAR during the July 4 holiday weekend.

In August, the NTT INDYCAR SERIES enters an important stretch, with consecutive races on a street course, road course and an oval highlighting the audacious athleticism required to win a championship. That important run begins with INDYCAR’s debut on the on the streets of Nashville, Tennessee, for the first Music City Grand Prix on Sunday, Aug. 8. The three-day international festival of speed and sound will be staged on a temporary grand prix circuit in downtown Nashville and around the Nissan Stadium campus – home of the NFL’s Tennessee Titans.

“We couldn’t be more excited about the opportunity to race on the streets of Nashville, which we think will be a blockbuster event in its first year,” Miles said. “It’ll help raise the bar – not just for great racing – but for a great festival around INDYCAR.”

“After the proof of concept this year,” said Miles, “we look forward to having an INDYCAR Grand Prix during the Brickyard weekend – and inviting fans be a part of it. We know the strong Midwest affinity for INDYCAR racing and the love for INDYCAR drivers will help that weekend reach new levels.”

The three-weekend stretch culminates with a return to the oval at World Wide Technology Raceway, Saturday, Aug. 21.

Several traditional races return in 2021. Over half of the events on the NTT INDYCAR SERIES schedule have been on the calendar for 16 or more years, with Long Beach and Mid-Ohio (36 years) leading legendary visits to Detroit, Road America, Toronto and Portland International Raceway.

The 2021 NTT INDYCAR SERIES season champion will be crowned Sunday, Sept. 19 at WeatherTech Raceway Laguna Seca, wrapping up the season on NBC.

2021 event start times will be announced at a later date.