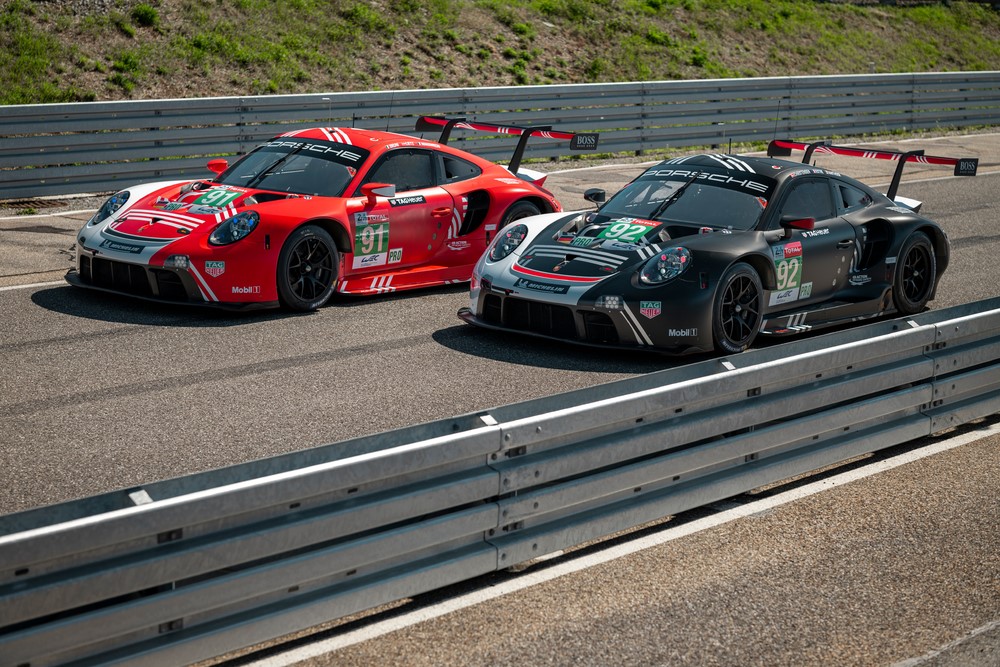 This weekend Porsche will take on the challenge of the Le Mans endurance classic with vehicles finished in special designs. The two 911 RSR fielded by the Porsche GT Team tackle the hotly contested GTE-Pro class featuring red-white and black-white liveries – to commemorate the first of 19 overall victories at the 24 Hours of Le Mans 50 years ago.

With crisp lines and shapes, the special colours of the foil wrapping resemble the digital RSR that successfully contested the virtual Le Mans race on 13-14 June. The two 515 hp factory cars will carry the lettering “1970” on the front lid and the roof. In that year, Britain’s Richard Attwood and Hans Herrmann from Germany clinched the first overall victory at Le Mans for the sports car manufacturer from Stuttgart at the wheel of the legendary Porsche 917.

On that occasion, the vehicle fielded by Porsche KG Salzburg flew the national colours of Austria. The No. 91 Porsche 911 RSR will race with the very same red-and-white paintwork. On the No. 92 sister car, black replaces the red. Of the ten 911 racing cars to line up on the grid, eight 911 RSR are campaigned by customer teams in the GTE-Am class.

The race
The race on the 13.626-kilometre Circuit des 24 Heures is the highlight of the World Endurance Championship (WEC) every year. Contrary to the original plan, the classic, which was held for the first time in 1923, was deferred to September due to the coronavirus pandemic. The three-month postponement means different weather and light conditions. The latest generation 911 RSR runs for the first time at the world’s greatest long-distance race. The cancellation of the critical pretests throws a special challenge at the Porsche GT Team, because testing is not possible on the Circuit des 24 Heures: Most of the storied racetrack in the south of the city of 150,000 consists of public roads. Under normal conditions, hundreds of trucks and cars drive over the famous Mulsanne straight on their way from Le Mans to Tours. Treacherous ruts pose special challenges, especially in the rain.

The Porsche drivers
The regular WEC drivers Gianmaria Bruni from Italy and Austria’s Richard Lietz share the wheel of the No. 91 Porsche 911 RSR. Like last year, they will receive support from Frenchman Frédéric Makowiecki. In 2018 and 2019, the experienced trio achieved second place in the GTE-Pro class. In the identical sister car sporting the starting number 92, the reigning World Endurance Champions Michael Christensen from Denmark and Kévin Estre from France are reinforced by Belgium’s Laurens Vanthoor, the defending titleholder of the IMSA WeatherTech SportsCar Championship. Two years ago, the three drivers brought home a commanding class victory at Le Mans with the 911 RSR decked out in the legendary Pink Pig design. At the 24-hour race in the northwest of France, the WEC awards double points for the individual categories. In the manufacturers’ classification, the Porsche GT Team ranks second after six of eight rounds. The reigning champions Estre/Christensen also sit second in the drivers’ category, with their team colleagues Bruni/Lietz currently in fifth place.

The Porsche customer teams
In the GTE-Am class, three experienced customer squads field a total of eight 2017-spec Porsche 911 RSR. In the cockpit of the No. 56 entry, last year’s Le Mans class-winning Project 1 team put their faith title defender Egidio Perfetti from Norway, the newly crowned champion of the Porsche Mobil 1 Supercup Larry ten Voorde from the Netherlands and Italy’s Matteo Cairoli. The No. 57 sister car is shared by the American Ben Keating, Felipe Fraga from Brazil and Jeroen Bleekemolen from the Netherlands. The team from Lohne in Germany’s Lower Saxony will announce the driver line-up for the No. 89 car at a later date. In the No. 86 entry, Gulf Racing relies on the all-British crew of Benjamin Barker, Michael Wainwright and Andrew Watson.

Dempsey-Proton Racing fields four Porsche 911 RSR at this year’s 24 Hours of Le Mans. The team owner Christian Ried (Germany) shares driving duties in the No. 77 vehicle with the Australian Porsche works driver Matt Campbell and Riccardo Pera from Italy. Manning the No. 88 sister car is the Porsche Young Professional Thomas Preining from Austria, America’s Dominique Bastien and Adrien de Leener from Belgium. Proton Competition campaign the No. 78 car with drivers Horst Felbermayr Jnr. from Austria, Max van Splunteren from the Netherlands and Michele Beretta from Italy. In the 99 entry, Vutthikorn Inthraphuvasak from Thailand joins forces with the Belgian Lucas Légeret and Julien Piguet from France.

Comments before the race
Fritz Enzinger (Vice President Motorsport): “I’m delighted that the 24 Hours of Le Mans can be held during the coronavirus pandemic – despite the very challenging conditions. I would like to thank the ACO and WEC management who worked alongside the authorities, manufacturers and teams to make this happen. In June, we gave our fans a great show with the virtual 24 Hours of Le Mans. Now the real race has arrived. I’m positive that we’ll provide our loyal fans with another exciting event – and I hope that the thousands of spectators can return to the racetrack next year.”

Pascal Zurlinden (Director Factory Motorsport): “Le Mans will be completely different this year because of the lack of spectators and the heavily modified schedule. Still, I’m expecting a fantastic highlight for the fans. This year’s event is hugely significant for Porsche. Fifty years ago, Porsche’s winning streak began with the first outright victory for the 917. We commemorate that triumph with spectacular vehicle designs and special pit fit-outs. Our sporting aim is clear: After our win at the virtual 24 Hours of Le Mans in June, we now set our sights on claiming Porsche’s 109th class victory with the real 911 RSR.”

Alexander Stehlig (Head of Operations FIA WEC): “We’re competing under completely different circumstances. The climatic conditions in September are different compared to June. There are still some unknowns in terms of weather, temperatures, performance and tyres. We’ll use the existing data from our WEC and IMSA campaigns as well as the insights gained from testing so that we can hopefully be well sorted for the first free practice session. We’re competing for the first time with the Porsche 911 RSR-19 here. It’s not only new for us, but also for the ACO, which handles the BoP. We have complete confidence in the expertise and experience of the specialists. Remaining unchanged, however, are the two driver trios in the cockpits. This will be their third year of working together at Le Mans. That’s a strength we will build on.”

Matt Campbell (Porsche 911 RSR #77): “Le Mans is held this year under different conditions, but I’m happy that we can drive there at all. It is and remains the biggest event of the year. Christian Ried and I won our class in 2018 – now I’m eager to repeat that with Riccardo Pera. We finished the previous WEC race at Spa-Francorchamps on the second podium step. We now want to take a big step forward in the championship with a success at Le Mans.”

Gianmaria Bruni (Porsche 911 RSR #91): “I’m very excited to see our Porsche 911 RSR decked out in the special Le Mans livery in real life. I’ve only seen the artwork and it looks fabulous. Turning up at the track with our stylish and fast cars on the anniversary of Porsche’s first overall victory at Le Mans is both a motivation and an obligation for us. We’re aiming for class victory. In the past two years, we finished in second place with our number 91 car. If we can make it over the distance without incidents, then nothing should stand in the way of a great success.”

Richard Lietz (Porsche 911 RSR #91): “The fact that Le Mans is being held in September this year will have a huge impact on the race. It gets dark earlier on Saturday and light much later on Sunday. We’ve never experienced such a ratio between day and night before at this 24-hour classic. What’s more, we’re facing very changeable weather. All of this promises an extremely thrilling race. Let’s see how the competition is in the GTE-Pro class. Our tests in the lead-up to Le Mans went well. Class victory is our clear goal.”

Frédéric Makowiecki (Porsche 911 RSR #91): “Le Mans will feel very different this year. I’ll really miss the spectators. We’re always very pleased to have their huge support in the paddock and especially at the drivers’ parade in the city centre – but unfortunately, that’s not possible this year. There are also some changes in the race operations. The weekend schedule is strictly streamlined, the test-day is cancelled and the chance of rain is higher in September. Our goal with the number 91 car is clear: After finishing the last two Le Mans races in second place, we’re determined to win our class this time. ”

Kévin Estre (Porsche 911 RSR #92): “We’re returning to Le Mans with the very best memories. In 2019, we won the WEC championship title here. As a Frenchman, Le Mans is a home race for me. I’ll miss the fans very much. Traditional events like the autograph session in the pit lane and the drivers’ parade are a huge part of the special charm. In terms of the sporting challenge, it’ll be extremely exciting: Our current 911 RSR has been fast everywhere so far. I hope this will be the case at the special Le Mans circuit. The distinctive design of our number 92 car looks great – I think the black areas suit the shape of the 911 RSR perfectly.”

Michael Christensen (Porsche 911 RSR #92): “We’re heading to the highlight of the year with high expectations. At the previous WEC race at Spa-Francorchamps, we celebrated our first win of the season with the number 92 car – that was important for the championship and it gives us extra motivation for Le Mans. Even without a pretest, we’re very well prepared for the 24-hour classic.”

Laurens Vanthoor (Porsche 911 RSR #92): “The time plan for this year is totally different from usual. The very long Le Mans week seems almost like a normal WEC race weekend. It’s important to be well prepared with the new 911 RSR right from the start of the first session. We prepared ourselves to the best of our ability during the test drives. Our team scored a class victory at Le Mans two years ago. I’m confident that we’ll be part of the fight for victory in the GTE-Pro class again in 2020.”

Matteo Cairoli (Porsche 911 RSR #56): “I can hardly wait to contest my fourth 24 Hours of Le Mans. Our driver line-up is extremely strong this year, the car has been perfected and is good for a win. If we can do a flawless job and keep out of any trouble, we have good chances. I’m convinced that we could end up on the podium. Victory is also within the scope of our possibilities. We’re optimally prepared.”

Benjamin Barker (Porsche 911 RSR #86): “I’m very excited about our return to Le Mans. In the past, we’ve always had the pace in the 24-hour race, but our results didn’t reflect this. That needs to change this year. The atmosphere at the racetrack will be very different without the fans, but Le Mans in 2020 will have the same sporting significance as it’s always had.”