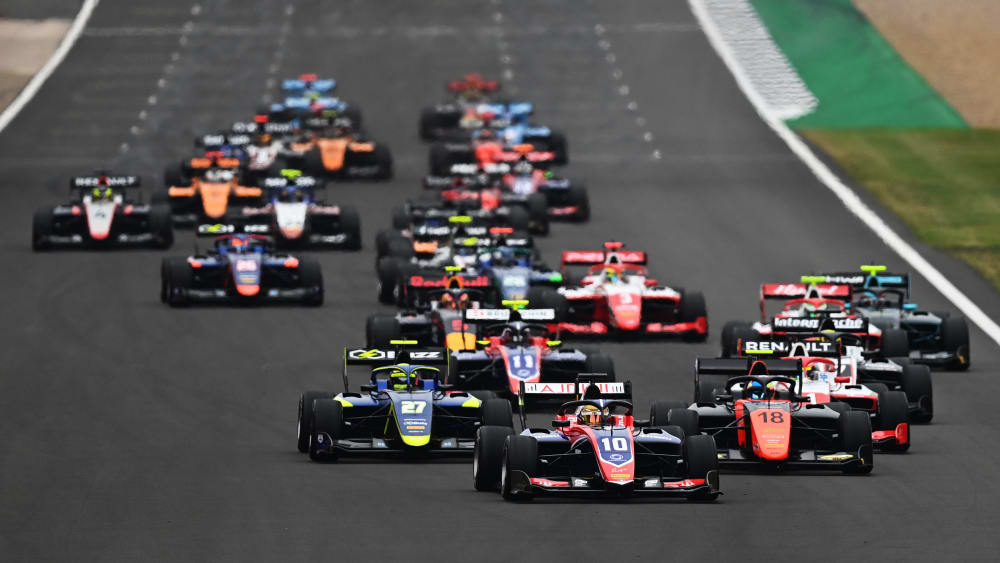 It was a case of who dares wins in Race 2 at Silverstone, as Bent Viscaal took a dramatic last lap victory over Lirim Zendeli for his first ever win in FIA Formula 3 victory.

The MP Motorsport racer had spent the entirety of the race behind the Trident driver in second, but left enough life in his tyres for an audacious move on Zendeli down the final straight, finishing a mere tenth of a second ahead of the German. Viscaal becomes the eighth different winner of the season from just 10 races. 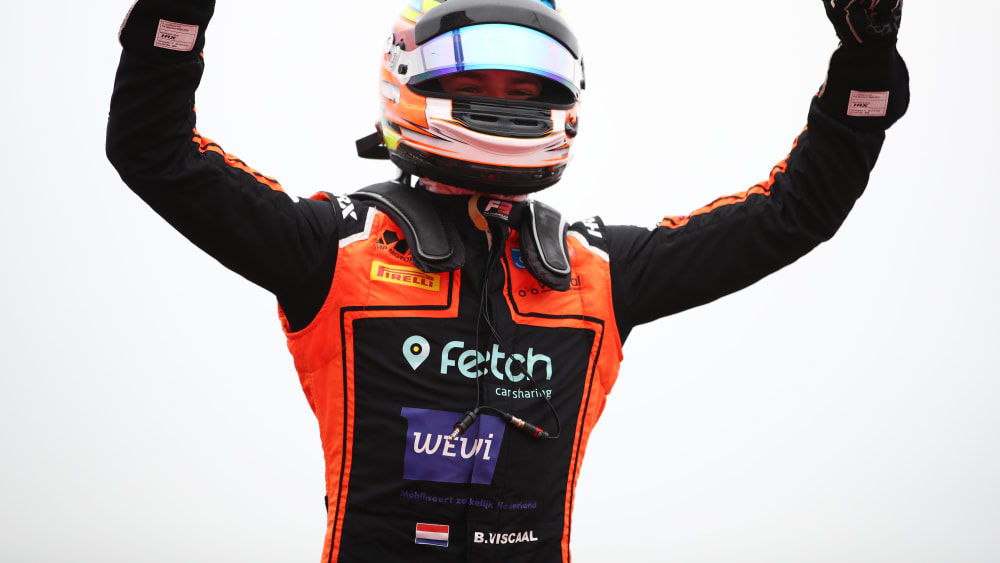 Théo Pourchaire clung on to third at the line, surviving a last lap battle of his own with Liam Lawson, who was forced wide and fell to fifth behind David Beckmann.

Logan Sargeant, who took the Championship lead with a Race 1 victory, suffered from contrasting fortunes on Sunday as he was forced to retire from the race, coming off worst in a battle with Cameron Das.

After a swelteringly hot start to the weekend in Great Britain, dark clouds loomed over Silverstone and provided the field with a different type of challenge, as cooler track temperatures meant a battle to warm up the Pirelli rubber without heavily degrading it.

Starting at the front on just his second round of F3, Ben Barnicoat got off to a poor start from pole and was swallowed up by the field. Zendeli made the most of the Carlin Buzz Racing driver’s sluggish getaway and fired into P1.

Barnicoat had initially dropped all the way to fourth but managed to tussle his way back to third, ahead of Pourchaire, at Brooklands.

Lukas Dunner and Calan Williams brought out the Safety Car as they collided and went off the road. Racing resumed on Lap 6 and Zendeli dashed into the distance, setting the fastest lap as he did so.

Oscar Piastri hadn’t enjoyed the greatest of rounds at Silverstone. The PREMA racer had suffered from mechanical issues all weekend and lost the Championship lead to Sargeant on Saturday, but had an opportunity to fight back in Race 2 before coming to blows with title rival Lawson in a battle for fifth. He went wide but avoided a puncture, and dropped down to eighth.

Sargeant’s Sunday wasn’t going particularly well either. The Championship leader was locked in battle with his fellow American, Das, but the two touched wheels which sent Sargeant off the road. He returned to the pits with damage and was forced out of the car into retirement.

There was then a problem for Barnicoat. The Briton was forced to pull over on to the side of the road from third and retire.

Lawson had avoided damage in his earlier battle with Piastri and with the Australian dropping back, the Kiwi was able to switch his focus and catch up with Beckmann, sliding ahead of the Trident for fourth.

Zendeli and Viscaal had been left alone out in front, with a 7s gap between themselves and Pourchaire in third. The Dutchman had managed to remain in DRS range of the race leader and retained sufficient life in his tyres for a late lunge.

It looked as if Zendeli would hold on, but Viscaal made his move at Copse and clawed ahead of the Trident. The German wasn’t about to hand over the win easily and fought back ahead through Vale. Yet, their battle still wasn’t over, Viscaal swung around the Trident for a second time at the final corner and sparked a drag race to the line. The MP Motorsport driver eventually came out on top by just 0.1s.

Lawson attempted a similarly risky move on Pourchaire for third, but the Kiwi ran wide and fell down to fifth behind Beckmann. Piastri managed to get ahead of Hughes for sixth, while Frederik Vesti took the final points’ position.

Sargeant retains first in the Championship on 106, just a single point ahead of Piastri in second place. Beckmann is third on 82.5, ahead of Lawson and Vesti.

The other Australian drivers had a weekend to forget, Jack Doohan finished in 22nd place, Alex Peroni was 24th and Calan Williams had a DNF.

In the Teams’ Championship, PREMA Racing are first on 281.5 points, ahead of Trident on 132.5 and ART Grand Prix on 114. Hitech Grand Prix are fourth and MP Motorsport fifth.

“Thank you very much to MP Motorsport for the great car today. It was absolutely incredible. All of the hard work we have done for the past four races has finally paid off with a win.

“We were close in Budapest but got some penalties. To get the win like this in dry conditions shows that we are competitive. I am now looking forward to the rest of the season.”

Piastri will have an opportunity to reclaim the Championship lead in just a weeks’ time when the field head to Barcelona for Round 6 of the season.