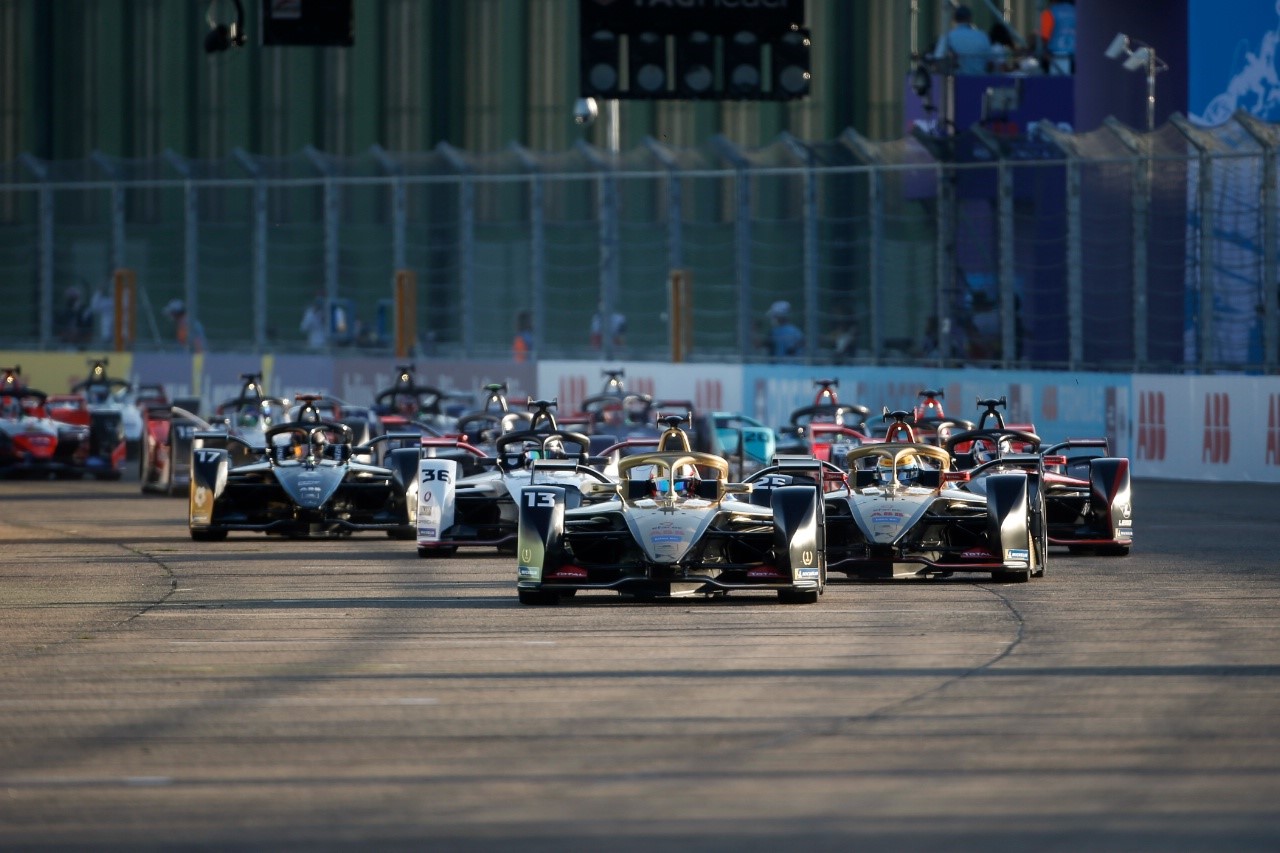 DS Techeetah’s Antonio Felix da Costa, sealed an imperious race win in the Berlin E-Prix presented by CBMM Niobium Round 6, securing a maximum 30-point score as well as the qualifying benchmark, Super Pole, a lights-to-flag victory and fastest lap in the process.

The Portuguese driver was able to fly over the line with a precisely-measured 0.0 percent of his available energy remaining ahead of TAG Heuer Porsche driver Andre Lotterer and Envision Virgin Racing man Sam Bird.

Da Costa fired off the line into the evening twilight at the Reverse Berlin Tempelhof Circuit in as consummate a manner as he’d sealed the Julius Baer Pole Position – pulling out a second on team-mate Jean-Eric Vergne by the end of the first tour.

The pair scampered clear of TAG Heuer Porsche’s Andre Lotterer, who was becoming the cork in the bottle as the race approached quarter-distance, with the experienced German throwing all sorts of defensive shapes in the braking zones and on regen to keep those behind at bay.

Nissan e.dams’ Sebastien Buemi, a winner in Berlin in both 2016 and 2017, homed in on the back of Lotterer’s 99X Electric amid a gaggle of six cars forming between the Porsche man in third and Lynn in 10th spot.

The Swiss driver was caught out by Nyck de Vries, however, with the Mercedes-Benz EQ man stealing through to take fourth on lap nine.

Envision Virgin Racing’s Robin Frijns found himself in trouble with some heavy front-end damage caused on the exit of turn two after a coming-together in an attempted move on Max Guenther (BMW i Andretti Motorsport) as the pair squabbled over 11th, enforcing a period under the Safety Car.

For those looking at the diffuser of the two DS Techeetahs out-front, hopes were pinned on something of a reset following the caution, but at the half-way stage it was looking unlikely.

With ATTACK MODE coming into play during the latter half of the E-Prix, Lotterer and de Vries’ struck up their battle once more. The Mercedes driver made use of the extra 35 kW boost and Lotterer was made to pay for missing the activation point by the Dutchman, who made a move for third stick on lap 18.

It wouldn’t last for de Vries, however, as he slipped up and lost out to Lotterer and a surging Sam Bird (Envision Virgin Racing) in one fell swoop.

Stoffel Vandoorne, meanwhile, was tearing through the pack. The Belgian had started 16th but made the most of ATTACK MODE to gain ground, first passing Guenther’s BMW on lap 20 for 11th and onwards into the top ten beyond Alex Lynn, who, on his Mahindra Racing debut, was now getting shuffled down the order after a strong start.

Vandoorne continued his charge, taking ninth with 15 minutes to run, whilst Massa – in combat with the Mercedes driver – found himself in the wall and the cause of a late full-course yellow.

The restart threw a cat amongst the pigeons, though da Costa was happy and able to charge away into the distance, leaving everybody else to it.

His team-mate, meanwhile, was spiralling down the order. Bird, Lotterer, Vandoorne, D’Ambrosio, Mitch Evans, Buemi and Guenther all got through but in the pinch, Evans (Pansonic Jaguar Racing) was touched by Guenther and sent spiralling down to an eventual 15th position – an early blow for the man who entered the race second in the standings.

Vergne eventually collapsed to 20th after a muscular last-lap move from Lucas di Grassi – the Audi Sport ABT Schaeffler racer having clambered through the pack to ninth from 21st on the grid.

Da Costa was utterly serene out front in the final throes whilst the chaos unfolded behind, but it was a close-run thing in the end as the Drivers’ standings leader crossed the line with 0.0 percent of his usable energy remaining though he was able fly over the line without issue – perfectly judged!

Lotterer came home second, some 5.5 seconds back, whilst Bird, de Vries, D’Ambrosio and Vandoorne rounded out the top six. 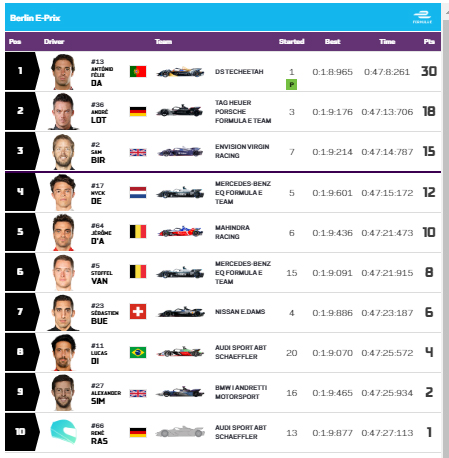 Da Costa’s maximum 30-point haul left him 40 points clear of Evans in the standings, with Guenther climbing to third, whilst DS Techeetah extended its lead over BMW i Andretti Motorsport in the Teams’ table.

“Everyone’s assuming I have to win the title but I take that pressure well,” said da Costa. “It means it’s an important thing and yes, I want to win it, but there’s still a really long way to go.

“Hats off to the team. We’ve really put it all together and all the work heading here has come off. I moved here because I wanted a quicker car.

“Obviously, it’s fast and I’m so grateful. I wanted to put myself in a position to win races in my career and it’s happening.”

The Portugeuse driver also paid tribute to his countryman Helder Moreira, who tragically lost his life this week in Berlin prior to the E-Prix.

“Coming here with six races to go, the fight for the title is on and the pressure is rising. I do really want to win and if we keep doing things as we did today, we have a good shot at it. Hats off to the team not only for what they did today, but for the hard work they put into the build-up to this moment. I moved here because I wanted a quicker car, since I want to put myself in a position to win races.”

“Second place is a good starting point. But I have some mixed feelings about missing the first ATTACK MODE activation, as it put me in a difficult position. I had a good car and maybe without that slip I could’ve challenged Antonio for the win. We’ll keep working hard and hopefully the car will continue to be as good as it was today.”

“I’m very pleased with the team and the result. It’s been a bit of a rocky year for us and hopefully today will mark a restart of the season. Also, I’m a bit disappointed for not finishing in second, but I was low on energy in the last couple of laps. There’s still some work to do on the car, but we have a good base ready for tomorrow.”