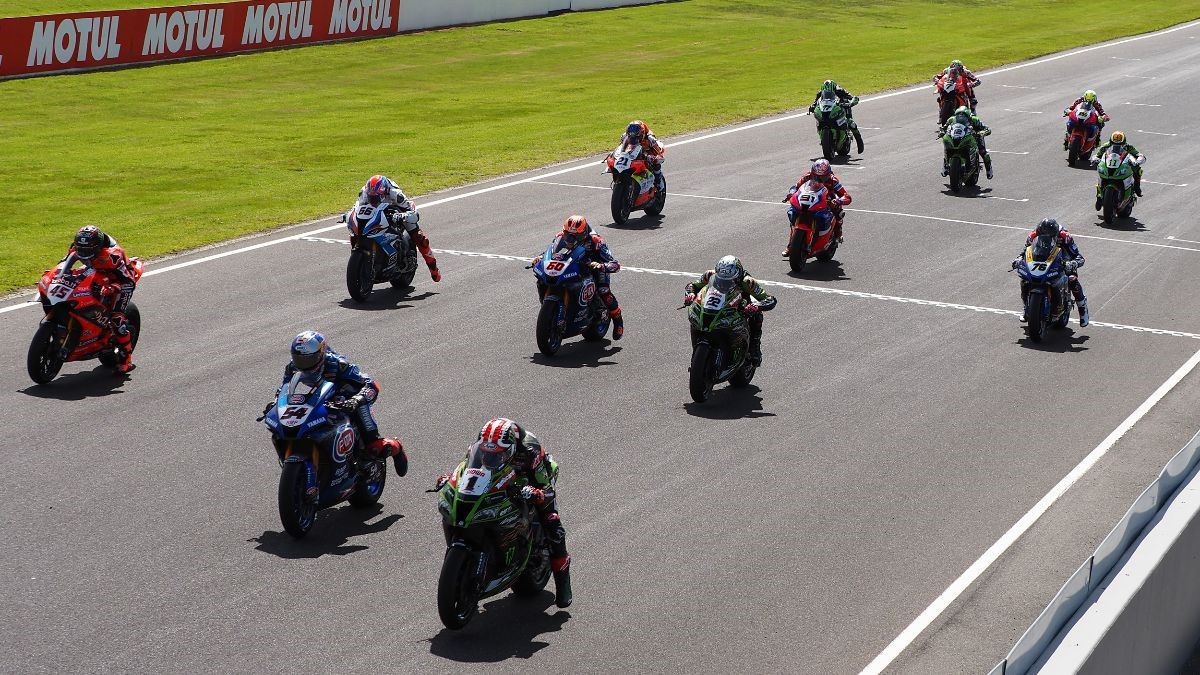 After the hardest of times away, the 2020 MOTUL FIM Superbike World Championship is back this weekend at the Circuito de Jerez – Angel Nieto, Spain. The Championship’s first round of the season got underway with plenty of drama in Australia back in early March, bringing three different winners in one weekend for the first time in history. Now, with the heat of Jerez looming, who will be able to keep their cool as the battle for the title resumes.

Leading the Championship is Alex Lowes (Kawasaki Racing Team WorldSBK), after a phenomenal Kawasaki debut Down Under. Victorious in Race 2 and a podium in Race 1, Lowes’ consistency means he is the man to beat coming into Spain. However, bad luck during the 2019 Spanish Round at Jerez saw himself and current teammate Jonathan Rea clash at the final corner on the last lap, sparking a rivalry which is yet to reignite in 2020. Two fourth places are the best he’s managed, whilst fourth-placed in the Championship Rea has two wins to his name at Jerez, whilst he wrapped his first title up there in 2015. Last year, he achieved just one podium with second in Race 2.

Three third-places cement Scott Redding’s (ARUBA.IT Racing – Ducati) in second overall, with the rookie Brit showing consistency in abundance at Phillip Island. Having tested at the Jerez circuit back in January and raced their numerous times in his MotoGP™ career, Redding knows the venue, although very few have raced there in the high heat of summer; another new test for him to tackle. Teammate Chaz Davies lies eighth in the Championship and has previously secured three wins at Jerez and was in the podium battle in Race 2 last year until a crash with Marco Melandri.

Third in the standings and the first race winner of the year, Toprak Razgatlioglu (PATA YAMAHA WorldSBK Official Team) was a prominent feature at Phillip Island. The first Turkish rider to lead the standings after Race 1, he is ready to keep on breaking records. His teammate Michael van der Mark is fifth overall and will aim for his first podium of the season at a track at which he won at in 2019 in Race 2. The 2014 WorldSSP Champion goes into the return to action with his future secured, as he heads to BMW for 2021. Is the pressure off him for the remainder of the season?

Following on from a successful opening round at Phillip Island and good testing at the Circuit de Barcelona-Catalunya and MotorLand Aragon, Team HRC are determined for a strong Jerez meeting. Home hero Alvaro Bautista lies sixth overall and took two wins at the track in 2019 and hopes to give Honda a first podium at the track since Michael van der Mark in Race 1 of 2015. For Leon Haslam, he topped the times at Aragon and aims for his first podium at Jerez since Race 2 of 2015. Will they be able to conquer the Honda at Jerez and make a return to the front of the WorldSBK field?

The BMW Motorrad WorldSBK Team have been busy with testing schedules in the break. From a private test at the EuroSpeedway Lausitz to joining the field at Catalunya, they’ve worked hard on perfecting their bike setting. Tom Sykes and Eugene Laverty will now do battle to try and secure a seat alongside Michael van der Mark for 2021; Sykes won his 2013 Championship at Jerez in the same race Laverty won before taking his only win at the circuit in 2015, so it should be a closely-fought battle between the BMW stars.

Leading the Independent battle, Loris Baz (Ten Kate Racing Yamaha), was race leader in Australia. Baz will be keen to break into the top six and continue his fight with the factory bikes at a track he made his Ten Kate debut on last year, giving him ninth in Race 2. Behind Baz is Maximilian Scheib (ORELAC Racing VerdNatura) in tenth overall, after a stunning Race 2 saw the Chilean finished seventh. Scheib has one STK1000 victory to his name at Jerez and is one to watch. Sandro Cortese (OUTDO Kawasaki TPR) took a career-best result at Jerez last year with sixth, whilst Michael Ruben Rinaldi (Team GOELEVEN) enters the round after a strong Misano test, where he was under the lap record. GRT Yamaha WorldSBK Junior Team’s Garrett Gerloff gets a first racing taste of Jerez, whilst teammate Federico Caricasulo knows the circuit well after WorldSSP wins there in 2017 and 2019. Spanish ace Xavi Fores (Kawasaki Puccetti Racing) has done limited testing but will be keen to get back to Jerez, a track he has a best result of seventh.

In other news ahead of racing, Takumi Takahashi (MIE Racing Althea Honda Team) will have a teammate in Italian Lorenzo Gabellini. Marco Melandri (Barni Racing Team) replaces the injured Leon Camier for the remainder of 2020, at a track he scored his last podium. For Leandro Mercado (Motocorsa Racing) and Sylvain Barrier (Brixx Performance), it’ll be their first round of the season.

Championship Standings after Race 2, Round 1

Back on track: WorldSSP battles to resume at Jerez

On-track action resumes in WorldSSP as the 2020 season restarts in the scorching heat of Jerez.

After an enforced hiatus after the season-opening Yamaha Finance Australian Round, FIM Supersport World Championship return to track action at the Circuito de Jerez – Angel Nieto for the Pirelli Spanish Round. It marks the start of the WorldSSP Challenge as well as the introduction of a second race for WorldSSP competitors.

The introduction of the two-race format will provide extra challenges for both teams and riders with the first WorldSSP race scheduled to take place on Saturday afternoons, just a few hours after Superpole. The extra race means more points available in a Round with full points to be awarded in both races. 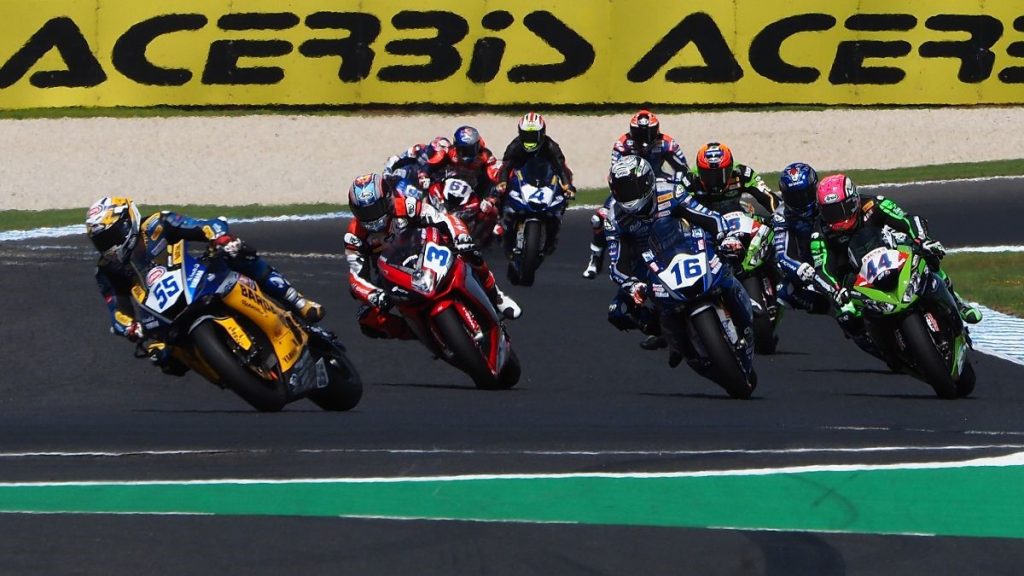 Andrea Locatelli (BARDAHL Evan Bros. WorldSSP Team) leads the Championship after taking a dominant victory at Phillip Island Grand Prix Circuit; and recently competed in the Italian Supersport championship as a wildcard at Mugello where he claimed two victories. The former Moto2™ rider also set blistering WorldSSP pace in a recent test at Mugello as he looks to continue his sensational start to the season.

Raffaele de Rosa (MV Agusta Reparto Corse) will be looking to go one better than he did at Phillip Island as he looks for victory in Spain to cement his place as a Championship contender; showing impressive race pace Down Under to claim a second place after starting the race in fifth.

De Rosa held off a challenge from Jules Cluzel (GMT94 Yamaha) in Australia, with the Frenchman hoping he can challenge at the front as the season resumes. Cluzel did some training at Carole Circuit in France, including breaking the one-minute barrier to take the lap record; a confidence booster heading into the restart of the season. Cluzel claimed a podium in the 2019 Round at Jerez; form he will be hoping to replicate as the season resumes.

Cluzel’s GMT94 teammate, Corentin Perolari, was just short of a podium in Australia but comes into the Spanish Round fourth in the Championship. Perolari is in his third year of WorldSSP action and has taken one pole position in his career so far but is yet to step on the podium. The French rider claimed his equal best finish at Phillip Island with fourth and will be looking to continue that form into Jerez.

2017 Champion Lucas Mahias (Kawasaki Puccetti Racing) is currently sitting in fifth in the standings following his fifth place finish Down Under. Fifth matches Mahias’ best result at Jerez in his WorldSSP career although he did pick up a podium when competing in European Superstock 1000. Mahias competed in an Italian Supersport race at Misano recently, claiming two victories in the two races alongside teammate Philipp Oettl, who finished sixth and fifth in the two races respectively.

Estonian rider Hannes Soomer (Kallio Racing) currently sits in sixth place following the season-opening round in Australia. Soomer, now in his sixth season on WorldSSP, started off the season with a strong performance and his best ever result at Phillip Island; having retired from his previous two races Down Under. Soomer’s Kallio Racing teammate, Isaac Viñales will be competing in his home race at the Spanish Round; looking to move up the field from his 10th place finish in Australia. Viñales finished eighth in the 2019 Round at Jerez, and also finished fifth in 2014 while competing in Moto2™.

South African rookie Steven Odendaal (EAB Ten Kate Racing) had a strong WorldSSP debut race in Australia as he finished in seventh place at a tricky circuit. Odendaal has competed at Jerez before he joined WorldSSP where he claimed a pole position and a second place in his 2016 Championship-winning CEV Moto2™ campaign. He raced at Jerez as recently as 29 in Moto2™, finishing 18th after making up six places during the race.

Like Odendaal, 2019 FIM Supersport 300 World Championship winner Manuel Gonzalez (Kawasaki ParkinGO Team) had a strong WorldSSP debut as he finished in eighth place, finishing just behind Odendaal after the 16-lap race. Gonzalez was just one second ahead of Federico Fuligni (MV Agusta Reparto Corse) who secured his best-ever finish at Phillip Island with ninth place.

The Pirelli Spanish Round means the start of the rebranded WorldSSP Challenge with entries from Xavier Navand (Altogoo Racing Team), Luigi Montella (DK MOTORSPORT), Alejandro Ruiz Carranza (EMPERADOR Racing Team) and Axel Bassani (Soradis Yamaha Motoxracing). In other news from the gap between the races, 2019 Champion Randy Krummenacher has announced he will not race with MV Agusta Reparto Corse in the 2020 season.