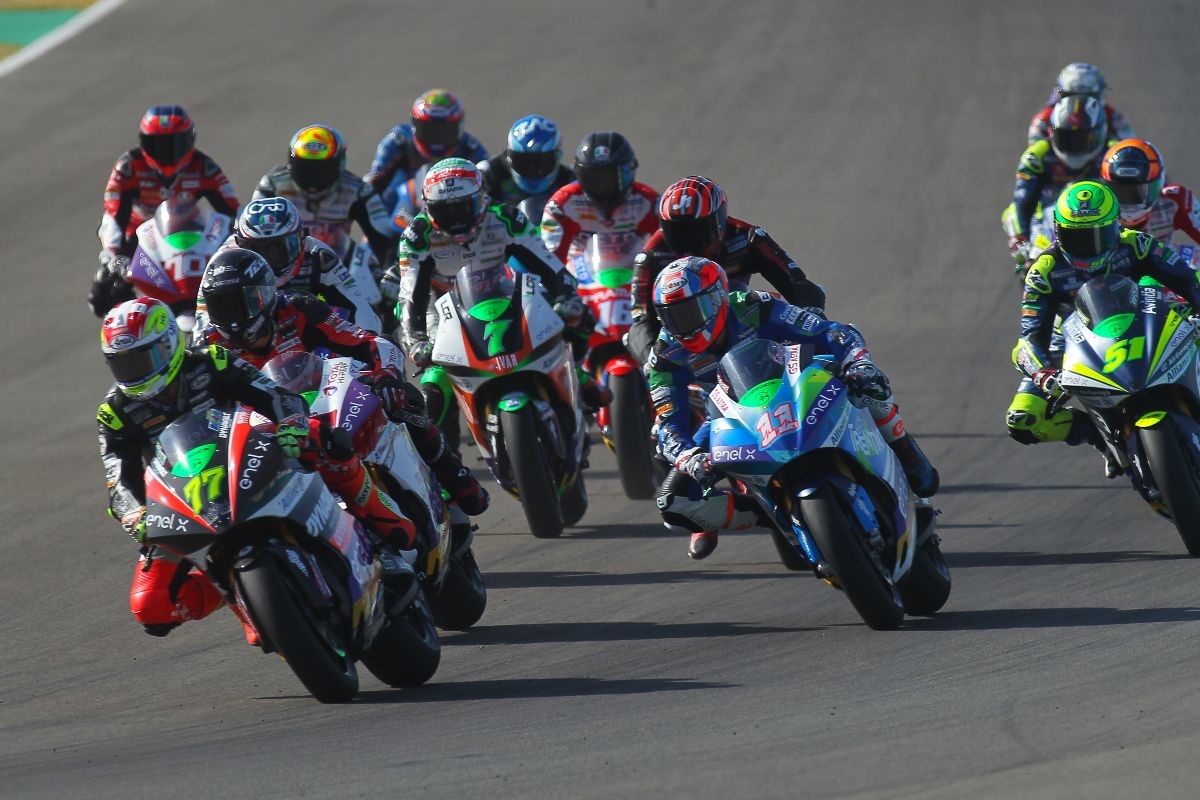 Dominique Aegerter (Dynavolt Intact GP) picked up his first FIM Enel MotoE™ World Cup victory after a dramatic race at the Gran Premio Red Bull de Andalucia, escaping the chaos to unleash some serious pace at the front as reigning Cup holder Matteo Ferrari (Trentino Gresini MotoE) collided with Spanish GP winner Eric Granado (Avintia Esponsorama Racing) with two laps to go. Jordi Torres (Pons Racing 40) made it a rookie 1-2 as he came home second and avoided the clash, with Mattia Casadei (Ongetta SIC58 Squadra Corse) completing the podium and back on the box for the first time since Misano last year.

It was a frantic start for the MotoE™ riders as the opening lap saw plenty of swapping and changing. Aegerter got the holeshot from pole position but Ferrari dived under the inside at Turn 5, although it wouldn’t last long as the Italian ran wide and Aegerter was back in the lead. The scrap for first was hotly contested, with home hero Alejandro Medina (Openbank Aspar Team) the next rider making their way to the front from P6 on the grid.

After running deep Turn 6 – taking Lukas Tulovic (Tech3 E-Racing) wide with him – Granado had work to do if he was to pick up his second victory in seven days. Aegerter had slipped to third behind Ferrari and Medina, but the Swiss rider got back up to P2, before Medina crashed out at the beginning of Lap 4 – handing P3 to Granado. The Brazilian then made a slick move underneath Casadei for second, setting the fastest lap along the way to sit a second behind race leader Aegerter with two laps to go…

Huge drama was about to unfold at Turn 6, however. Down the back straight, Ferrari was late on the brakes, but it really was too late as the inaugural MotoE™ Cup winner couldn’t get his Energica Ego Corsa stopped at all. Granado was in the wrong place at the wrong time as Ferrari careened through and clipped him, both hitting the deck. That left Aegerter with a comfortable cushion over second, and the Swiss rider made no mistakes on his final lap to win his first MotoE™ race by an impressive 2.6 seconds. Torres kept hold of P2, with Casadei managing to recover from running wide after Ferrari and Granado’s crash and the Italian picking up his second MotoE™ podium.

At the end of a breathless race, Aegerter leads the overall standings by 11 points from Torres, with Granado third – 13 adrift of the top. The MotoE™ riders will be back in business in Misano, as more twists in the 2020 MotoE™ World Cup storyline await.

Dominique Aegerter: “I’m very happy about taking my first MotoE victory, we were working very hard all week, we tried to take the data from last weekend and check the small details because it’s very important to try to improve and we were able to improve in every session. The conditions were the same as last weekend so it was good to compare some different settings, The team worked very well in the hot conditions in the tent, thanks to them. The race was quite hard, it’s just six laps but we were battling hard in the first two laps and I knew that I had to stay in front. I knew that I had the pace to go away a little, and I could do it and take my first win. Thank you very much for everything, and I hope the fans at home enjoyed the race!”