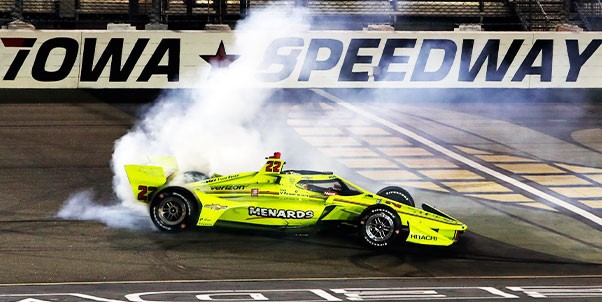 Pagenaud held off Scott Dixon by .4954 of a second for his first win of the NTT INDYCAR SERIES season in the No. 22 Menards Team Penske Chevrolet. Pagenaud started last in the 23-car field after a fuel pressure problem prevented him from making a qualifying attempt earlier in the day.

It’s the first time a driver has won from the last starting spot on the grid since March 2017, when Sebastien Bourdais drove from the rear to the front of a 21-car field to win the Firestone Grand Prix of St. Petersburg.

“This place is tough,” Pagenaud said after his 15th career win and his first at the 7/8th-mile oval. “What a night. What a day for us. First of all, amazing group effort from the whole Team Penske to recover from Road America. We unloaded really well. This morning was a lot of fun. Qualifying was disheartening, but these guys never give up. That’s what this team is all about.

“I can’t believe it. I have to rewatch the race. How did I get there? I don’t know. But the last 50 laps were certainly a lot of tension. When (Scott) Dixon is chasing you, you better hit your marks.”

“I wish you could see my smile right now,” Askew said. “This Arrow McLaren SP Chevrolet came alive once the track started to get cooler. We were really good on new tires and when they were very used. If that yellow didn’t come out on the restart there (on Lap 156), I think we would have had a really good shot at finishing at least 1-2 with Pato (O’Ward) and I. We’ll go get them tomorrow, but I’ll sleep really well tonight. Honestly, that’s probably one of the funnest races I’ve ever done in my life.”

2016 series champion Pagenaud wasted no time making his march through the field. Within the first 10 laps, Pagenaud already had made his way into the top 15. The long green flag runs throughout the 250-lap race opened the field for strategy that helped Pagenaud and other drivers gain ground from the rear.

A caution period on Lap 144 allowed leader Pagenaud to pit for the final time and get fresh tires for the run to the finish. He retook the lead from O’Ward on Lap 178 with his fresher Firestone tires.

As the end of the race neared, Pagenaud’s rear-view mirror was filled with Dixon’s orange-and-blue Honda. But the Frenchman held off the late charge from the Kiwi and led a race-high 83 laps on the night, including the final 72. He averaged 132.220 mph.

Askew, who was charging hard on the freshest tires among the leaders, finished 7.2128 seconds back.

Pagenaud will look to sweep the weekend in Iowa tomorrow night with the Iowa INDYCAR 250s Race Two (8:30 p.m. ET, NBCSN) from Iowa Speedway. Qualifying for tomorrow’s event was also held Friday, and Newgarden will lead the field to green, and he will be joined on the front row by his Team Penske teammate Power.