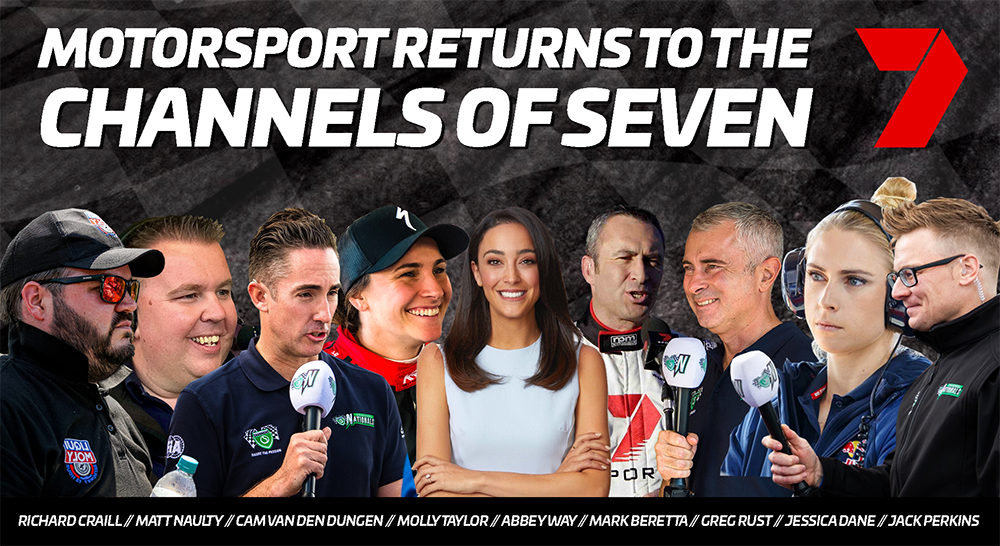 Triple Eight – Red Bull Holden Racing Team part owner Jessica Dane has been named as one of the members of the nine on-air commentator line up for the Seven Network’s Australian Racing Group telecasts in 2020.

The Seven Network and the Australian Racing Group have confirmed an all-star on air line-up for the return of top-line motorsport to its screens in 2020.

A dynamic and diverse list of nine commentators, pit reporters and presenters will bring ARG’s racing categories to life, with a minimum of three hours per day of free-to-air broadcasting, on top of the all day live streaming on 7 plus.

Hosting the coverage will be Seven’s lead sports broadcaster Mark Beretta. It will be a return to Australian motorsport circuits for Beretta, who was part of the Supercars coverage with Seven from 2007 to 2014.

Joining Beretta in a host role will be rising media talent Abbey Way. The 29 year old hosts AFL and cricket for Seven, as well as its popular reality program House Rules. This year, she will add motorsport to her impressive resume.

Calling the shots for the classes such as TCR Australia, S5000, Touring Car Masters, Trans Am and more will be a wealth of professional talent, including Greg Rust, Matt Naulty, Richard Craill and Cameron van den Dungen.

And the three people working the pit lane will certainly know their way around the garages. Jack Perkins (Supercars endurance driver), Molly Taylor (2016 Australian Rally champion and TCR driver) and Jessica Dane (part-owner of Triple Eight Race Engineering) will give television viewers the inside line from pit road.

Every moment of Saturday and Sunday track action, from 9am-5pm, will be broadcast on Seven’s digital offering 7plus.

In addition to the live stream, 7mate will feature a minimum of three hours per day of free-to-air coverage.

Racing categories that will feature on the channels of Seven include TCR Australia, S5000, Touring Car Masters, Trans Am and more, plus the brand-new Bathurst International event in November.

The opening event is slated for September 4-6 at Sydney Motorsport Park.

“It is a pleasure to announce our commentary team in conjunction with the Seven Network as we prepare to start racing,” said Braid.

“We have Australia’s best mix of exciting motorsport categories, and now an equally exciting commentary team that includes a group of Australia’s most respected and experienced commentators and presenters, together with some great new talent, who collectively will provide exceptional coverage of ARG’s race categories and events on Australia’s leading television network.”

“Motorsport has long been a core part of Seven’s DNA so we’re rapt to partner with the Australian Racing Group to bring fans a feast of top-line racing LIVE and FREE in 2020,” said Martin.

“With a minimum three hours’ coverage on Seven on each day of competition and every second of every day live-streamed on 7plus, racing fans are in for a high-octane mix of TCR, S5000, Touring Car Masters, Trans Am and much more. We can’t wait for the free flag to get things started.”

“It’s fantastic to have regular motorsport back on Seven,” said Beretta.

“TCR is booming around the world because of its accessibility, brand rivalry and tight racing, so I know this season is going to grab the attention of Australian sports fans and take them on a brilliant ride!

“To launch a new racing family on Seven is super exciting. Our team of commentators are fresh, knowledgeable, passionate and keen to bring the action to viewers in a way they’ve never experienced before. This is racing with real energy from the team calling the action because they love everything about TCR.

“We’ve got a mix of legends and young guns racing in cars designed to create a even contest, so the recipe for full-on racing action is spot on! I honestly can’t wait to get this party started!”

“I could not be more excited to be part of this incredible team,” said Way.

“Motorsport is a new challenge for me and one I already know is going to be a hell of a lot of fun with the group we have together. It’s fresh, exciting and going to be the ultimate entertainment. The count down is well and truly on for Sydney!“

“I’m so excited because, on a personal level, it means I’ll have a box seat!” said Rust.

“I’ve been fortunate to be part of the motor racing coverage on many Aussie TV networks over the years but not the country’s best. Channel 7 has a deep and proper connection with motor sport and this latest chapter looks like being a special one. The team they’ve assembled is one I’m enormously proud to be part of. It will ensure the fans get fabulous coverage of the contest while showcasing the characters of the game. That’s a real point of difference and something I’m particularly passionate about.”

“In terms of the TCR Australia Series, 2019 was a standout for me. In over 20 years covering the sport, I really loved the freshness of working on TCR. It’s one of the most energised paddocks I’ve ever been in and the racing really delivered. Plus we had a mix of emerging stars competing and some legends not to mention the variety of makes on the grid.

“This year it will go to another level with some trick broadcast innovations too. I can’t wait to get going.”

“I’m really looking forward to being part of this great team calling the TCR and S5000 series in 2020 after helping at selected rounds in 2019,” said Naulty.

“I think everyone is just excited to get back to a track after being away for so long, so there will be plenty of energy and hopefully that reflects in the coverage.

“The quality of the drivers, cars and teams in TCR for 2020 is second to none and it has the perfect mix of experience, youth and the weekend racer all combined into one. Im keen to see them at Bathurst as I think they will look great going across the Mountain on the first lap”

“S5000 will really make an impact if the two events late in 2019 were any form guide! The noise is the biggest attraction along with the fact that the cars look cool and they are super fast, so Im really looking forward to seeing them around tracks like SMP or Symmons Plains  for the cornering and places like Winton where patience is a big factor, its going to be great”

“Last year gave us a tease of the potential that exists in S5000, and the pause in life we’ve all experienced in 2020 has just added to the anticipation,” said Craill.

“This is going to be an exciting new chapter in the sport, with lots of exciting stories – stories that motorsport fans may not know but we know they will find absolutely compelling – and great racing to come.”

“Some of the greatest heroes in our sport have come out of big, loud, fast and exciting open-wheelers in this part of the world. The VHT S5000 Australian Drivers Championship, with its totally unique mixture of old-school V8’s and the latest safety and sporting ideas, means we can create some more for a new generation of fans … and also tell the nearly 60-year story of the Australian Drivers Championship and the Gold Star award along the way.”

“It’s been a year that we’ll never forget, and we haven’t even started racing yet,” said van den Dungen.

“I like to think of it as the longer the wait the sweeter the taste of the incredible categories that are part of the Shannons Motorsport Australia Championships.

“Amongst the incredible category line-up on offer this year, I’m extremely excited to see the National Trans Am Series get stuck into the action-packed racing that these modern V8-powered, rear-wheel drive muscle cars always provide. The calibre of drivers and their mouth-watering machines will be a must-see for any motorsport fan!”

“Having been involved in the inaugural season of TCR and the first race of S5000 last year, the natural progression into the second year is going to be great. ARG have secured more racing categories as well, with Trans Am and TCM, so the undercard is as good as the main event,” said Perkins.

“After everything we’ve gone through in 2020, it’s great that we’re finally going racing again and to have Motorsport back on Channel 7, with a new team, new people – its great to be a part of it!”

“Touring Car Masters is a real crowd favourite. The old cars and in some cases old drivers attract a lot of attention! These cars have lots of power, vary in shapes and sizes and the racing is always very exciting through the field”

“Like everyone, I cannot wait to get back to the track,” said Dane.

“It’s been a rollercoaster year so far, but this is definitely something to look forward to – the racing should be fantastic with everyone so keen to get back behind the wheel and the coverage will give fans at home plenty to tune in for.”

“Honestly, I thought my broadcasting days were long behind me in the UK, but I’ll never turn down an opportunity to go racing, so I’m massively excited to be joining such a great team who will be aiming to deliver the best possible television for the fans.”

“There’s always a lot of anticipation over the off-season and this extended break has certainly built our excitement to get back out there,” said Taylor.

“I think the atmosphere is going to be incredible and I can’t wait to be a part of it.

“It’s going to be a strange feeling flipping positions and being on the other side of the microphone. I’m sure it’s going to be a steep learning curve, but I’m really excited to be part of the action from a different perspective.”