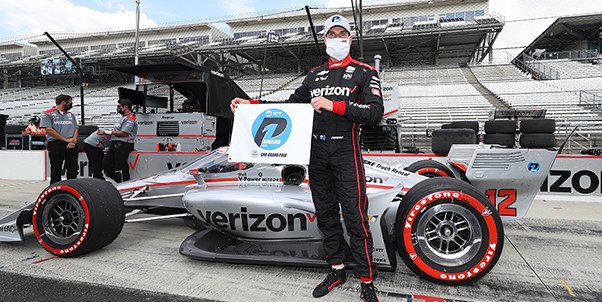 Whether considering raw speed or history, it will take quite an effort to beat Will Power on Saturday in the GMR Grand Prix at the Indianapolis Motor Speedway.

Power earned the NTT P1 Award for winning the pole for the second NTT INDYCAR SERIES race of the 2020 season, setting the pace at 1 minute, 10.1779 seconds, 125.116 mph in the No. 12 Verizon Team Penske Chevrolet on his final lap in the Firestone Fast Six. Qualifying took place in steamy conditions, with air temperatures in the low 90s on the 14-turn, 2.439-mile road course.

2014 NTT INDYCAR SERIES champion Power drove to his 58th career pole, second best all time and just nine behind Mario Andretti’s record of 67. He also led the one practice session earlier in the day at 1:09.9487.

“We left nothing on the table in that lap in the Verizon Chevrolet,” Power said of qualifying. “I knew that (Jack) Harvey had a pretty good time up there, so we put our best set on for the last run, and I just gave it my all. Fortunately, it was enough.”

Not only does Power have pace on his side for the 80-lap race that starts at noon (ET, live on NBC) Saturday, he also has history for support. This was his fourth career pole in seven starts in this event, and he has won all three previous years he started from the pole, in 2015, 2017 and 2018.

Power’s scintillating, last-gasp pole dash was enough to knock a superb lap from Jack Harvey from the top of the charts. Harvey, who finished third in this event last year, ended up qualifying second at 1:10.3653 in the No. 60 AutoNation/Sirius XM Honda.

Oliver Askew was the top-qualifying rookie, fifth at 1:10.8404 in the No. 7 Arrow McLaren SP Chevrolet. Reigning series champion Josef Newgarden rounded out the Firestone Fast Six, not posting a lap time after going off course in Turn 12 during his flying lap in the No. 1 XPEL Team Penske Chevrolet.

Five-time series champion Scott Dixon will start seventh in the No. 9 PNC Bank Honda after just missing a berth in the Firestone Fast Six by 57-thousandths of a second.

Three-time and reigning GMR Grand Prix winner Simon Pagenaud had a tough day, not making it out of the first round of qualifying in the No. 22 Menards Team Penske Chevrolet. He will start 20th in the 26-car field.

1st – WILL POWER (No. 12 Verizon Team Penske Chevrolet): “We left nothing on the table in that lap in the Verizon Chevrolet. I knew that (Jack) Harvey had a pretty good time up there, so we put our best set on for the last run, and I just gave it my all. Fortunately, it was enough. But man, the heat. I just want to jump into an ice bath right now, I’m so bloody hot! We don’t need to be trying to get out first. If you’re thinking of that, you’re going to make a mistake, or I don’t need to be thinking about winning. You just need to be thinking about what you’re really good at, which is for me, driving; and for the crew the stops that they’ve done thousands of. We’ve all had a chat, and we all understand that. That’s how we’re going to win a championship.”

3rd –COLTON HERTA (No. 88 Gleaners Food Bank of Indiana Honda): “We made a really good leap from practice; we weren’t super special but all right, just outside of the top 10. We made some good changes to the Gleaners Food Bank Honda. I love qualifying around here and I love being in Indy, so its super special to be on the second row of the grid for the second year in a row. I’m hoping we get a good result out of it.”

4th – GRAHAM RAHAL (No. 15 Fifth Third Bank Honda): “It was a good end to our first day here at the GMR Grand Prix with qualifying. We’ll start fourth, so it’s a really good run for us in the Fifth Third Bank team. The guys did a great job. We had a really good lap in Round 2 to get us into Round 3 and then in Q3 we had one going that was just a hair better, but it still ended up being our best lap. All in all, I’m happy with P4. We can go race from there; we can do a good job from there. Honda has done an amazing job; you could see it. The other guys (Takuma and Spencer) didn’t have the luck we did today in getting through, but they will have a good day tomorrow. We’re pretty pleased with today.”

5th – OLIVER ASKEW (No. 7 Arrow McLaren SP Chevrolet): “Today was more than we could have asked for, honestly. The goal was to move on from Round One of qualifying, but once I felt the car was capable of competing in the Firestone Fast Six, it was game on. The guys at Arrow McLaren SP did a really good job of making the right changes between practice and qualifying. It comes down to that and being able to put down your theoretical best lap together by not making mistakes. Everyone sees how close it is out there in lap times. I felt really good out there, and these are the days I love about racing, when you feel connected with the car and you don’t have to think about it. It just all comes together naturally. Really happy with today.”

6th – JOSEF NEWGARDEN (No. 1 XPEL Team Penske Chevrolet): “We couldn’t really get going there on that lap. I came out of the pits and had a huge lockup to start the lap on the first corner. I’m not sure. It snuck up on me and hasn’t done that all day. I’m sure I have an influence on why that happened, but not 100 percent positive why we got such an aggressive lock-up. We had one lap on the tires ready to go just like Will (Power). I thought we were getting better all session but were a little bit behind him all day. We definitely need to work on our pace, and I felt like we were getting there. You come to this track, and you don’t see the separation of people on track. Everyone is just kind of the same speed. There’s definitely people that shine. Obviously Will and Simon (Pagenaud) have been very good here, but it doesn’t separate people out, so you’re all clumped together. Team Chevy has worked with us all session, and we were pulling forward; they were giving us a little more each time. I think we can still have a good show with XPEL tomorrow and go for a win.”

7th –SCOTT DIXON (No. 9 PNC Bank Chip Ganassi Racing Honda): “We went through a bit of an aero experiment. We tried some different things up and down on downforce between the black and red tire runs. I don’t think we nailed it maybe as best as we could have, but on the red tires we were pretty good. We were definitely pretty close, though, with the PNC Bank car, and maybe some of the guys we didn’t think would have been up there ended up being up there to challenge. It will make for an interesting race tomorrow, for sure.”

8th– CONOR DALY (No. 20 U.S. Air Force Chevrolet): “We felt like we had a lot of grip on the red tires. For some reason, there’s a big difference in tires for us. On the blacks, the car just doesn’t quite come in the way I like it. As soon as we put on reds, I can really get on it, even on Lap 1. We have to try and bring those balances a little closer together for tomorrow, but I’m super pumped. We’ve got the U.S. Air Force Chevrolet, all of us here together for the first time at Ed Carpenter Racing, this is a great start. We’re right in the fight, starting eighth. That’s all we want – a chance to be up there and get good points at the end of the day.”

9th – FELIX ROSENQVIST (No. 10 NTT DATA Chip Ganassi Racing Honda): “P9 is not terrible, but not great, obviously, and not where we were looking to be. I thought the car felt good, but it wasn’t so quick, which is always a bit perplexing. So, we will have to go back and just look where we lost time. I felt like I should’ve put a good lap there in the end, and that was only good for P9. It’s a long race tomorrow, so we have any chance to have a good result in the NTT DATA Honda.”

10th– MAX CHILTON (No. 59 Gallagher Carlin Chevrolet): “All in all, I’d say it was a pretty decent day for us. We were up front quite a bit in practice this morning, and then we dropped down and ended up 18th toward the end of the session, but I knew we were quicker than that for qualifying. Surprisingly I came in from my final run in the first round of qualifying and was having a hard time finding myself on the time sheets and then realized I was up in P2 and moving onto the second round with the rest of the top 12. We went out in the second round and the No. 59 Gallagher Carlin Chevrolet was really good, but I didn’t really drive to the grip levels because I was worried about the temperature. I went out and did what I’d done before but tidied it up on the first lap on reds. Then on the second lap, I went out thinking there was no way I was going to go any quicker, so let’s just over-drive it and see what we can do and ended up actually going quicker. Unfortunately, I think it just proved that I didn’t get the most out of the first lap, but that does prove that Gallagher Chevrolet is quicker than where we are, so hopefully we’ll have a good day tomorrow and move quickly through the field to the front.”