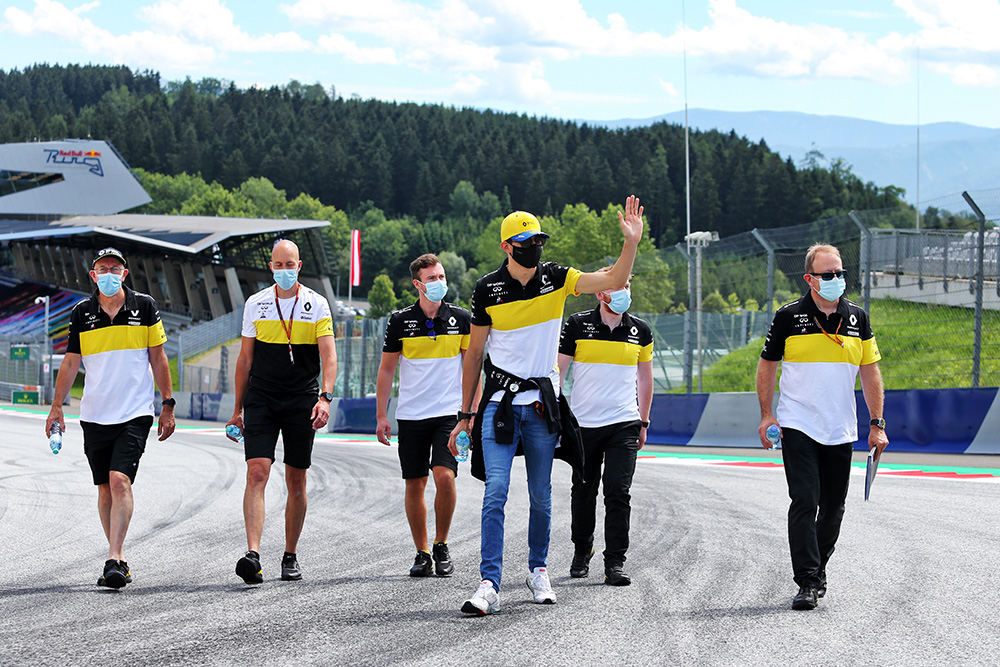 Renault DP World F1 Team is in Spielberg for the first race of the 2020 FIA Formula 1 World Championship, the Austrian Grand Prix.

Red Bull Ring facts
• Austria becomes the 11th country ever to host a season opener in Formula 1.
• The Red Bull Ring has the quickest overall lap time on the calendar, though it’s only the fourth shortest track.
• With three victories in the mid-1980s, Alain Prost is the most successful driver in the Austrian Grand Prix.
• Renault has powered four wins in Austria: Jean Pierre Jabouille won in 1980, Alain Prost in 1983, Jacques Villeneuve (Williams-Renault) in 1997 and 2018 with Max Verstappen (Red Bull Racing).

Young Drivers
• The Renault Sport Academy will field four of its drivers in Austria this weekend. FIA Formula 2 duo Guanyu Zhou and Christian Lundgaard are back in action for UNI-Virtuosi and ART respectively.
• Max Fewtrell and Oscar Piastri will also be in Austria as the FIA Formula 3 Championship begins.
• Oscar will make his on-track debut in Academy colours as well as his first appearance in Formula 3 with reigning champions Prema Racing.

Making safety a priority
Racing will resume in a very different format in Austria. To illustrate the differences Renault DP World F1 Team has put together B roll videos demonstrating the safety measures behind the scenes at Enstone and trackside in Austria.

Factory safety
Returning to work safely after a lengthy shutdown period due to the global Covid-19 pandemic has been paramount. Operations Director Rob White takes us through how the team has adapted to enable staff to work in a safe environment.

Rob White, Renault DP World F1 Team Operations Director (Enstone):
“As soon as we knew the final shutdown period we shaped the measures required to bring the factory ‘back to life.’ We understood we had to make widespread changes. We had to reduce the occupancy so a large amount of the workforce now works mainly or partially from home. Getting people to work from home efficiently was a massive piece of planning undertaken by IT. They moved us from a fairly conventional organisation with a pretty low rate of home working to a majority. Where it isn’t possible to work remotely, we have reduced the occupancy by introducing a cohort system and splitting people into groups and sub-groups.

“There have also been physical changes on site to achieve distancing. Where people are working full time we have reorganised the work place. We have declared red zones where face masks are compulsory, we’ve introduced one-way systems and placed a lot of signages to be as clear as possible. We’ve facilitated the way everyone is working to minimise contact. Other measures include a new policy for visitors, and staff health self-assessments.

“The Viry site reopened a couple of weeks before Enstone, which was a source of information and inspiration. The practical measures are very similar. Our protocols are clear and we believe we can work very effectively.”

Alan Permane, Renault DP World F1 Team Sporting Director:
“There have been a lot of exchanges with F1 and the FIA over the past two months about how to return to racing safely. All travelling staff have been Covid-19 tested and there are many codes of conduct in place to enable us to race safely. The biggest challenge was getting everyone here and working safely in the garage. We have issued staff with guidelines, protective equipment and will keep people isolated in various groups. We are optimistic about going racing and look forward to everything trackside. Getting back to the circuit with the sights, sounds and smells plus looking at the stopwatch again … having the build-up throughout the weekend until the race… there’s nothing quite like it.”