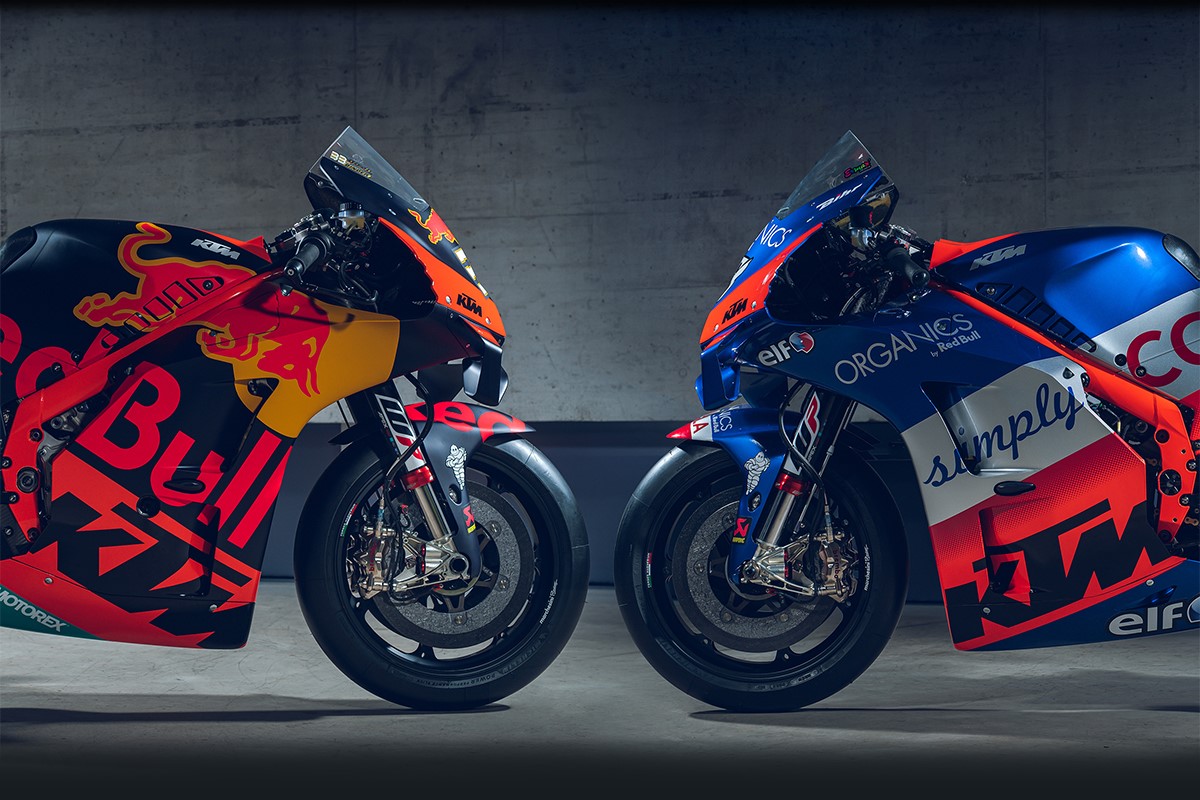 Next season’s line-ups for the Austrian manufacturer have been announced as Ducati’s Danilo Petrucci joins the ranks.

KTM have announced they will rely on the skills of Brad Binder and Miguel Oliveira to represent Red Bull KTM Factory Racing in 2021. The South African and Portuguese, former Moto3™ and Moto2™ teammates, will reunite in the premier class. Meanwhile KTM will extend their purposeful attack on MotoGP by welcoming and harnessing the experience and GP-winning speed of Danilo Petrucci who will partner Iker Lecuona at Red Bull KTM Tech3 for the 2021 campaign. All four racers will steer works KTM RC16s.

Miguel Oliveira moves into the factory set-up alongside Binder for what will be his third term in MotoGP™ and his sixth in total with KTM. The 25-year-old will have completed two campaigns as part of Red Bull KTM Tech3 even if 2019 was curtailed with a blameless shoulder problem and 2020 has so far been blighted by repercussions of the COVID-19 virus. Oliveira impressed with nine points-scoring results and a strong top eight classification at the Grand Prix of Austria in his rookie season during 2019.

inder, 24, has yet to make his MotoGP™ debut in 2020 but inked a new contract to remain in Red Bull KTM Factory Racing colors for 2021. The South African has been part of the Red Bull KTM family since 2015 and became the company’s third Moto3 World Champion in 2016; lodging all of his 15 GP victories ‘in orange’.

Both riders have won Moto3™ and Moto2™ Grands Prix for KTM and have come through a structure that the company have labelled the ‘KTM GP Academy’; a system of talent recognition and support that stretches from the Red Bull MotoGP Rookies Cup through the FIM World Championship categories.

Binder and Oliveira are familiar with each other’s characters and working methods having previously been teammates in the Red Bull KTM Ajo squad in Moto3™ in 2015 and then Moto2™ in 2017 and 2018. They have appeared on a Grand Prix podium together six times: notably three in a row towards the end of the 2017 Moto2™ Championship.

Red Bull KTM Tech3 will count on the knowledge and wisdom of nine seasons of MotoGP™ experience accumulated by current Ducati Team rider Danilo Petrucci for 2021. The 29-year-old will be only the second Italian to represent the French crew in MotoGP™ this century. He has gathered nine podium finishes so far in the class and has steered three different bikes since entering Grand Prix in 2012. Petrucci’s determination, coupled with his grounded character and work ethic, will make an apt foil for teammate Iker Lecuona. The 20-year-old Spaniard is waiting to begin his first term in MotoGP™ in 2020 and recently re-signed to race again for Red Bull KTM Tech3 in 2021.

KTM would like to convey thanks to Pol Espargaro. 2020 will be the fourth year together in a collaboration that has delivered several milestone achievements and both parties want to pursue different paths in MotoGP from 2021 onwards.

The 2020 FIM MotoGP World Championship will finally get underway with a double-header event – the Grandes Premios Red Bull de España and Andalucía – at the Circuito de Jerez in southern Spain on July 19th and 26th.

Brad Binder: “I’m incredibly excited to be able to have another season on the Red Bull Factory Racing RC16 and I’m really looking forward to getting this year underway and my first MotoGP race under my belt. It’s an honor to have this opportunity and I’m looking at a bright future with KTM and some great times to come.”

Miguel Oliveira: “I’m really happy about this opportunity that KTM have given me for the next two years. I feel that they trust me to show my value as a rider in this project. Since day one I have given my best to the bike and believed in its potential to achieve good results and this is what we want to deliver in the near future. I think we are in the right place to do it, and for me to develop as a rider. It’s a great, great opportunity. We still have to focus on 2020 but I feel grateful for this great challenge. Thanks to the KTM family.”

Iker Lecuona: “I would like to truly thank Red Bull KTM Tech3 for the confidence they are placing in me for their 2021 project. I felt very good with the new RC16 from day one and the bike has really progressed from the configuration we used in the 2019 Valencia race. I think we can make some great races with this machine. Signing for 2021 gives me enough peace of mind to be able to fight for my goal of being Rookie of the Year. I feel like I’m in a great family here.”

Pit Beirer, KTM Motorsport Director: “It gives me great pleasure to stick these four hungry guys together for our MotoGP program. Brad and Miguel have a productive working relationship and have shown the talent and the desire to win races through all stages of Grand Prix. We believe they have the determination necessary to push our MotoGP project forward. The same goes for Red Bull KTM Tech3 where we’re happy to bring Danilo into the family. His experience counts for a lot but we’re also banking on a rider that is committed and with the right attitude. We believe he still has something to show in MotoGP. On one side we are investing in MotoGP front-runners ‘of the future’ but they could easily become stars already in 2021 and that would be exciting to see. We have two set-ups but really it is one big team with all four athletes on the same bikes and with the same possibilities. Our riders’ development and success will be a great KTM story and it will taste even sweeter to take these guys to new heights in such a tough competition.”

Mike Leitner, Red Bull KTM Race Manager: “We have two very talented riders in Red Bull KTM Factory Racing for 2021 and we’ve seen in both Moto2 and Moto3 what they are able to do. It’s great to be able to bring both of them through the ranks into MotoGP. Miguel has already made positive first steps in the category and performed so well at Red Bull Ring last year. He was unlucky with the crash at Silverstone because he suffered with his shoulder for the rest of the season. We expect him to have a good championship this year and be even more ready to change set-ups for 2021. For Brad we know his skills and potential as a rider. Of course, he is the rookie but we’ll bring him up to speed in 2020 and help him to learn the category to be stronger for 2021. Right now, we’re looking forward to racing in 2020 and have to thank everyone that managed to make a race calendar happen this summer. We are very confident with our current rider line-up: as we said, Brad will learn, and Pol has a great chance to get some decent results. We cannot wait.”

Herve Poncharal, Red Bull KTM Tech3 Team Principal: “Iker Lecuona, the youngest rider on the MotoGP grid at the moment, is going to be with us again in 2021. We are all very happy about that because it was a big move for him to jump on a MotoGP bike and, unfortunately, he hasn’t had a lot of chances yet to show what he can do. Then we will have the pleasure to welcome Mr. Danilo Petrucci with us from 2021. Danilo is a man I respect a lot. He is a ‘normal’ guy, who always say hello to everyone, who has a lot of charisma and a great sense of humor. On top of that – and maybe even more important – he is also a team player and a MotoGP winner. There are four factory Red Bull KTM riders on the grid with the same support, the same equipment and this shows us the support that KTM is giving to the team. I would like to thank Stefan Pierer, Hubert Trunkenpolz and Pit Beirer: these are exciting news and it is an exciting program. We want to do well in 2020 but we are also already impatient to start working with our 2021 crew.”