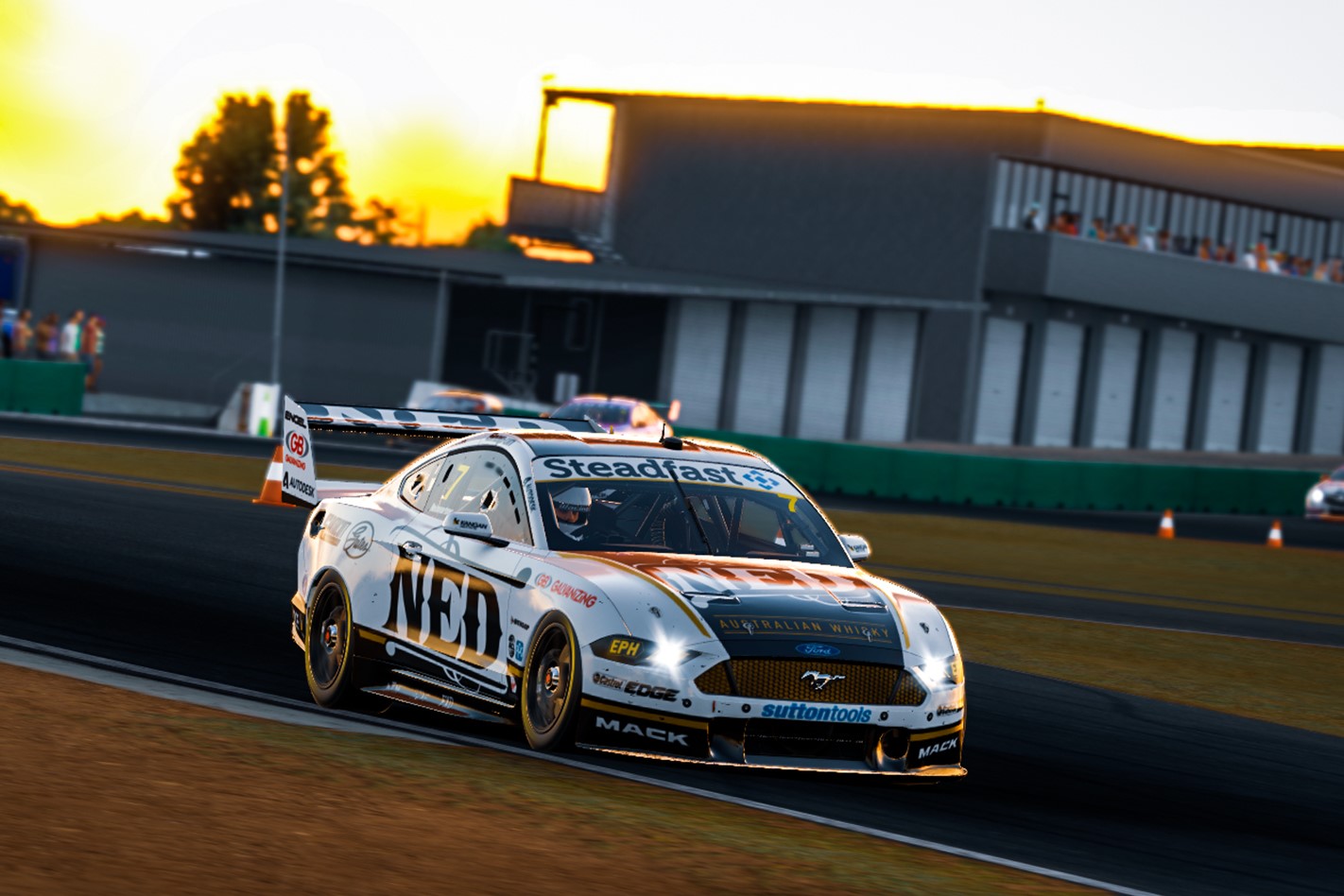 After ten-weeks of action-packed racing in the virtual world, the BP All Stars Eseries season came to an end last night. The final round was held at two iconic Australian circuits in Mount Panorama, Bathurst and Oran Park. While Oran Park no longer exists in the real world, it was once again buzzing with the sights and sounds of Supercars last night.

There were just two qualifying sessions and two races last night without a reverse grid race. The night kicked off with a 20-minute Bathurst qualifying session and the competition was strong from the outset. With the addition of seven highly competitive wildcard drivers this week, Rick Kelly and André Heimgartner had their work cut out to secure a grid box at the pointy end.

André could only claim P18 on the grid in his NED Racing Mustang, while Rick qualified even further back in P27.

When the green flag waved for Race One there was action from the outset with a multi-car accident at Turn One – luckily, Rick and André were able to get through without contact. By lap three André was closing in on the top-ten while Rick wasn’t too far behind.

During the first pit stops, André was able to make up more places and sneak into the top-ten, while Rick’s pit stop timing wasn’t as efficient and he re-joined behind a train of cars. At the end of the race André crossed the chequered flag in P11, while Rick finished P24.

The team then returned to Bathurst for Race Two and the final for the Eseries. There was action from the outset and André was able to capitalise and move up to P10. Rick meanwhile battled at the rear of the field and wasn’t able to have a clean race.

At the end of the final race, André finished P8 while Rick was P28. With some solid results this week, André was able to take out sixth place in the Eseries Championship after producing consistent top-ten finishes at most rounds.

The team would like to thank all of its fans and partners for their continued support during the Eseries. We now look forward to going racing in the real world on 27 June.

“It’s been a crazy ten weeks with the Eseries, it’s been a different experience but one that I’ve really enjoyed and had a lot of fun doing. It’s been cool getting into the whole simulator thing and trying out different equipment, and getting a bit nerdy and hands on with it which as a driver you don’t normally get to do with real-world racing”

“We ended up finishing sixth in the championship which I’m pretty happy with, coming into this I knew Shane and Anton would be pretty tough to beat but didn’t really know where everyone else would sit so happy with how it went, definitely everyone improved quite a lot over the ten weeks – even Rick!”

“It’s also just been good to keep a routine during this down time and have something to work towards each week which is great and kept the racing brain ticking over. Bring on the real stuff in a couple weeks.” 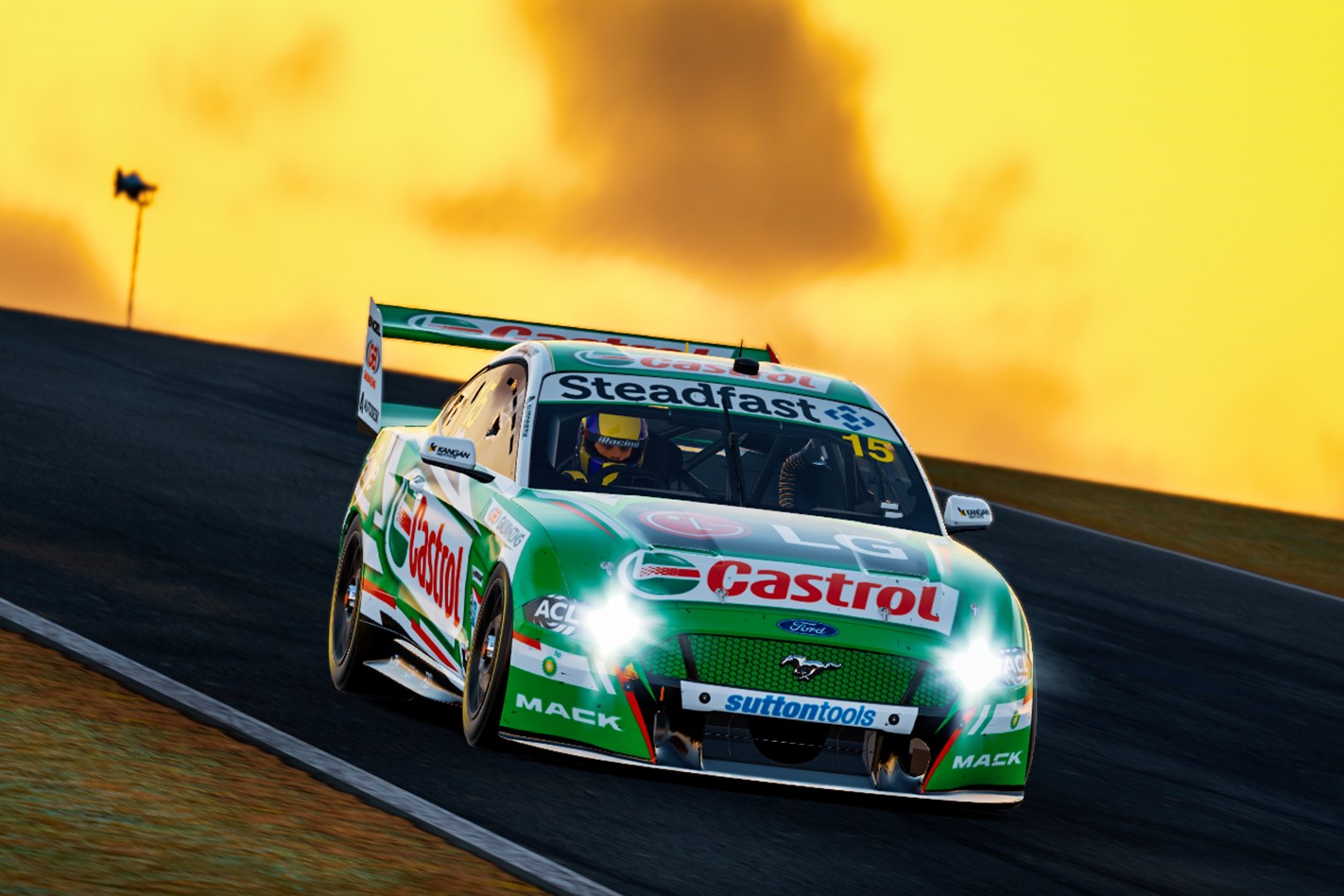 “Well the sim is up for sale now, but in all seriousness, I really didn’t know what to expect when we started the Eseries, whether anyone would watch it or enjoy it, but it’s been a big surprise and a big success. Supercars put on an incredible show and did such a good job to produce something of that quality in a short period of time and give the fans and sponsors something to engage with.”

“From the driving point of view, I wasn’t very good but definitely improved as the series went on, the second simulator was a big upgrade and building it with the help of my son was probably my highlight of the last ten weeks.”

“Now our full focus is on the return to racing in a few week’s time, I absolutely can’t wait to get back on the real race track at Sydney.”