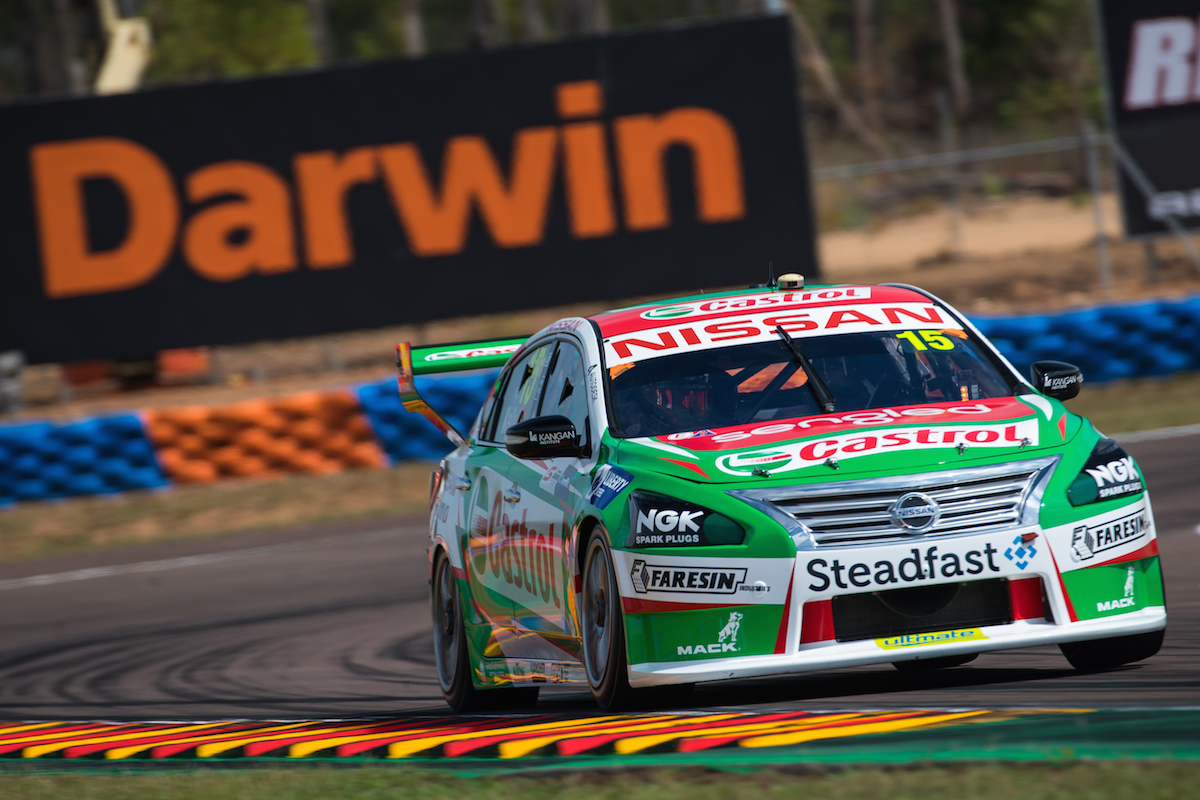 While much of the east coast of Australia shivered in cool conditions, the Virgin Australia Supercar Championship teams chose short sleeves and shorts as the temperature rose to the high 20’s with track temperature some 5 degrees warmer.

Rick Kelly brought his Winton form to the top end and took control of the first practice session, at one stage 3/10ths faster than his nearest rival as the Nissan team dialed a fast set up into the car early. “You’re not too worried about where you are at the end of Practice 1, because you don’t know what tyres everyone else is on,” Kelly said.“But the session itself for us was really strong. We tried a lot of stuff there and the car didn’t fall away, and we found a couple of things that we used towards the end to our advantage.“The tyres we ran had been to Perth and Winton. I was expecting a bit more of a gain than the time we found, so I’m keen to run on a green.”

Jamie Whincup was non-commital when asked if his second place in P1 was a sign that the Triple 8 team had made progress in their set-up and race speed. “Winton wasn’t too flash, so the car is very different,” Whincup said.“We’re not sure if it’s going to be quicker or not. The early signs say it is, but it’s a long grind all weekend.”

Michael Caruso made it 2 Nissans in the top 3, with David Reynolds moving forward in the middle part of the session. At one stage the Erebus driver held the fastest time, only to drop three places in the closing stage as drivers made one last run. Shane vanGisbergen, Scott McLaughlin, Craig Lowndes, Tim Slade, Will Davison and James Courtney rounded out the top 10.

Davison was impressive win his Milwaukee Racing entry to be the top Ford runner. His weekend was off to a poor start when he suffered a fractured ankle in a training mishap, only time will tell if the injury will impact upon his weekend. The Tickford Racing Fords ended the session back in the field with the 14th, 17th, 18th and 19th best times for Chaz Mostert, Richie Stanaway, Mark Winterbottom and Cameron Waters respectively.

A number of cars found the dirt at turn 1 as they explored braking and adhesion limits at the end of the main straight. It was also noticed that a number of the Commodores were experiencing front splitter flex towards the braking area, an issue which did not seem to concern BJR principal Brad Jones.“We’re not the only ones with a bit of flap going on at the end of the straight,” he said. “It’s got a pretty long beak on it, so really I think it’s all about how much front downforce you’re trying to generate.“It just gets to a point where it’s too much. You either tone it back a little bit or work out another way of generating front grip.”

Scott McLaughlin struck back to claim the top time in the second practice session after Rick Kelly looked set to take the Friday double in P1 and P2. Kelly put down the benchmark time in the early part of the session as the track temperature rose to over 40 degress celsius. Shane van Gisbergen was the first to get close to the Nissan before the session was stopped to clear a bolt that had found it’s way onto the circuit. Triple 8 took the opportunity to replace the front splitters on both Red Bull cars.

McLaughlin and Whincup edged closer to Kelly‘s time and fell within 0.13tenths of a second as the session moved into the final phase. Scott McLaughlin finally dislodged Kelly by just 4/100ths of a second with just under 2 minutes left ro run. “We were one of the only ones who got a green [tyre] gain from what we saw,” McLaughlin said.“So that was good, but we just didn’t get that last sector right with regards to pressures and a few things. “There’s a bit to work on, but we ended up P1, which is where we want to be.”