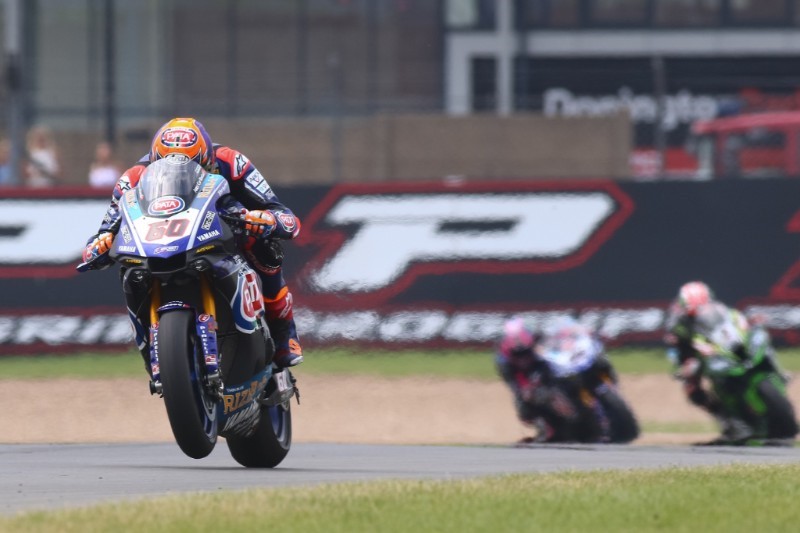 It’s like waiting for a bus…. two come along at once as Michael van der Mark (Pata Yamaha Official WorldSBK Team) takes the double victory

The floodgates were opened on Saturday, and now there’s no stopping Michael van der Mark (Pata Yamaha Official WorldSBK Team). The Dutchman closed an extraordinary weekend at Donington for the Pata Yamaha team with the second win of his MOTUL FIM Superbike World Championship career, a win against oll-odds in another fascinating race at the Prosecco DOC UK Round. A first double for van der Mark, and a first podium for Toprak Razgatlioglu (Kawasaki Puccetti Racing), beating none other than Jonathan Rea (Kawasaki Racing Team WorldSBK) in the closing stages.

A poor start from Alex Lowes (Pata Yamaha Official WorldSBK Team) saw him gobbled up in the mix at the first turn, ceding two places to Lorenzo Savadori (Milwaukee Aprilia) and Leon Haslam (Kawasaki Puccetti Racing). The Yamaha managed to pick both off in short order however, Haslam at the Fogarty Esses (before the wildcard crashed at Melbourne), and the Italian in lap 2. Meanwhile, the two KRTs held a surprisingly aggressive battle, while the other Yamaha quietly made it through to the leading group from ninth on the grid.

Quickly, one third in, the battle for the race turned into a three-way fight, with Lowes sticking strong but Rea taking ghost shots around Craner and Melbourne. Meanwhile, van der Mark, much like he did on Saturday, stalked the front two, biding his time. At the back, Razgatlioglu and Savadori fought nail and tooth for fourth, a few seconds back on the leading group.

After two perfect thirds to the race, it all came apart for Lowes at the end. On lap 17, Rea found a spot at the Melbourne loop, where so many moves have been made this weekend, and pushed in front from the inside of Lowes, with van der Mark picking off the scraps at Redgate and moving to second. And just like yesterday, one lap later, van der Mark made his race-winning move at that same turn 11. The Ductchman shot off from there, giving his pursuers no option to take away his incredible double.

There was one more surprise left at Donington, however. Amidst the front group bickering, Razgatlioglu found himself with the gap now non-existent. Showing an impressive late-race pace, the Turkish rider picked off Lowes with ease, before setting his sights on the three-time WorldSBK champion. And with one lap to go, he moved up to second. A fitting epilogue to Kenan Sofuoglu’s retirement in the last Round: Turkey has a new hero for years to come.

With Rea finally in third, his worst result since the Thai Round, and Alex Lowes repeating his Saturday performance in fourth, there was another comeback behind. Chaz Davies (Aruba.it Racing – Ducati) found his way all the way back to twelfth at the start, but a neat ride from the Welshman pushed him back to fifth, ahead of Tom Sykes (Kawasaki Racing Team WorldSBK), who couldn’t continue his incredible Donington streak and leaves with his first finish outside the podium since 2011.

Savadori made it to the checkered flag in seventh, just ahead of Leon Camier (Red Bull Honda World Superbike Team), who pipped Jordi Torres (MV Agusta Reparto Corse) to eighth at the final turns, and leaves the UK Round with two top-ten finishes on his return. Closing the top ten was Loris Baz (GULF Althea BMW Racing Team), with Marco Melandri (Aruba.it Racing – Ducati) ending a weekend to forget down in eleventh.

P1 – Michael van der Mark (Pata Yamaha Official WorldSBK Team)
“It just incredible, I can’t believe it, I had quite a good race, I struggled a bit but I didn’t feel as good as yesterday. So I followed Alex and Jonny,  just used my head and in the last few laps they had a battle and I managed to pull away. To take the first win yesterday and now the double, its just incredible.”

P2 – Toprak Razgatlioglu (Kawasaki Puccetti Racing)
“Today is my team bosses birthday, so a big happy birthday to him! But this position is very good, I am really happy: It’s my first podium so I am really happy, thank you!”

P3 – Jonathan Rea (Kawasaki Racing Team WorldSBK)
“It was a huge battle, I really enjoyed it and it was quiet close, I hope everyone out in the crowd and at home enjoyed it. But unfortunately I am disappointed with myself, I ran into arm pump issues which meant I found it hard to change direction and, I had to back off. Third was all we could manage, I’m sorry to my team as they gave me a bike that could win but that as all I could do.”