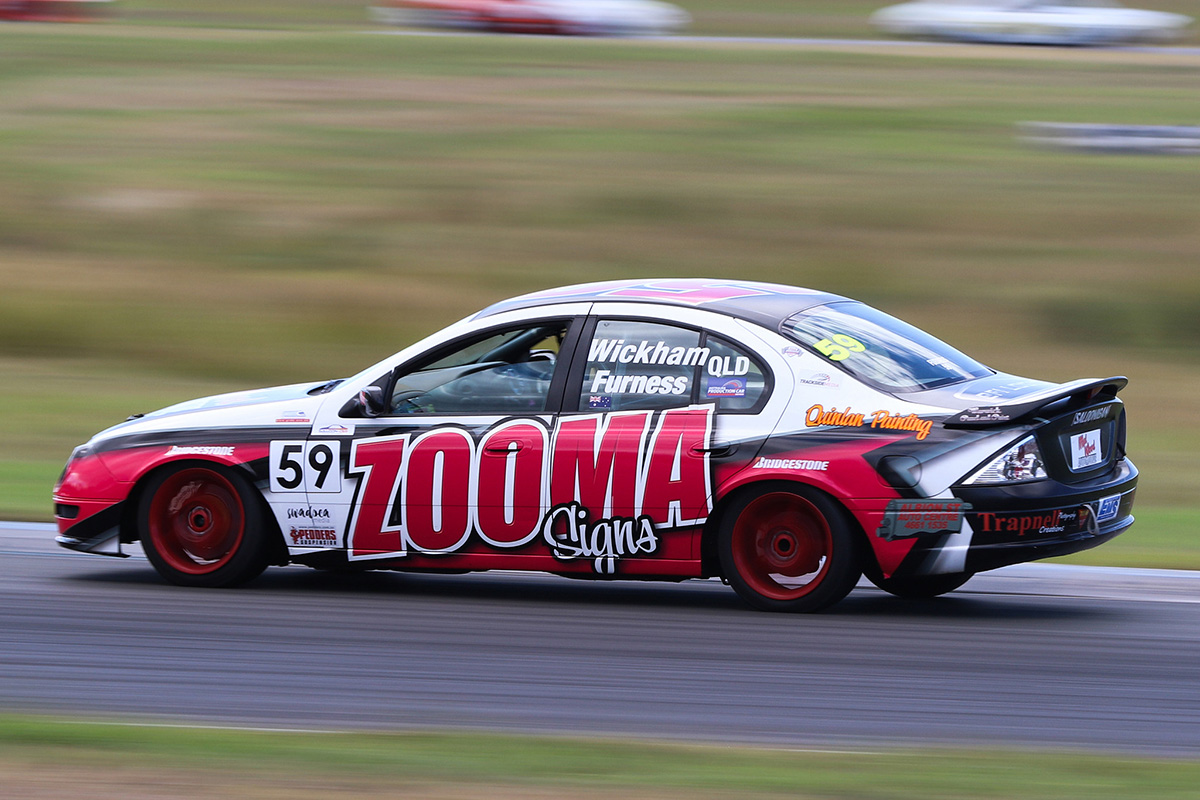 In a close qualifying session, Furness set a 1:24.9246 to earn pole position by two-hundredths of a second over Brock Mitchell’s AU Falcon (1:24.9504), who teamed up with former V8 Ute racer Maxim Erickson.

Starting in third, Carter lead early in race one and handed over to Andriske to take the chequered flag first. However, a 30-second time penalty for a jump start relegated them to third, handing the win to Furness and Wickham. Kearns and Cowham came home second from the rear of the grid, after they failed to set a qualifying time with a fuel pump failure.

Mitchell was caught in a lap one tangle with Carter and Wickham, and battled with resulting damage and gearbox issues to limp hone in sixth.

On his Saloon Cars return, Cowham dominated the opening stint in race two to lead by the length of the front straight before handing over to Kearns. Furness hunted down Kearns to be within striking distance when a late-race clampdown was called for a stranded production car. With the race extended a further ten minutes over the time certain finish, Furness caught and passed Kearns around the outside of turn six on the final lap and dragged Kearns to the finish line to win by two-hundredths of a second.

Furness claimed the drive in race two as the toughest in his career to date.

“I’ve never got out of a race car and collapsed from sheer exhaustion before, that was the hardest drive i’ve ever done in my life,” he said.

“We used the same strategy as the first race. Brad [Wickham] did the first 20 minutes to stick with the main group, after a quick driver change and then try put in qualifying lap after qualifying lap to close down the gap.

“To actually do a lap six tenths faster on the final lap of the race than I qualified on pole with was just unbelievable.

“This weekend is a special weekend for me personally, and to have a near-on perfect weekend and to come out leading the championship is fantastic.

“Thanks to Mal and Daniel from Mal Wood Automotive for coming out this weekend, as well as Zooma Signs and EFI Logic. Those guys have got this car absolutely honking at the moment after a lot of dyno time and a big effort behind the scenes to get it to where it is.”

Round three of the 2018 Lighthouse Electrical Queensland Saloon Car Series will return to Queensland Raceway on July 28-29 for the Australian Production Cars ‘Fight in the Night’ at the Shannons Nationals, and the second and final round of the Mal Wood Automotive Enduro Cup.