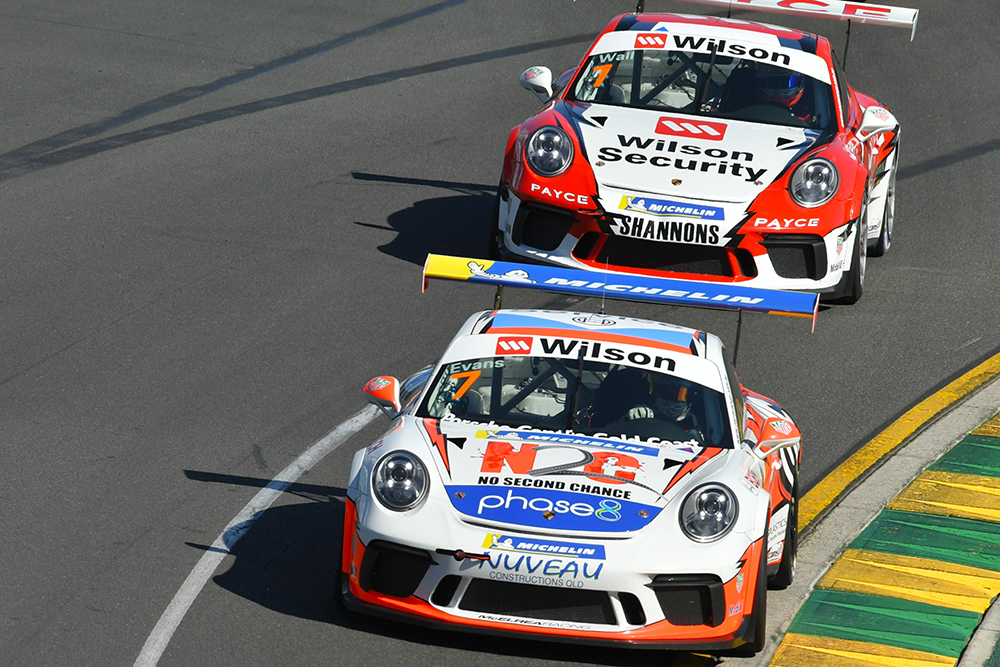 This week our Driver Profile is McElrea Racing’s Jaxon Evans, the young Kiwi racer resides on the Gold Coast after making the way across the ditch full time in 2005, he’s grown up around Motorsport with both his mum, uncle and grandfather being racing drivers, with the later being Rob Lester the Manawatu Car Club president for many (yes many) years at the Manfeild Circuit in Fielding.

Evans is in his second year full time in the Porsche Wilson Security Carrera Cup Australia series with McElrea Racing, we asked the boss Andy McElrea a few questions and to give us his thoughts on the young Kiwi.

How long have known Jaxon? I’ve known Jaxon since he was adopted as a very small person by my good mates John & Debbie Evans, so all his life! I am also the godfather of his big brother Josh.

What would you say is Jaxon’s best qualities both on and off the track? He is extremely calm, which you will see both on and off the track. Even from watching him in his early days karting, he was never a flamboyant driver but always very tidy and made very few mistakes. Since being a young kid he has also been very self-assured, but never arrogant, and some say he’s not a bad looking rooster, so he’s pretty much the full package. (LOL)

How well has Jaxon fitted in with MR? Very well, if he didn’t we would have sacked him! He has evolved from cleaning wheels and helping the mechanics to the point where he is (our team manager) Leigh Geyer’s admin assistant doing a lot of the race weekend paperwork, component lifting and he also operates our Motionforce1 racing simulator for our MR Driver Development customers.

What is Jaxon’s path for the future?  Same as Matt Campbells? His ambition to be a professional race driver was certainly the same as Matt’s. They are best mates now and if Jaxon keeps up the good work he may go to the Porsche shootout in Germany and have a good crack at winning it like Matty did. In any case, he knows there is a lot of water to flow under the bridge so we’ll have to wait and see!

The latest round of the Carrera Cup Australia was at Melbourne’s Albert Park where the series is a long time support category to the Formula One event.  Evan’s was never out of the top four (where he qualified on Thursday) and in fact was never out of the top two in all four races, where he won the final race for the weekend, locking in the win for the event.  Just like he did in round one at the Adelaide 500 a few weeks back.

We chatted to Jaxon after the event to get his view on how it went from the drivers seat in just his second visit to the Grand Prix.

“To get back-to-back round victories for the first two rounds is obviously the perfect way to kick off the year and show that we’re not here to muck around, but to fight for the championship, without some luck the overall result would have been slightly different and I really feel for Woody [Dale Wood], who was solid all week. I was looking forward to another close race, it’s a shame that’s the way it went down” told Velocity.  In the final race there was an incident that saw Wood turned around at the first turn clearing the way for Jaxon to lead and win the race.

“We had some great speed in the Morris Finance / Bosch Services Cup Car every time we hit the track, it’s just so hard to pass when the competition is allowed to block/defend on every lap something new for the category this year.  Was pretty special to have my McElrea Racing teammate, Tim Miles sharing the top step of the podium with me. A real credit to the team and our engineer Leigh Geyer”.  Tim Miles won the Pro-AM class in his second visit to the Grand Prix event.

“It’s a dream come true to be able to stand on the Australian Grand Prix podium and hear the New Zealand national anthem played. It wouldn’t be possible with out my amazing group of sponsors, supporters and family! Hopefully this momentum can be continued for the rest of the year.”

Evans also competed in the Bathurst 12 Hour event this year in the Objective Racing McLaren 650S along side Tony Walls, Warren Luff and Tim Slade.  From the McElrea Racing Page; “Bruce the Objective McLaren was quick in practice as the drivers including 12 Hour rookie Jaxon, cycled through the car. Unfortunately, their seat time was restricted by a persistent fuel pick-up problem which cost car #11 a certain Top 10 shoot-out start and they started the race from 24th”. ” Luffy started the race then handed over to Tim. Wallsy did a fantastic stint late in the morning and got the car up to 12th outright and 3rd in Pro-Am before handing over to Jaxon.  The boys steadily made their way towards the front throughout the day and despite the ebbs and flows in relation to other cars strategies were heading for a certain podium finish in Pro-Am when the 13-hour old starter motor failed at the last pit stop. The rules state the car must start under its own power and it would have taken longer to change it than the time remaining in the race, so car #11 was regrettably withdrawn from the race.”

The next event for the Porsche Wilson Security Carrera Cup Australia series is at the Phillip Island 500 event with the Supercars 20-22 April.