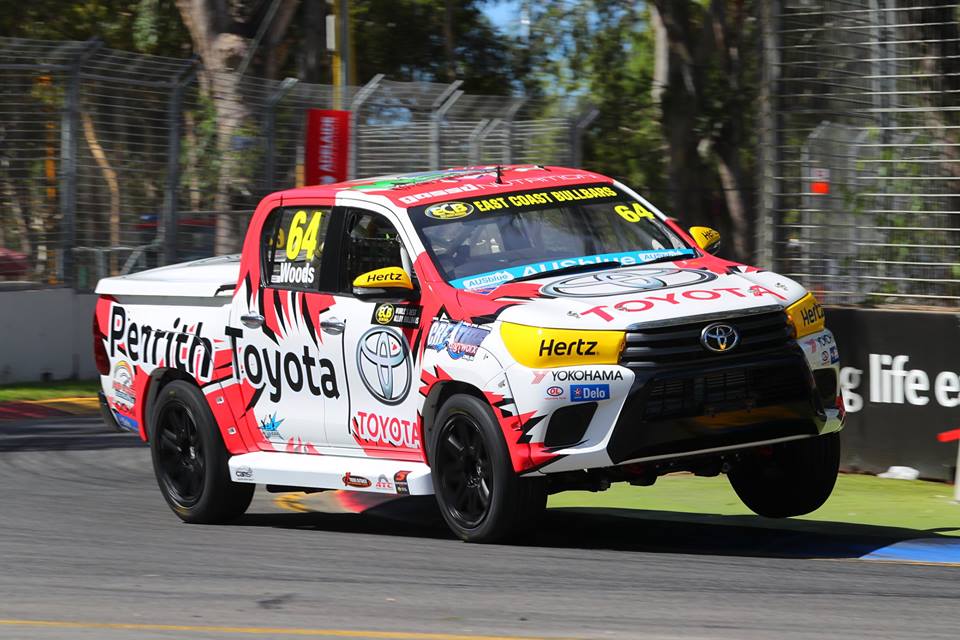 Craig Woods #64 can dump his Adelaide bridesmaid tag after today as he etched his name into the history books. He is the first-ever round winner in Australia’s newest motor racing category, the ECB SuperUtes Series.

“The last two times I have raced here, I have finished second for the round,” said the Western Sydney Motorsport pilot. “So this one is special – a round win.

“It would have been nice to get a race win, but three seconds is not a bad alternative.”

The final race on the streets of Adelaide had Woods on pole. But Holden Colorado driver Tom Alexander got the jump and led through the first chicane after the rolling start.

However, the Penrith Toyota Hilux driver surged into the lead at turn four to head the field at the end of the opening lap.

On the second lap Alexander returned favour at the same corner but Woods wasn’t done, relegating him at turn nine. Their contest allowed Ryal Harris to slip past and win while Woods consolidated in second with his Toyota reliability winning through, while the other makes fell by the wayside.

Finishing just 0.8 seconds behind the winner, he had quite a buffer over third place in the end, the Toyota only missing the beat slightly in race two, due to a turbo glitch.

“We were not the fastest, but not far away. It is a great start for our team and our Penrith Toyota-backed Hilux and the round victory gives us great confidence moving onto the second round,” Woods concluded.

Round Two is at Winton Motor Raceway 18-20 May.