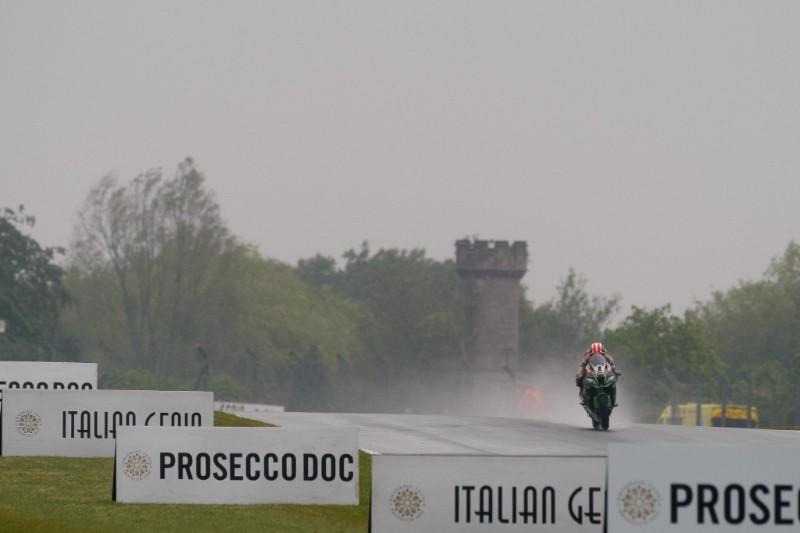 Friday quickly and surely turned into a constant game of one-upmanship between the pair. With each rider taking one Free Practice apiece, the tie-breaker boiled down to the final seconds, with Sykes appearing to have clinched it at the checkered flag. But it was Rea, who had gone through the gravel a couple of minutes earlier, who ended up taking the lead with a last gasp flying lap. The rivalry between the pair here at their home race bodes well for Saturday and Sunday.

However, the KRT riders cannot take their dominance for granted, with even the smallest of mistakes at Donington potentially ending a rider’s options for the day or, even, weekend. Several of their closest rivals found this out the hard way in a drying final Free Practice session, with Chaz Davies (Aruba.it Racing – Ducati), Xavi Fores (Barni Racing Team) and Michael van der Mark (Pata Yamaha Official WorldSBK Team) all hitting the ground. For the first two, their crashes mean they’ll have to battle their way through the Superpole 1 tomorrow.

Lorenzo Savadori (Milwaukee Aprilia) shone again in the final session of the day, with the third best lap time. Another automatic Superpole 2 entry for the Italian, who will be desperate to see it translate into more good results throughout the weekend. Behind Savadori, Alex Lowes (Pata Yamaha Official WorldSBK Team) confirmed his good form with the fourth fastest time, ahead of Eugene Laverty (Milwaukee Aprilia) in fifth.

Van der Mark, recovering quickly from his earlier crash, made it through Friday in sixth, with Leon Haslam (Kawasaki Puccetti Racing) showing his Donington experience with the seventh fastest time. Loris Baz (GULF Althea BMW Racing Team) made it through the checkered flag in eighth.

Making his WorldSBK debut at Donington, Bradley Ray (Buildbase Suzuki) did not disappoint, with the young home talent amazingly closing Friday in ninth position. An astonishing result for the 21-year-old, particularly considering he didn’t take part in FP1.

Closing the top-ten, Marco Melandri (Aruba.it Racing – Ducati) barely scraped his way through in tenth, after remaining in the lower end of the timesheets throughout most of the afternoon. He was just 0.004 seconds ahead of another Donington debutant, Luke Mossey (Team Pedercini Racing), who put in an amazing performance, especially after only finding out that he’d be riding at Donington yesterday.