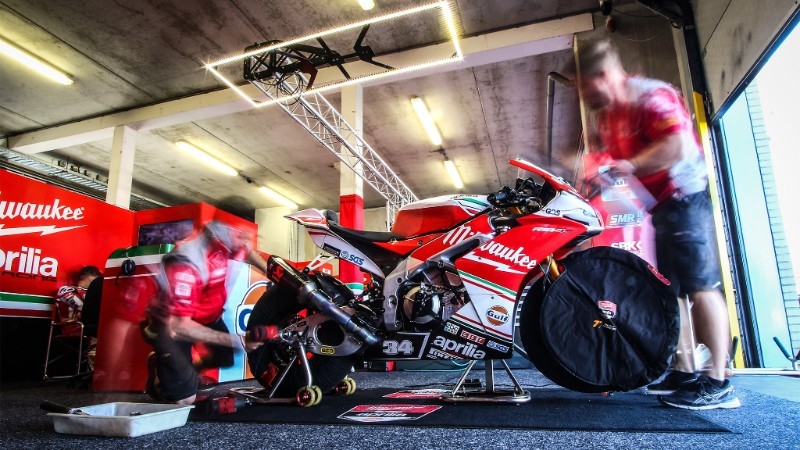 Aprilia’s only win at Imola came with their previous model, the twin-cylinder RSV1000, back in 2001, Race 2. Since then ten more podiums have followed, the last ones were three 3rd positions in the second races held here from 2013 to 2015. Last year, their best results were an eighth position with Lorenzo Savadori in Race 1 and a seventh with Eugene Laverty in Race 2.

BMW scored their two podium finishes at Imola in 2012 with Leon Haslam, who was third in both races. Last year their best results were a 14th with Raffaele de Rosa in Race 1, whilst Jordi Torres sat out due to a stomach bug. He returned for race two to secure a top eight.

In the last two years Ducati have strengthened their record of WorldSBK wins at Imola, as Chaz Davies has recorded consecutive doubles in 2016 and 2017. The British rider took their total wins to 17 which is more than their rivals combined (Honda 7, Kawasaki 4, Aprilia 1). They have set pole here for the last three years, the only string of three by a single manufacturer at this track.

Honda are the second most successful team at Imola with seven wins, the last three picked up by Jonthan Rea in 2011 Race 1 and a double in 2014. Last year their best results were a 10th in Race 1 by Stefan Bradl and a 12th by Nicky Hayden in Race 2. That second race was the last one for the American rider before his tragic death on the 22nd of May, following a cycling accident while training.

Kawasaki have won four times around Imola, with a double from Tom Sykes in 2013 and another from Jonathan Rea in 2015. In the last two seasons however they had to surrender to Chaz Davies, as both Kawasaki’s finished second and third behind the Ducati rider three times out of four. This was in both 2016 races and last year’s Race 2, whereas in Race 1 Rea finished 2nd and Sykes 4th. Kawasaki have scored 16 podiums here so far, and all of them with one of their current pair of works riders, from 2012 onwards. They are the second manufacturer with the most podiums here behind Ducati (38).

There has been three podiums for Yamaha at the Italian track. These were all third places which were secured in the only 2005 race by Noriyuki Haga, in the first 2006 race by Andrew Pitt and in 2010 Race 2 by Cal Crutchlow. Last year their best results were a seventh from Michael van der Mark in Race 1 and a sixth with Alex Lowes in Race 2.

MV Agusta have scored points three times here, which were a sixth and fifth with Leon Camier in 2016, and another sixth in Race 1 last year.