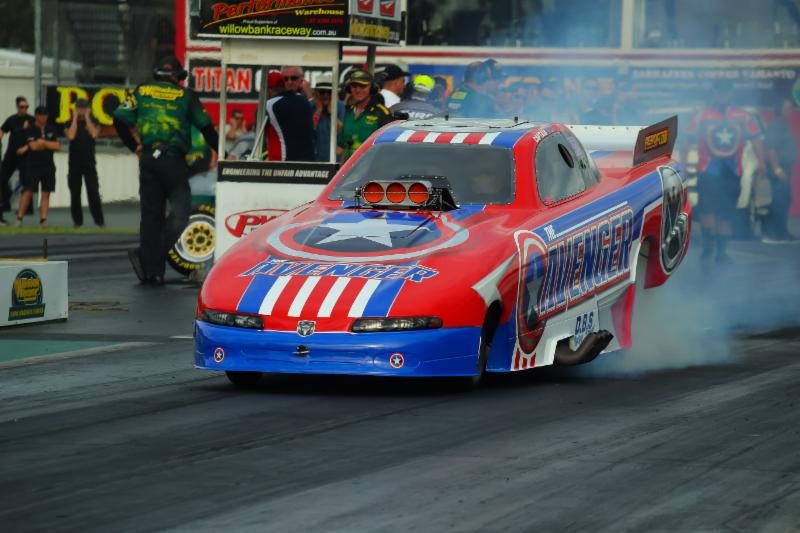 Tamborine’s Dan Donnelly, 24, and brother Jake Donnelly, 22, are the lone privateers taking on the might of the Aeroflow Outlaw Nitro Funny Car Series’ stable of travelling race cars – and they would love nothing more than to beat up on the invaders.

Dan drives ‘The Avenger’ Funny Car and has been chasing a new engine program since exploding a motor at an event in Western Australia.

“The car was probably on one of its fastest passes before it blew up, I had no idea it was coming,” he said. “It was like getting punched in the chest. After the initial shock your head then turns to getting the fuel turned off and pulling the car up, making sure it isn’t on fire.

After the adrenaline-inducing blow up, Dan said he was a little apprehensive getting back into the cockpit.

“The first run back was a bit nerve wracking but you just have to accept that it is a risk of driving a Nitro Funny Car and it can happen to anyone at any time.”

Dan is no stranger to Willowbank Raceway, with the Donnelly family a mainstay of the venue. He also drives a 1957 Chev in the Top Sportsman class, but the thrill of the Funny Car is unique.

“’The Avenger’ is different to anything else I have ever driven. It’s a car you really have to muscle around as it accelerates down the track.”

While Dan endured the lows in Perth, Jake enjoyed the highs as his ‘Bumblebee’ Funny Car ran one of its best ever passes, giving him plenty of confidence for this Saturday’s event.

“These cars are always a challenge but they can be very rewarding when it all goes right,” he said. “’Bumblebee’ has been in really good form and we’re hoping we can put up a 5.6sec. time this weekend.”

Far from seeing his driving gig as a tough one, Jake said the hardest part is the lure of making the perfect run.

“The toughest thing is getting out of the car at the end of the night, they are so addictive you just want to keep going,” he said. “We can only ever think of going faster and faster.”

The Donnelly family will also be a major part of the 51st Annual Gulf Western Oil Winternationals from June 7 to 10 at Willowbank Raceway, with father Jason joining in on the fun. The family has developed a reputation for extravagant pit areas that include themed restaurants and lounges.

“I will be in Supercharged Outlaws, we will have Dad in Pro Slammer and Dan in Top Sportsman,” Jake said. “We love the atmosphere of the Winternationals and Mum loves to come up with ways to make it fun in the pits.

“Most of our pit crew is made up of families and people we used to race with in the Junior Dragster days. When you are spending four or five days at the track you don’t want to make it boring!”

Young fans should make sure to get to Willowbank Raceway by 2.30pm on Saturday for the Aeroflow Outlaw Nitro Funny Cars Pit Party, where Captain America will be making a special appearance with ‘The Avenger’ and the Donnelly family.

In addition to the Aeroflow Outlaw Nitro Funny Car show, the third round of the Queensland Drag Racing Championship will be running simultaneously, providing an action-packed evening of entertainment.

For more information check out www.willowbankraceway.com.au