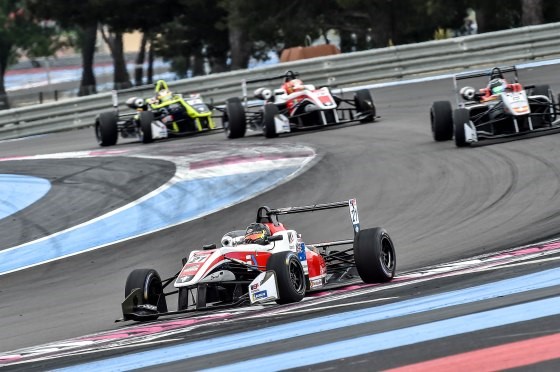 After the misfortune of yesterday, we were very keen to get off to a good start in Qualifying 2. Conditions were dry, and on my first set of tyres at the start of the session I was sitting midfield, but knew that I could go quicker on the second set.

After a brief wait in the pits (to time our best laps on the tyres for the end of the session) I went out on my second new tyre run. On my first flying lap I put together two purple sectors (fastest) in sectors 1 and 2, and an ok 3rd sector which put me in P2 with a couple of minutes to go. As the session completed however, this became P9 as others compeleted their flying laps, yet my time of 1:58.6 was only 0.2s off 3rd, and 0.4s away from P2, an incredibly competitive field!

In race 2 I got away reasonably well off the line and battled hard through the first few corners wheel to wheel to maintain my position but in the end I settled in to 10th place with the majority of the field nose to tail. Throughout he first lap I raced assertively until in lap 2 the driver behind made a late move into the chicane with another driver forcing their way through at the same time.

The battle was still on however, and the following lap I was able to get into a position to take both of them at once around the outside into turn 3. I was so close to making the move stick, but as I had my nose in front one of them forced me wide which meant I had to go wider still to avoid the nasty curb at that point which would have damaged the floor of the car.

This battle continued for the remainder of the race with me from time to time getting in to a position to make a move yet finding no way through as they defended their positions.

The level of intensity in the racing over here is amazing, and I am making good progress with my race craft and am learning a huge amount from Mick, Tom and the team.

All of the team have worked huge hours over this event, and it is going to be a late night for them again travelling home. They are an extremely professional team, and I am very fortunate to have the opportunity to driver for them.

Thanks to everyone who has followed me again, and for all the messages of support. Thank you to the team of people investing in my racing, and thanks of course to my sponsors Lazersafe, High Energy Service, Rosehill Waters, ES2, The Wealth Designers, Edith Cowan University, Kingsway Community Bank Branch, Fullworks Firesafety, Grand Toyota Wangara, Inspired Insurance Services, Rvend, Online Logistics Solutions, Signarama Joondalup, Walker Wayland, F45 Hillarys and Trizone Fitness.

Looking forward to Round 3 at the iconic Circuit de Spa-Francorchamps in Belgium!