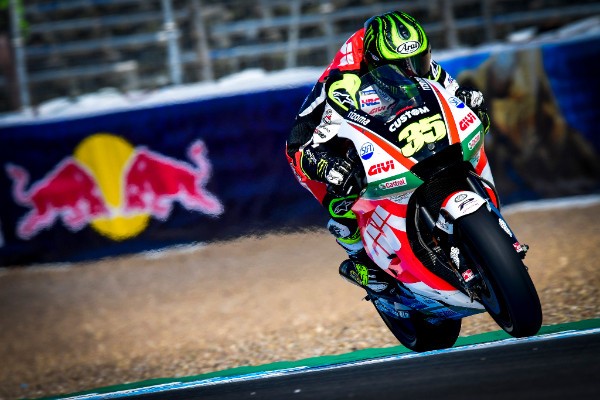 It’s tight at Jerez on Day 1, including a crash for Marquez, Independent Teams flying high and another stunning performance from recovering Pedrosa. (Photo: MotoGP)

Independent Team rider Cal Crutchlow (LCR Honda Castrol) rules the roost in the Gran Premio Red Bull de España as actions ends on Friday, with the Argentina GP winner taking to the top in FP2 and leader on the combined timesheets. What does that mean? On a Friday as close as this, it means he was 0.028 clear of Dani Pedrosa (Repsol Honda Team) in P2, 0.091 ahead of Johann Zarco ( Monster Yamaha Tech 3) and still not even a tenth in front of Andrea Iannone (Team Suzuki Ecstar) in fourth

As well as the incredible equality of the top four within a tenth, the top 15 ended Day 1 within a second and the whole grid was covered by two seconds – a tantalizing prospect for race day if it remains the same.

The headlines didn’t stop there. 2017 Jerez winner Pedrosa, who is still recovering from a broken wrist, put in a stunning performance once again to not only threaten the top but also show some key consistency – with Zarco just behind him and top Yamaha. Iannone kept his solid form rolling after his rostrum finish in Texas, just ahead of what was another key moment of the day: reigning Champion Marc Marquez (Repsol Honda Team), despite having shown awesome pace throughout both sessions, crashing out towards the end of FP2 – rider ok

The man right behind Marquez after Day 1 was Championship leader Andrea Dovizioso (Ducati Team), who went fastest in FP1, with his teammate Jorge Lorenzo taking seventh on Friday at the track at which he took his first podium in red in 2017. Jack Miller (Alma Pramac Racing) was the top Independent Team Ducati rider in P8 overall after more solid top ten pace, with Valentino Rossi (Movistar Yamaha MotoGP) taking ninth overall after a late move up from outside provisional Q2 entry.

The man completing the top ten was Pol Espargaro (Red Bull KTM Factory Racing), after the Spaniard put in an incredible charge in FP1 to end that session in third and the day in tenth overall.

Maverick Viñales (Movistar Yamaha MotoGP) was P12 and will have his sights set significantly further up the timesheets on Saturday, as will Alex Rins (Team Suzuki Ecstar), who was P14 but missed the Spanish GP in 2017 due to injury, turning a wheel in anger at the venue for the first time this year. Wildcard Mika Kallio, riding a first version of the 2019 machine for Red Bull KTM Factory racing, was P16 on Day 1.