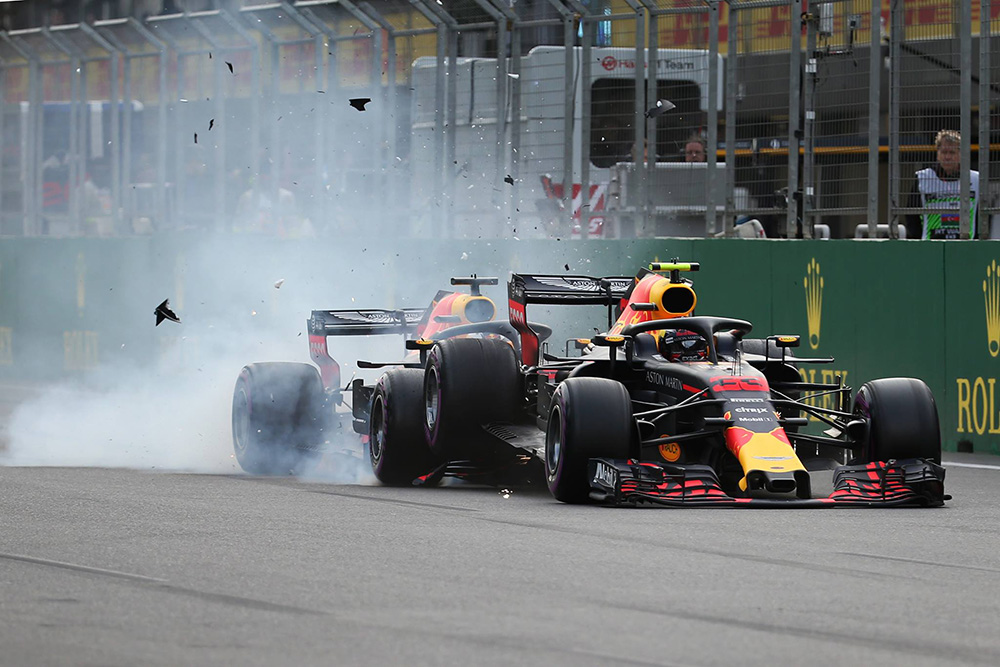 The Baku Formula One Grand Prix had plenty of action, actually this is probably keeping it lightly, here are the quotes from Daniel Ricciardo and Max Verstappen after a huge race and an even bigger team crash out.

In our opinion they are all “towing the company line” – we would love to be a fly on the wall in the debrief meeting back at the factory!  one thing we have noticed with this press release is the lack of “funnies – comment that they normally have under their press releases LOL”

“For sure it was a chaotic race and I guess we caused most of that. I have watched a few replays and the only thing we can both say is sorry to the Team. This is the last thing we wanted. We want to be able to race and I’m thankful that the Team let us race. We tried to keep it clean and give each other room but we were racing hard and in the end it cost us. I’m not going to talk about the incident but this was the worst case scenario and everyone is pretty heartbroken. I will personally apologise to the Team and once again I’m just sorry we are all in this situation when everyone has worked so hard to give us such a good car.”

“Today was just really disappointing for the Team and we lost many points unnecessarily. I don’t think we need to speak about fault because at the end of the day we are racing for a team and representing a lot of people, so when this happens it is not good for both of us. The tow was very strong and our speed was very similar, so we were then always very close to each other. Before the accident it was hard racing but fair I think and we gave each other space, we had a little brush with the wheels but I think in racing that can happen, but what happened afterwards is not good. We will learn from this and have to make sure it doesn’t happen again. I don’t think not letting us race anymore is the way forward but of course we will talk this over as a team and learn from it. We are always very fair to each other and have spoken immediately about this. For now, I’m just sorry and want to apologise to the people we represent here and at the factory as well.”

CHRISTIAN HORNER, Team Principal: “It was a really frustrating race for the Team today. After some hard racing between the two drivers throughout the Grand Prix, unfortunately, contact was made after the pitstop resulting in the retirement of both cars. Obviously, for the Team it is hugely disappointing. We allow our drivers to race wheel-to-wheel, which they have done to great effect during the last two years. Unfortunately, today has happened and there is no blame apportioned to either side. It is hugely frustrating for the Team and the drivers have apologised. The most important thing is to learn from today and ensure that we avoid a repeat situation.”