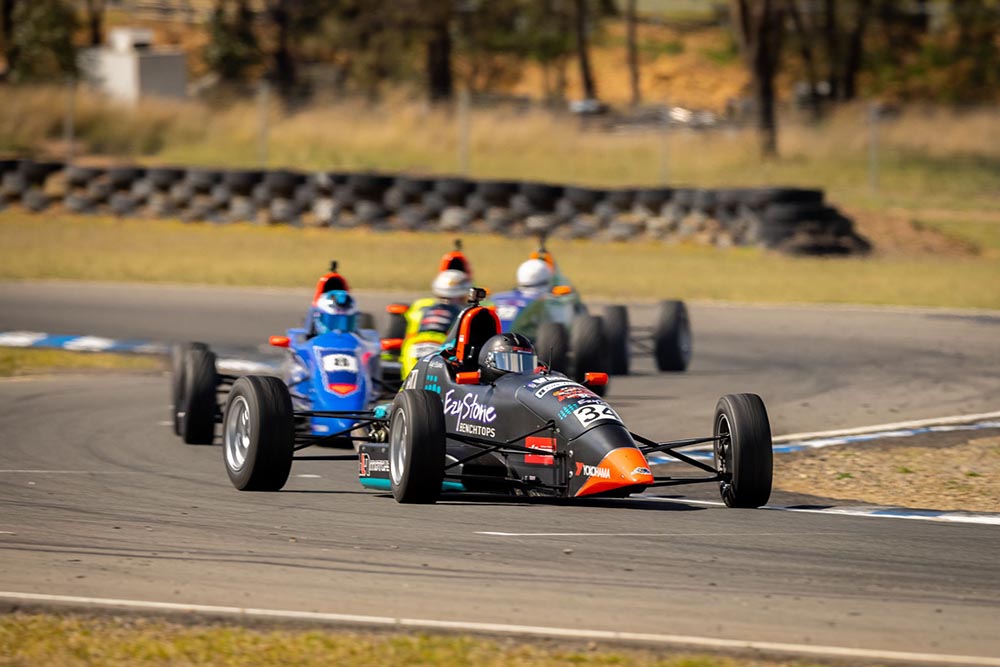 Kyle Evans made a much anticipated return to racing after COVID19 in the Formula Ford category at Morgan Park during the latest round of the Queensland State Championship.

With the South-Eastern seaboard of Australia hit once again by the pandemic, Kyle’s race programs, which had centred upon the Australian and NSW Championships, were brought to an abrupt and indefinite pause.

Most Australians have painfully endured the roller coaster ride of infections, restrictions, recovery and then more infections has become an often frustrating cycle and the new normal. For a 16 year old with a dream of a motorsport career and a Duratec powered Spectrum sitting race-ready in the family garage, the cycle must be excruciating, though with Kyle Evans you simply wouldn’t know. 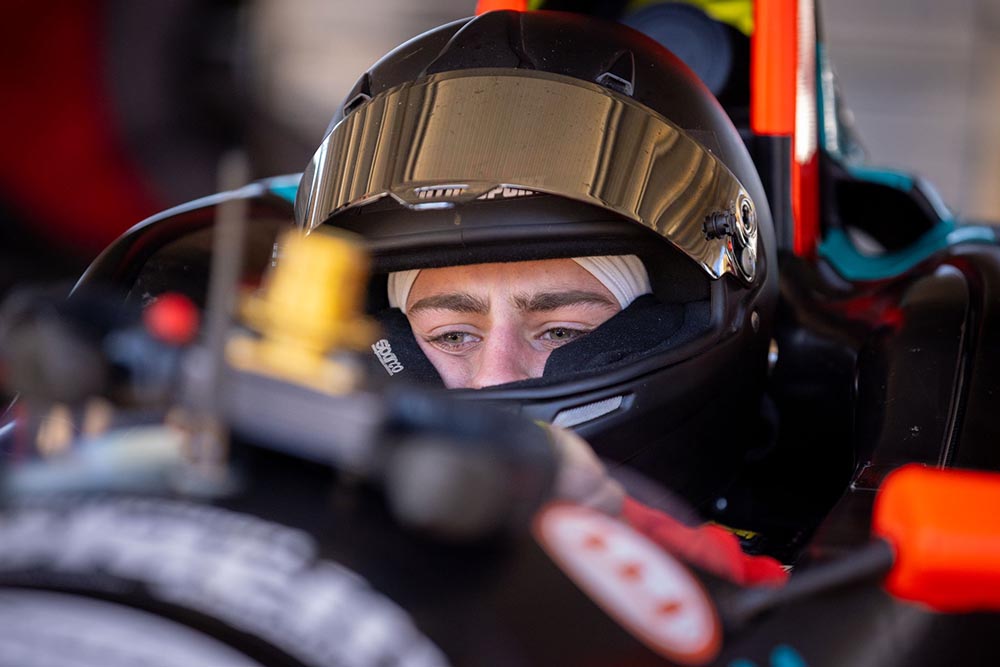 The quiet, level-headed nature of Evans and his family have shone through as they take each set back on the chin and look for the best racing opportunities. The Queensland resident was fortunate to see racing largely continue throughout the larger portion of 2021. Having raced in Round 1 of the 2021 Queensland Formula Ford series, Evans missed the following two rounds with interstate commitments, while Rounds 4 and 5 were cancelled.

Evans waited as small clusters of COVID outbreaks across Brisbane threatened to derail yet another round. The eventual all-clear was met with both relief and joy for Kyle as the team packed the black EzyStone Spectrum for the trip to the Morgan Park circuit near Warwick. 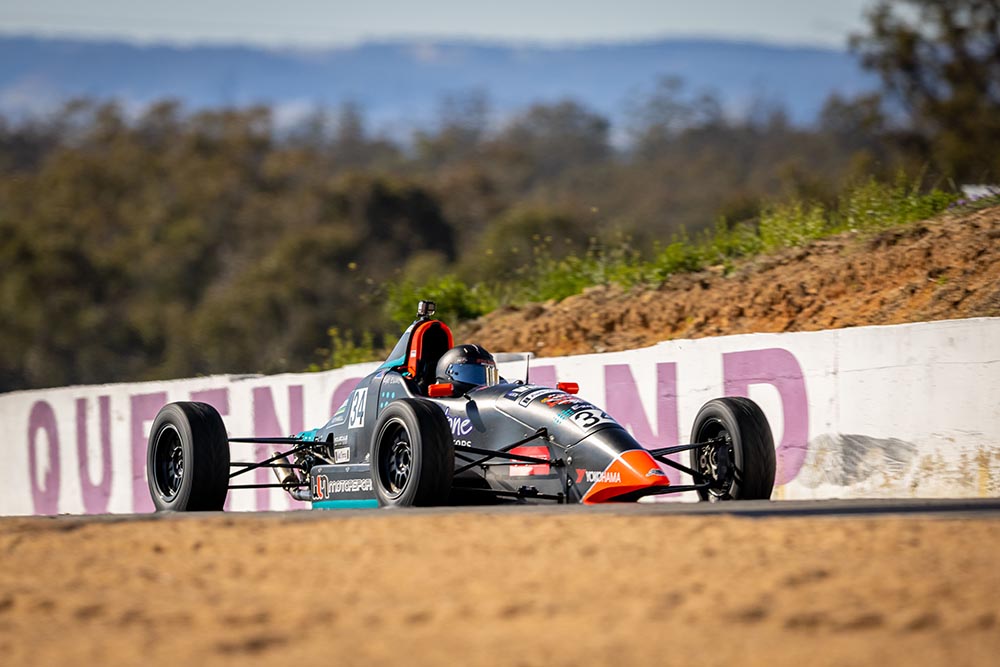 “Saturday morning brought an early start to the day, with the sounds of ice crunching under foot and shimmering crystals on the windscreen evidence of the chilly 1 degree temperature.

The Formula Fords were third out for qualifying. This is the usually the time I close my eyes to focus, visualise every part of the track and get myself ready to race. This time I found it a little more difficult to do so as I pushed back waves of excitement for the racing that was about to happen after so many months on the sidelines.

It was also awesome to be back at Morgan Park Raceway, a track that had been a part of my life since my motorsport journey began. There were 20 entries in the Sports and Racing Car field with varying levels of speed and experience, so qualifying was definitely going to be interesting.

Lap five really caught my attention! I was driving down the main straight at around 190kmh when I noticed oil on the race line, just before turn one. I tried to avoid it and just caught the edge with my rear left wheel. I spun, jumped the ripple strip, slid back across the track and into the gravel. That impact with the ripple strip bent the left rear suspension and I couldn’t get the car started in any case. I gave the sign to the recovery team and was given a lift back to the garage. 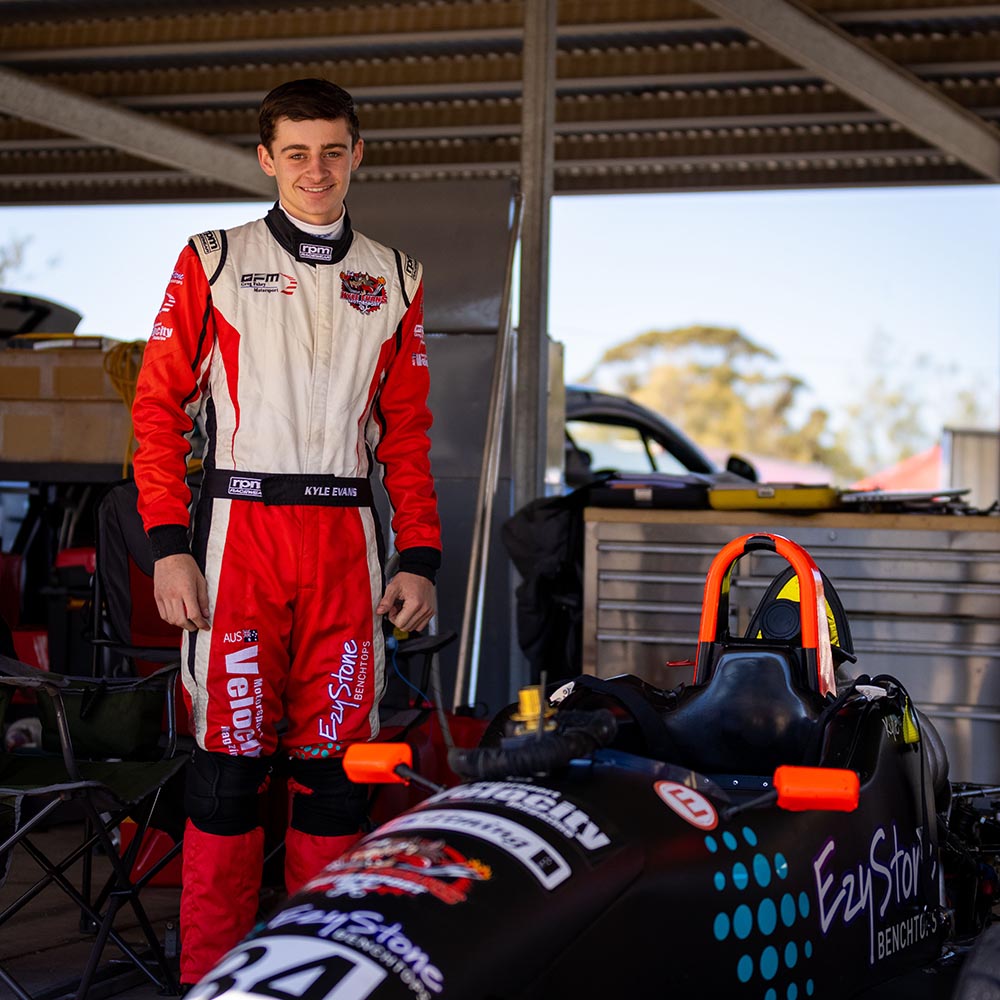 My weekend wasn’t looking too promising with a lengthy repair and not much time to spare before the first race of the weekend.

Dad sent me back to the trailer to change while he assessed the damage.

One thing I have appreciated during my brief time in Formula Ford is how everyone puts the category ahead of self interest. From the moment the car returned to the garage, there were people coming over and offering help in every possible way.

Ryan McLeod from Racer Industries provided the parts we needed but hadn’t brought in the trailer, while Greg Fahey gave us some additional tools so that Dad and I could work on the repairs simultaneously. Tim Hamilton even came over with a vacuum cleaner to remove the gravel that had somehow got into the cockpit and side pods. My younger sister Ursula and Mum Lee-Anne chipped in as well to hold parts and pass over tools to save precious minutes.

We had literally minutes to spare before the cars were called to the dummy grid for Race 1. Even though it was a last minute finish I was confident that the race car was ready to go. I climbed back into my race suit, jumped into the car and made my way to the grid.

At the end of that 10 lap race I had climbed from 13th on the grid to 2nd in the Duratec class and 4th outright!

We made some minor adjustments for the second race and managed to maintain 2nd place throughout the race.

Sunday morning brought the final two races for the weekend after a thorough check of the car the night before. Fresh from my first day of racing in what had seemed like an eternity I was really pumped to try and go one better!

Race 3 brought another 2nd place in the Duratec category after a race long battle for the podium.

The final race of the weekend was a bitter sweet result. While I was feeling fine running in temperatures that climbed dramatically throughout the day, the same could not be said for the tyres. They began to go off early in the race as I tried to keep the car smooth and manage the temperatures. Then the brakes began to fade which made driving all the more difficult. It was frustrating to lose positions as I nursed the car to the finish, but it was important to salvage whatever I could from the race. I eventually crossed the line in 6th. Just how important that result was came home to me a little while later.

I had no idea where I finished overall until Brett Batterby called out my name in second place. I was overwhelmed!

Our goal had been to score a podium in the Qld State Championships and it was a mission accomplished.

With so much uncertainty with the Australian Formula Ford Championship and the borders opening to NSW and VIC I am unsure of the next AFFC event. However, the next Qld State Championship Round 4 is scheduled for 19-21 November 2021 being held at Morgan Park Raceway.

Thanks to all my Sponsors, Partners; EzyStone Benchtops, Velocity Motorsport Magazine, Open Dawes Training and Aus Timing, Spectrum, St Patricks College – Shorncliffe, Autobarn Rothwell and Signarama North Lakes. Along with all my Race Fans for your ongoing support in my quest to become a professional race car driver.”