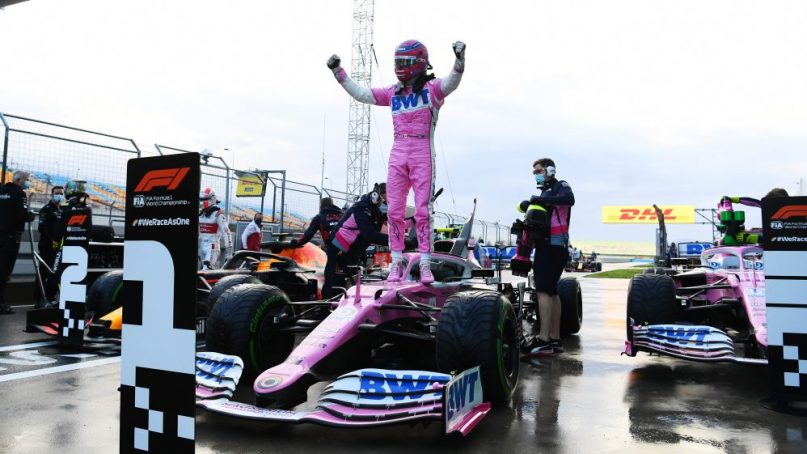 Take a circuit that has been off the F1 calendar for almost ten years. Add a freshly laid surface two weeks prior to the race. Finally, throw in cold conditions with a liberal serve of torrential rain. Mix well and you have the 2020 Turkish Grand Prix qualifying, a real recipe for more than the odd surprise.

Max Verstappen had topped the timesheets throughout practice. From the cold, dry conditions of Friday’s opening practice sessions, to the torrential rain that arrived on Saturday morning, Verstappen had been the driver to beat. Conversely, the dominant Mercedes Petronas Team struggled with grip, as did the majority of teams. Lewis Hamilton and Valtteri Bottas had held a long term lease of the qualifying penthouse, but found themselves in uncommon territory with Hamilton 6th and Bottas 9th at the conclusion of qualifying.

“The track feels terrible. Just like driving on ice. For whatever reason some can get tyres working better than us,This whole weekend has been a nightmare to be honest. The grip is so poor. It is the worst I’ve experienced in years of racing.” Hamilton was quoted by the London Sun.

Hamilton and Bottas were not the only drivers in an unaccustomed position. Racing Point’s Lance Stroll was one of the few drivers to gain confidence with the intermediate tyre during the closing stages of Q3 and used them well to topple Verstappen’s ownership at the top of the order. Verstappen had run happily on the full-wet tyre and had set fastest sector times on his first Q3 run, only to back off in the final stage of the lap when told to pit for a late switch to the intermediate tyre, a move which the Dutchman believed had cost him pole position.

“I think this is the first time this year I sit here upset. I think that says it all,” Verstappen explained during the post-qualifying press conference. “It was all going quite well on the wet tyres but already, in Q1 when I tried to go on the inters, they were not working at all even compared to other people on inters around me. So I was, in Q3, not very sure to go on inters because I felt really comfortable on the extreme [wet] tyres. I think the track was definitely leaning to intermediates; for me it just felt so poor that I think if I would’ve stayed out on the wets, I could’ve done the same lap time. Clearly something was not working for us today on that tyre, I’m just upset because actually the whole weekend we were first, it looked very comfortable, and then you lose out in Q3. So at the end of the day I don’t care where the Mercedes is.” 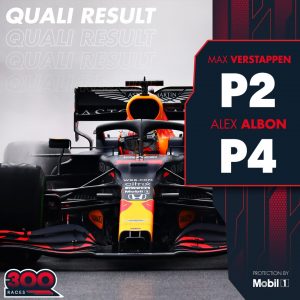 Stroll’s time of 1:47.765 gave him a 3/10ths of a second margin over Verstappen, with team-mate Sergio Perez over a second behind in 3rd. It was truly a day to remember for Racing Point. Alex Albon made it a Racing Point / Red Bull pairing at the front with the 4th fastest time, followed by Daniel Ricciardo, Lewis Hamilton, Kimi Raikkonen, Valtteri Bottas and Antonio Giovinazzi in 10th place.

Qualifying began under dark skies and persistent rain. It turned the already slippery Istanbul Park circuit into an ice skating rink which only became worse as the rain intensified. The timing screen lit up, alternating between yellow and green, as drivers battled to stay on track in worsening conditions.

Race Director, Michael Masi, stopped the session after 11 minutes with Esteban Ocon the fastest driver to that point, from Bottas, Stroll, Hamilton and Perez. The session finally resumed around an hour later with grip levels little better, even though the rain had subsided. Charles Leclerc sat outside the cut-off zone after an off at turn 1 then Romain Grosjean brought out the red flags when he spun and stuck his Haas in the gravel trap at turn 1 with 3 minutes left in the session. 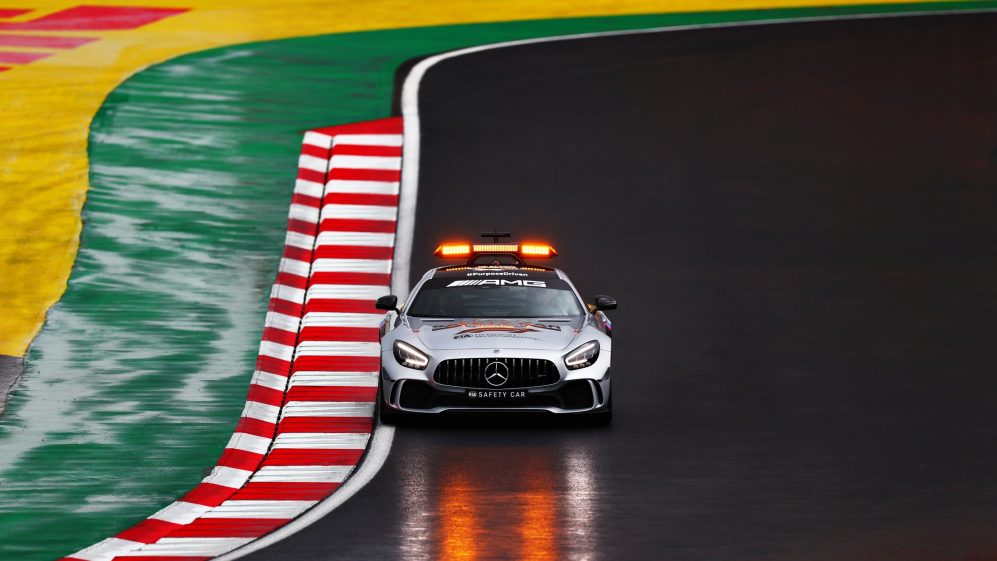 The Safety Car was sent out to assess the conditions before the action could resume after the red flag stoppage – Photo: f1.com

There was barely enough time for one flying lap when the session resumed, so teams sent their cars trundling down pitlane early in an attempt to gain track position. The lap was crucial for Verstappen who sat in 15th after a spin on intermediate tyres during the first part of Q1. Such was the improvement in track conditions that Verstappen recorded tow fastest sector times during his out lap. He jumped to the top of the order at the end of the lap, some 8 seconds faster than the previous best as Nicholas Latifi spun off in his Williams. The resulting yellow flags did nothing to hampen the efforts of those following and times continued to fall. Albon, Raikkonen, Vettel, Leclerc, Gasly and Ricciardo all improved, while Lewis Hamilton and Sergio Perez just managed to avoid relegation.

Kevin Magnussen fell from 7th to 16th and was bitter that some drivers had not slowed for the double yellow flags near the Latifi incident. With so many drivers having bettered their times and dusk fast approaching, Race Control elected to review the matter at the conclusion of qualifying.

“How can people improve when it’s yellow flags all the way around?” an irate Magnussen questioned his team as he drove back towards the pits eliminated from Q2 in 16th place. Kvyat, Russell, Grosjean and Latifi were also left to sit out the remainder of the qualifying session.

The second qualifying session began with further controversy as cars headed out on the circuit as a mobile crane continued to extricate Latifi’s Williams from the gravel. It brought back painful memories of Jules Bianchi’s tragic accident at the 2014 Japanese Grand Prix.

Esteban Ocon and Daniel Ricciardo were amongst those to express their concerns over the incident. “We were on an out lap so I was not taking any risks, obviously, [but was] still going quite fast because we needed to keep the tyres alive. It is not something that we like to see,” Ocon said.

“I remember my engineer, I think he saw it on the TV and he said there’s still a yellow for Latifi,” Daniel Ricciardo said (f1.com). “ I am quite surprised there was a green. I don’t know what the rush was. I guess they were worried by [fading] light but as we know, I don’t think that should be happening. I am quite surprised by that,” Ricciardo added. 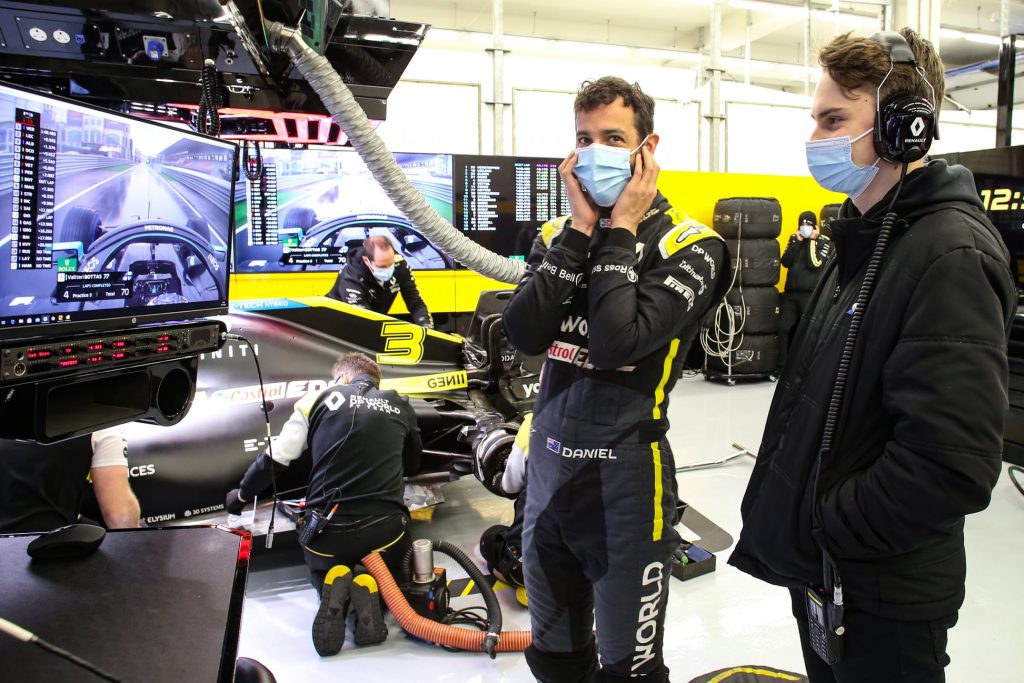 Race director Michael Masi admitted to f1.com that it was “Not a situation we like to see. We released the cars from pitlane as the recovery vehicle was moving to the escape road. Following information given to Race Control by the Clerk of the Course that the vehicle would be clear of the track before the cars on their out laps reached Turn 8 where the recovery was taking place. As soon as it became apparent that the recovery vehicle had been delayed in moving completely into the barrier opening, we extended the area of double-waved yellow flags from Turn 8 to the entry point of Turn 7 to further slow down the cars on their out laps. With the benefit of hindsight we would have done it differently and held the cars until the recovery was completed. We will review our procedures to minimise the likelihood of similar incidents in future.”

Q2 showed which teams had been able to extract the best performance from the wet tyre options with Red Bull and Racing Point well up the order, while Alfa Romeo were the surprise package with Giovinazzi 5th and Raikkonen 8th. Ferrari and McLaren clearly lacked the necessary grip and languished outside the top 10. Mercedes seemed to be safe, though uncharacteristically unspectacular with Hamilton 2.5 seconds behind Verstappen’s fastest time in 3rd place. Both the Ferrari and McLaren teams, along with Gasly, were the ones to be eliminated at the end of Q2.

Ocon was the only driver to venture out on intermediate tyres at the start of Q3 and slid around the circuit as he struggled to get the tyres up to temperature. Verstappen set the early benchmark on wet tyres with a 1:52.326 on his first flying lap and looked set to improve on his second tour before the decision to pit saw him abandon the lap. Ocon’s lap was 7.5 seconds slower than the Red Bull, which suggested that the wet tyre was indeed the correct choice for the session. Sergio Perez was the catalyst for change when he moved to the top with a 1:52.037 after a change to the intermediates.

The final moments saw two distinct strategies as some teams followed Racing Point’s lead and switched intermediates, while Ricciardo and others continued to churn out consistent times on the wet tyre. Perez lowered his best to a 1:49 then spun, while Lance Stroll logged a personal best in sector 1, then fastest times in sectors 2 and 3 for a 1:47.765. Verstappen dropped into the 1:48 bracket but it was not enough to deny Stroll a first pole position in Formula One.

“Today was incredible and one of the best moments of my Formula 1 career,” Stroll told Racing Point media. “When I was told over the radio that I had taken pole position, I was thinking: ‘pinch me, I’m dreaming!’. I’m still a little lost for words: I’ve dreamt of days like these and it’s a special moment. The conditions out there were incredibly slippery and it was very tricky to drive, but my confidence in the car was just building throughout qualifying and I was piecing it all together.The session showed that it was so important to be on the right tyre at the right time and we definitely made the correct call by being on intermediate tyres at the end. It worked out perfectly. We knew it would come down to the final lap and we put it all together for pole. I’m going to let this sink in and enjoy it before thinking about tomorrow. We know it’s going to be tough with Max close by and the Mercedes will probably make progress, but we have both cars in great positions and we can aim to score important points for the team to make it a really special weekend. I’d never been to Istanbul before this weekend, but I definitely love it now!” 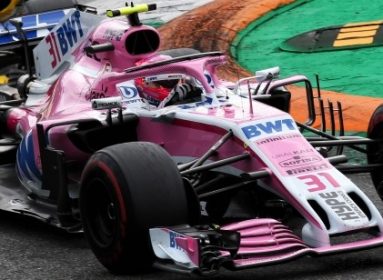 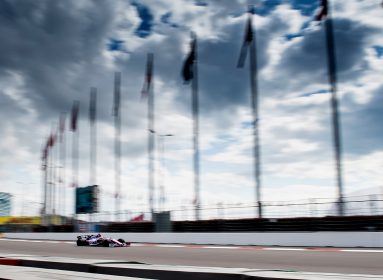 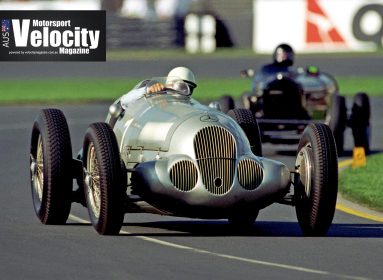