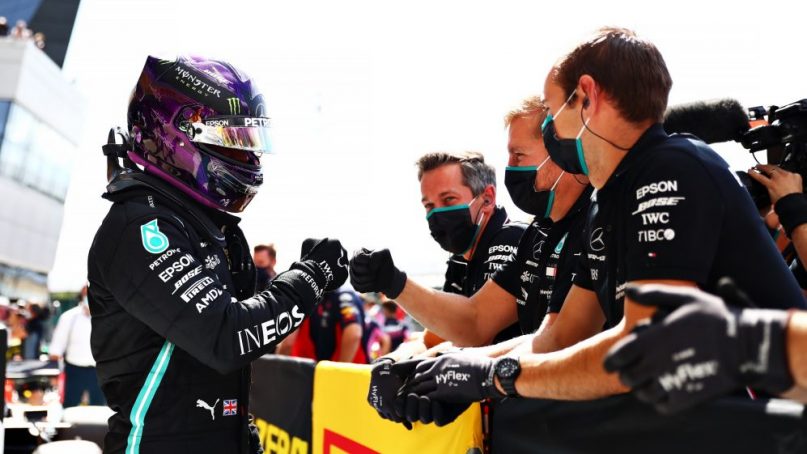 Lewis Hamilton overcame a spin in Q2 to claim pole position for the 2020 British Grand Prix ahead of team Valtteri Bottas. Bottas had been the pacesetter throughout the final practice session and carried that pace into the final phases of qualifying. 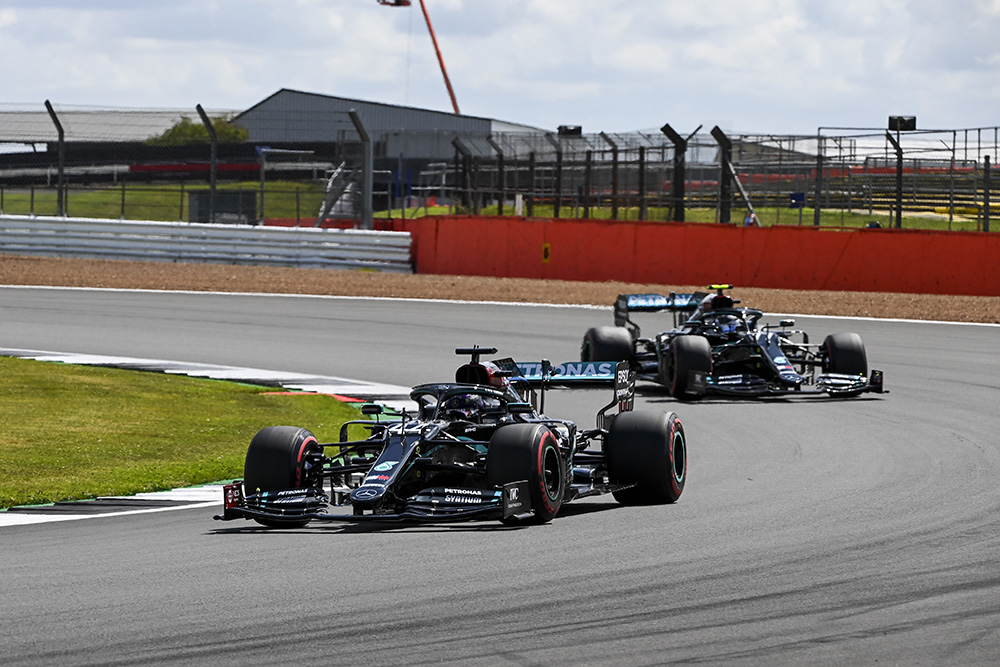 Hamilton appeared to buckle under Bottas’ relentless pressure with an uncharacteristic spin, but regrouped to oust the Finn from the top position. Hamilton’s lap of 1:24.303 was the fastest ever by a Formula One car, while Bottas’ second place marked his 66th successive appearance in Q3, a record he now shares with Hamilton.

Phase 1 of qualifying provided some nail biting moments for Renault as Daniel Ricciardo and Esteban Ocon hovered near the relegation zone in 13th and 14th, just ahead of George Russell in the Williams. A late spin for Nicholas Latifi brought some relief with a momentary yellow zone as he limped the Williams back onto the circuit. A final flurry of quick times saw Lando Norris drop to 15th, with the Ferrari powered Alfa Romeos and Haas cars eliminated. Latifi was last after his spin and also failed to progress.

(See the full Qualifying report below)

The final practice session of the 2020 British Grand Prix presented more drama as Alex Albon’s Red Bull was systematically dismantled as the team raced to rectify an energy store issue with his car. Albon had been second fastest in P2 but ended the session with his Red Bull jammed against the armco fence with substantial damage to the left side of the car. Despite initial fears of a possible chassis change the team were able to repair Albon’s car for Saturday.

Lewis Hamilton held the benchmark time as the session moved towards the latter stages, only to see is time bettered by Valtteri Bottas and Max Verstappen. Hamilton moved into second in the dying moments for another Mercedes 1-2. Lance Stroll finished fourth from Carlos Sainz, Charles Leclerc, Lando Norris, Daniel Ricciardo, Nico Hulkenberg and Pierre Gasly.

This feeling never gets old, that’s for sure!” Lewis Hamilton exclaimed. “We made some changes to the car going into Qualifying and it felt worse, so it was a real struggle out there in the first two sessions. At this track, there can be a headwind, tailwind and crosswind all at different parts of the circuit, so it’s like juggling balls whilst you are on a moving plate. Qualifying is a lot about building confidence after the spin in Q2, I had to take some deep breaths, compose myself and mentally reset – especially knowing Valtteri was putting in fast lap after fast lap.”

Lewis Hamilton may not have led a single session heading into qualifying for the British Grand Prix, but he delivered when it mattered, the Briton sweeping to pole position and fending off a stern challenge from Mercedes team mate and strongest championship rival Valtteri Bottas.

Reigning world champion Hamilton wasn’t too happy with the car after Friday practice and was unusually still making changes to his Silver Arrow ahead of qualifying. He later admitted those tweaks subsequently made the car worse, and you could believe it when he made a rare mistake in Q2, spinning at Luffield and dragging gravel onto the track to cause a red flag.

But as he has done so often in his illustrious career, Hamilton regrouped, zoned everything else out, and pieced together the fastest lap of the weekend to nail a track record and put pole position out of reach. In doing so, he also became the first driver to take seven poles at his home event.

Bottas slotted into second, three tenths off the pace, with Max Verstappen in third for Red Bull, around one second adrift of Hamilton, such was the domination of Mercedes at the Northamptonshire track. They silver cars were 0.7s quicker than 2019, whereas Red Bull and Ferrari are both slower than they were in Q3 this time last year.

Ferrari opted to strip the downforce of their car here in a bid to make up for their power deficit, and that has helped their qualifying form, with Charles Leclerc taking a strong fourth, only a fraction behind Verstappen. But team mate Sebastian Vettel’s miserable weekend continued, as he could only manage 10th, though he will at least start the race on the more durable medium tyre.

Lando Norris made it two British drivers in the top five, continuing his strong start to the season as he beat Racing Point’s Lance Stroll, with McLaren team mate Carlos Sainz two tenths further back in seventh. And both Renaults made it into Q3, with Daniel Ricciardo edging out Esteban Ocon.

But the day belonged to Hamilton, the Briton securing his 100th front row start for Mercedes in 144 races for the team. And pole sets him up perfectly for another win on home soil, given the last six Grands Prix have been won from P1.

Q1 – Mercedes duel at the front as Russell impresses again

Bottas set out his stall as favourite for pole position, having topped the times in FP3, with the quickest time after the fastest runs, edging out team mate Hamilton. He improved again next time around, and while Hamilton did, too, he was still a tenth shy of the Finn. Both were comfortably through to Q2, though, with Verstappen their closest threat in third.

Further back, there was more evidence that the midfield appears to have broken in two, with Haas and Alfa Romeo dropping off the midfield and into their own group at the back, as both their drivers failed to make the cut in this segment of qualifying.

It was a tale of two halves for Williams, though, with Nicholas Latifi spinning and ending up slowest of all, while his team mate George Russell delivered his third consecutive appearance in Q2, suggesting that not only have Williams caught the pack, but they are – at least in qualifying trim – stronger than Haas and Alfa Romeo.

The Briton is, however, under investigation for potentially not slowing sufficiently for yellow flags caused by Latifi’s spin, though he was quick to get on the radio and insisted the telemetry would show he slowed.

A Hamilton mistake is a rarity, but one crept in early in Q2, as the Briton lost the car at Luffield, spinning round and dragging so much gravel onto the track, the race director opted to deploy the red flag to clean it up.

When the session got back under way, Hamilton hooked up a tidy lap on the mediums to comfortably go second, three tenths adrift of Bottas on the same rubber with both laps easily good enough to progress.

As the second runs got under way, Vettel and Stroll boldly headed out on the mediums to mix it up with strategy, with their immediate rivals opting for the soft. And it paid off, just, with the duo progressing ninth and 10th respectively.

Stroll was particularly fortunate as he set the exact same time as Pierre Gasly, but took 10th by virtue of having set the time first. There wasn’t so much luck for his temporary team mate Nico Hulkenberg, mind, the German failing to make the cut – ending up 13th quickest.

Alex Albon was only four tenths shy of team mate Verstappen in third, but that meant he didn’t make the top 10 either, taking an early bath along with Danill Kvyat, who has a five-place grid penalty for a gearbox change, and Russell.

Sainz produced an impressive lap at the death to snatch fourth, almost matching the time set by Verstappen, although the latter only did one run to save a set of tyres, while Leclerc proved Ferrari appear to have made gains in terms of qualifying trim, having stripped the car of downforce, with fifth.

Bottas had all the momentum coming into the final segment of qualifying, but having been up on Hamilton’s time in the first runs of Q3, he lost that advantage and more in the final corner to slot into second.

That heaped the pressure on the Finn and he couldn’t take the fight to Hamilton second time around, as the Briton, buoyed by hitting the top of the time sheets at the first time of asking, simply stretched his legs to extend his advantage.

Red Bull secured their first top-three start at Silverstone since 2016 with Verstappen, but there was a swing against them of 0.9s versus Mercedes compared to the times in Q3 last year. Leclerc’s fourth place, six clear of Vettel, means he is now 2-2 in the team mate head-to-head.

Norris’ fifth place means he has now started in the top five twice in four races, while Stroll progressed beyond Q1 at Silverstone for the first time in his career as he took sixth. Having failed to make Q3 in Hungary, Renault got both cars into the top 10 shoot-out in Britain, behind Sainz as Vettel completed the top 10.

Pole-sitter Lewis Hamilton: “Qualifying’s all about confidence building and damn, I had that spin and I was already down, I was struggling through the first section every lap, and I don’t know how but with some deep breaths, managed to compose myself. Q3 started off the right way. It still wasn’t perfect the first lap but still a really clean lap and the second one even better. It never gets old that’s for sure.” 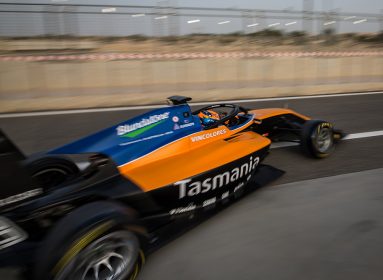 ALEX PERONI BACK ON TRACK AND FASTEST IN F3 TESTING 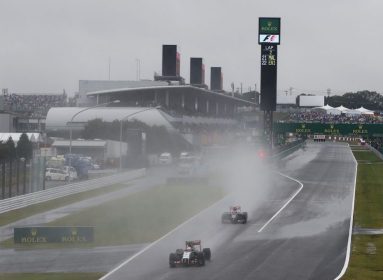 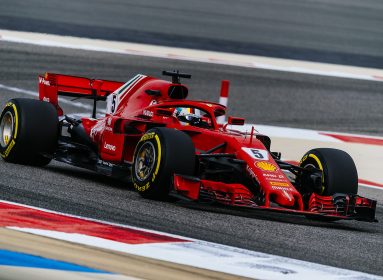