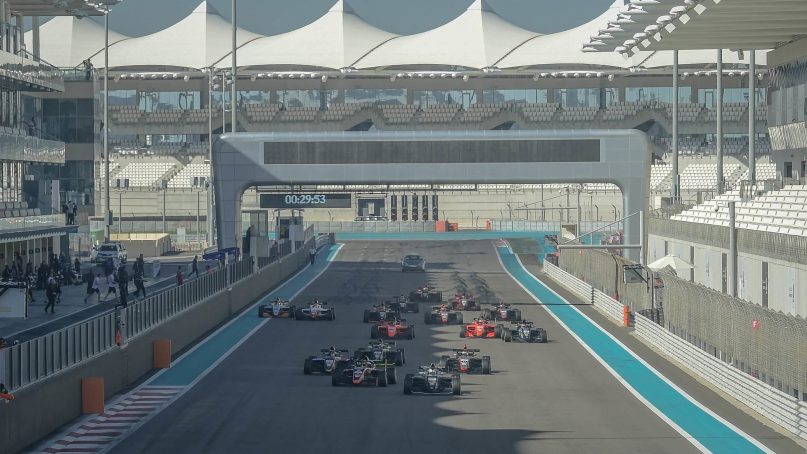 BlackArts Racing’s Joey Alders extended his lead in the race for the 2020 F3 Asian Championship Certified by FIA by taking victory in Race 8, while Pinnacle Motorsport’s Sebastian Fernandez swept to a convincing win from pole in the final race at the 5.554km Yas Marina Circuit in Abu Dhabi. Race 9 concluded what has been a sensational Middle East debut for the series, with two, back-to-back triple headers at the Dubai Autodrome and at the home of the Abu Dhabi F1 Grand Prix.

Williams F1 development driver Jamie Chadwick was denied her first win of the season in Race 8. Having crossed the line first after an impressive run from pole, she was subsequently handed drive through, converted post-race to a 20 second penalty, for a false start. That handed the win to Alders, who extended his leaderboard advantage yet further after title rival Doohan retired from the race with a technical issue. Ukyo Sasahara was third on the road and promoted a position after Chadwick’s penalty but, ineligible to score points, Absolute Racing’s Devlin DeFrancesco took points for second after an intense hard-but-fair fight to the line. Pinnacle Motorsport’s Sebastian Fernandez was third in the final results.

The final race of the championship’s Middle East debut saw Fernandez storm to victory virtually unchallenged from pole in a 13-lap race which was twice interrupted by safety car interventions. Pinnacle Motorsport team mate Doohan got his title campaign back on track with second place, joined on the podium by Hitech Grand Prix’s Nikita Mazepin.

In the Masters category, Abu Dhabi Racing UAE driver Khaled Al Qubaisi continued his impressive championship and single seater debut by taking class wins in both races to round out the week with a perfect score of three pole-to-flag victories.

With six more races remaining, Alders now has a 48-point lead over Doohan, but Mazepin is now just a single point behind the Australian. Absolute Racing’s Devlin DeFrancesco lies fourth, with Fernandez rounding out the top five. Strong results from Pietro Fittipaldi see him jump to sixth in the Driver Classification.

Competition for the Team title is also heating up, with BlackArts Racing retaining the lead but Pinnacle Motorsport now just 34 points behind and Hitech Grand Prix in third.

The battle for the 2020 F3 Asian Championship Certified by FIA title – and all-important super license points – continues next month at Malaysia’s Sepang International Circuit with Races 10 to 12 on February 14 and 15.

Jamie Chadwick got away well off the start, but Jack Doohan was away like a bullet from P2, getting alongside into Turn 1 before veering off track to make the pass and snatch the lead. However, the 16-year-old Australian was quickly ordered to forfeit the position back to Chadwick. But before he was able to do so, an incident between Seven GP’s Tatiana Calderón and Absolute Racing’s Tommy Smith saw the pair collide, bringing out the safety car. Calderón was later penalized five grid positions for the start of Race 9 for the incident with Smith.

Doohan neatly handed the lead back to Chadwick behind the safety car, putting him second ahead of Sasahara who had got by Alders on the opening lap.

At the restart on Lap 6, Chadwick led the cars over the line, but Doohan kept her within striking distance with Sasahara and Alders not far behind. DeFrancesco and Fernandez resumed their battle, one which was to rage on almost to the flag. Behind them, Yu Kanamaru got by Pietro Fittipaldi and up to seventh on the road.

Alders found his way past Sasahara on Lap 7, but just two laps later, Doohan pulled over and retired with a technical issue, handing the Dutch driver second. With Doohan out, Chadwick now had a comfortable lead of more than four seconds as she headed towards the flag.

There was heartbreak post-race for the W Series champion after she was adjudged to have made a false start and forfeit her victory. That handed Alders the win ahead of non-points scoring guest driver Sasahara, DeFrancesco, Fernandez, Fittipaldi, Nikita Mazepin and Zen Motorsport’s Yu Kuai. Chadwick was classified eighth ahead of Hitech Grand Prix’s Alessio Deledda.

Yu Kanamaru, sixth over the line, was another driver to receive a drive through post-race, also converted to a 20 second penalty, for a starting procedure infringement by the team. That dropped him to 11th in the final results.

Sebastian Fernandez got away well from pole, leading into Turn 1 with Jack Doohan and Nikita Mazepin hot on his heels. The action was quickly suspended though when the safety car was called out on the opening lap after Yu Kanamaru spun into the barrier and his car had to be recovered. Before the neutralization though, Ukyo Sasahara had managed to pass Pietro Fittipaldi to lie fourth in the order.

At the restart on Lap 5, Fernandez controlled the pack, making a good getaway to pull clear of his rivals. The Spanish-Venezuelan had an advantage of more than a second when the safety car was called out for a second time as a precaution as a bollard dislodged by one of the cars was retrieved from the circuit.

Racing resumed once again at the start of Lap 8, and Fernandez made a good getaway for the third time and once again began the task of putting some air between him and the chasing pack.

Fernandez was unchallenged in his run to the flag, with Doohan mindful of the championship standings and points at stake, and Mazepin unable to make any meaningful headway in the closing stages.

Fernandez sailed over the line with a 2.826 second margin from Doohan, with Mazepin claiming the final podium place ahead of guest driver Ukyo Sasahara, Pietro Fittipaldi, championship leader Joey Alders and Devlin DeFrancesco.

In the Masters category, class pole-sitter Khaled Al Qubaisi was once again leading until Hitech Grand Prix’s Alessio Deledda spun in front of him, the Abu Dhabi Racing UAE having to take evasive action to avoid contact. That saw Zen Motorsport’s Paul Wong take the lead, but not for long. Al Qubaisi soon resumed his place at the front of the pack, with Wong grappling to find traction in the closing stages, spinning and dropping to third in class by the flag behind BlackArts Racing’s Thomas Luedi.

Joey Alders (BlackArts Racing) – Winner Race 8
“The start was OK – not bad, not good – I just kept third place. And then Sasahara came by before the safety car and then I took him back. From there, it was just managing the pace. I saw Jack had a problem. It’s a shame unfortunately. It’s extended my gap in the championship but it’s not the way you want to win. I saw in the end Sasahara behind. In the beginning he was a little bit faster, but he’s not competing for the points so I didn’t try much defending, just focussed on the exits. In the end I had a better pace.”

Devlin DeFrancesco (Absolute Racing) – 3rd Race 8
“We seemed to have quite an OK start, around P4, P5 as we knew Sasahara’s not fighting for points. Then Doohan broke down unfortunately, which is not the way you want to be on the podium. It was definitely a hard race from our side with Fernandez. Very hard-fought but very fair. He definitely had a lot more pace than we did. The team worked really hard last night and we tried to make minimal gains that we could – the big steps aren’t made overnight. They’ve done a mega job this week to have the speed we have and to be on the podium.”

Khaled Al Qubaisi (Abu Dhabi Racing UAE) – Masters winner Race 8
“It’s amazing! I really didn’t expect it to be so much fun and so exciting. It’s my first-ever single seater formula racing. I really like it. The car is amazing, the track here in Abu Dhabi is amazing, the competition is really, really great. You can learn a lot. There’re always things you can learn. Every session I go out, every lap, I’m learning more.”

Sebastian Fernandez (Pinnacle Motorsport) – winner Race 9
“I just focussed first of all on the start. The two races before I had two really bad starts, so I didn’t want to get into the first corner in P2 or P3. Once I saw I had a good start I just kept my head down. We had the first safety car which was two or three laps long, and after that I had a good restart and pulled away from the other guys. Then again, another safety car which was quite short, and again I had a good start and good pace to the end. I’m happy with the result.”

Jack Doohan (Pinnacle Motorsport) – 2nd Race 9
“Luck hasn’t really been on our side, but sometimes that’s motorsport. I have good starts. This weekend we had some clutch issues which made it a fair bit more difficult not to stall the car, but I got off the line decently. I had a run on Sebastian, but there was no point in trying to do anything as 1) we’re team mates, and 2) I can’t afford anything! Then Nikita had a fair bit better pace than me for most of the race. Once the rear started to go it kind of helped my car a bit to get some rotation and I was able to manage the gap towards the end, but the pace wasn’t really outstanding.”

Nikita Mazepin (Hitech Grand Prix) – 3rd Race 9
“Well the race was a bit boring after the start to be honest! There were two interruptions with the safety car. As I’ve said before, this track is quite difficult to overtake and one, two, three remained the same. I had a few tries on Jack in the earlier part of the race. They weren’t too successful because I couldn’t get enough of the run, then as soon as I was coming closer, I was getting the dirty air and that wasn’t giving me the opportunity to make an overtake. So, I started third, did an average start, and remained in the same place. Just a reasonably good race.” 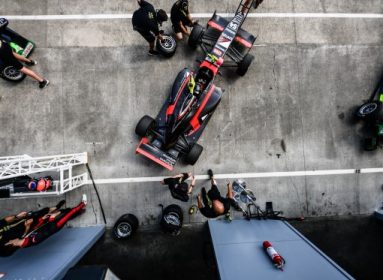 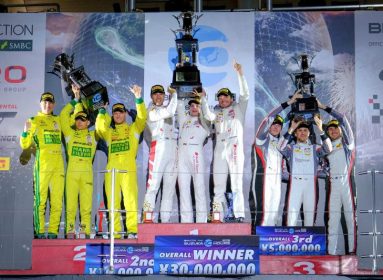 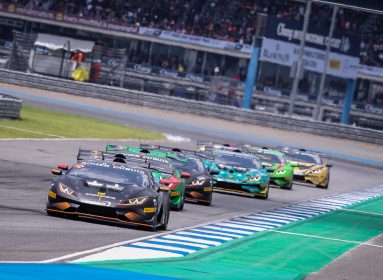