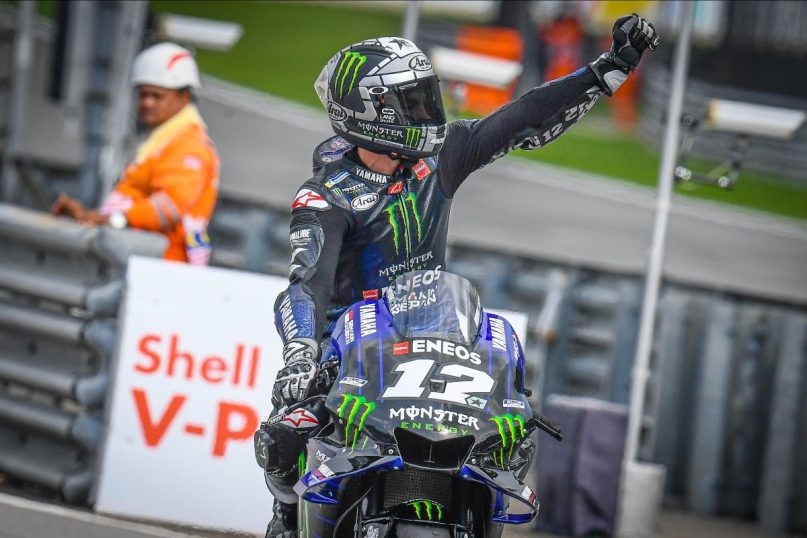 The number 12 keeps cool to turn the tables on Marquez as Dovizioso fights off Rossi for the podium.

It was Jack Miller (Pramac Racing) who somehow shot up for the holeshot from the second row, the Aussie bravely heading round the outside to take the lead from front row starter Franco Morbidelli (Petronas Yamaha SRT) as his teammate – and polesitter – Fabio Quartararo lost out. Marquez and Dovizioso, meanwhile, had made lightning starts to move through from P11 and P10 respectively, already well up in the fight at the front. At the very front though, Viñales was already stalking his prey.

It didn’t take long for the number 12 to strike, snatching the lead from Miller at Turn 11 as Marquez passed Morbidelli for P4. A frantic first lap wasn’t over yet though, as Dovizioso then battled Miller for P2 at Turn 14 and Turn 15 and both headed wide – allowing Marquez to pounce. He sat Miller up, but the Australian shot back past heading into Turn 1. That was only good news for Viñales, with the Spaniard already six tenths clear at the front.

Like Australia, Marquez said, he knew he had to try and get in behind the Yamaha to stay with him and it didn’t take too long for him to finally dispatch Miller. Reeling Viñales in, however, looked like a serious mountain to climb this time around, with the gap well over a second. A tenth here and a tenth there got chipped away, but the number 12 machine in the lead had a healthy gap – and wasn’t for slowing down.

It seemed, then, that the fight behind Marquez was going to remain the fight for third. Dovizioso grabbed it from Miller on Lap 4 and Rossi was threatening too, with ‘The Doctor’ finally dispatching Miller not too long after – and the Australian suffering an almighty moment as he hung on to his Ducati.

Shortly after that, things got even more heated between Miller and Alex Rins (Team Suzuki Ecstar) at the final corner as Rins went for the inside and the two made contact. A front bit of fairing flew off the Suzuki and both stayed up, but they were forced to watch the fight for third between Dovizioso and Rossi start to peel off into the distance.

Even further into that distance, the timing screens signalled Viñales had broken his rivals. A second and a half became nearly three as a mistake became the only hurdle between him and the win, with Marquez equally safe in second. And a mistake never came from either, with Viñales pitch perfect to take his – and Yamaha’s – second win of the season and bounce back from Australia in incredible style. Marquez took second and gained an impressive nine places on the way after his Q2 crash.

The fight for third, try as he might, would not go the way of Rossi. Rins had closed in to make matters even closer, and every advance ‘The Doctor’ made on the Ducati was repelled as the Suzuki also started to threaten. Dovizioso, as ever, was a demon on the brakes and the nine-time World Champion just couldn’t make a move stick, although a few lunges at it made for a great battle between the two Italians. ‘DesmoDovi’ took it by a few tenths over the line, with Rossi forced to settle for fourth and Rins completing the top five.

Miller, meanwhile, slipped back into the clutches of the Petronas Yamaha SRT duo and Johann Zarco (LCR Honda Idemitsu). Morbidelli came out on top in that fight for sixth and he was top Independent Team rider in the race on the team’s home turf, and that combined with Quartararo’s tougher day at the office in seventh nevertheless means Petronas Yamaha SRT are Independent Team Champions too. Miller took P8, and Zarco, sadly, didn’t finish.

The Frenchman showed a big step forward in his second race weekend on a Honda, but it ended early after a pass from Joan Mir (Team Suzuki Ecstar) went awry, crashing Zarco out of the top ten. Mir would get a Long Lap Penalty for the incident, and that dropped him back below Danilo Petrucci (Ducati Team), who took ninth.

And so we leave Sepang and the flyaways with a new man on top after a run of dominant performances from Marquez. Viñales couldn’t be stopped in Malaysia, will the same be said at Valencia? Find out in two weeks as the paddock flies back to Europe for the season finale and we decide the team Champions and the top Independent Team rider of the year.

Maverick Viñales: “Honestly I have to say this is one of the times in life I’ve been the happiest. After the Australia crash I felt I won the race, because I attacked in my head…but then actually crashed. It was a bit of a disaster but we arrived here with everything clear, the bike was on a great level all weekend from FP1 since the first laps so we pushed, pushed and pushed and made a gap, which was important. I then tried to control the race which wasn’t easy; especially mentally it was very tough, but I have to congratulate the team because all weekend they did an awesome job.” 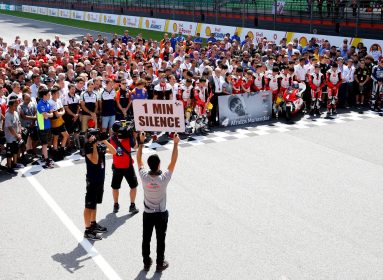 NUMBER 4 TO BE RETIRED FROM MOTOGP ASIA TALENT CUP 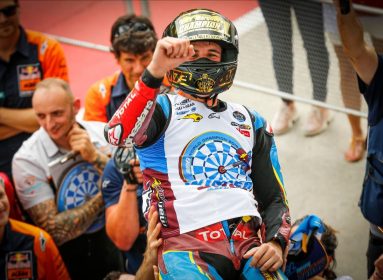 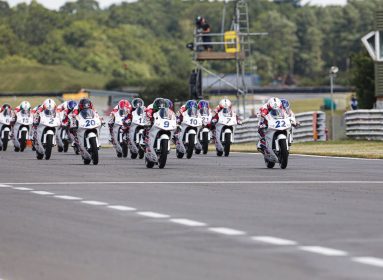