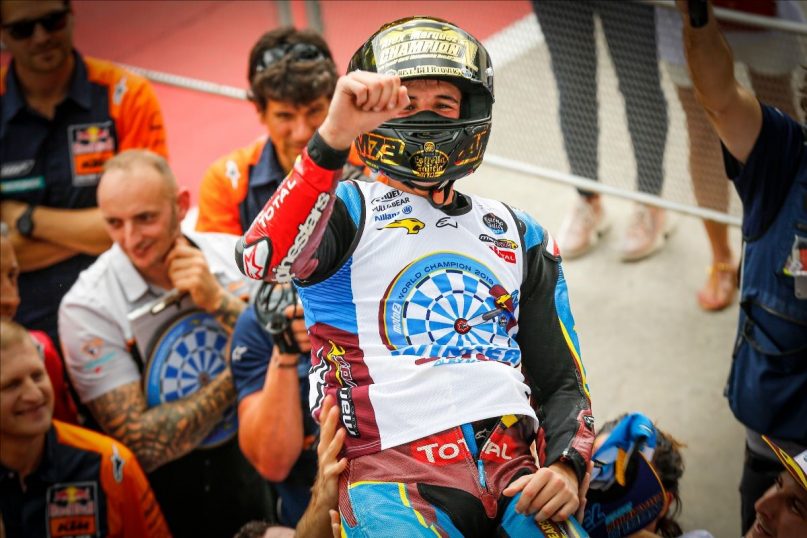 After an impressive season in the intermediate class, Alex Marquez (EG 0,0 Marc VDS) has made some history in the Shell Malaysia Motorcycle Grand Prix, taking second place to crown himself 2019 Moto2™ World Champion and become the first ever to take both the Moto2™ and Moto3™ crowns. The number 73 has taken five wins, 10 podiums and six poles this season so far.

Marquez debuted on the world stage in 2012, the same season he would go on to win the FIM CEV Spanish national title. He made three Grand Prix wildcard appearances with Estrella Galicia 0,0, impressing early on as he took sixth place at the Circuit de Barcelona-Catalunya after fighting at the front. At Indianapolis, Marquez also took over from Simone Grotzkyj at Ambrogio Next Racing, with whom he’d make eight appearances and take another top ten before the year was out.

For 2013, Marquez moved up to Moto3™ full time with Estrella Galicia 0,0 and a first podium wasn’t too long in coming as the Spaniard got on the box at Indianapolis. Before the season was out, Marquez would also become a Grand Prix winner, coming out on top at a track that would go on to see him take a few more successes: the Twin Ring Motegi. 2014, then, seemed like game on for a shot at the crown.

Now on Honda machinery but with the same team, the season became a duel between Marquez and Jack Miller that went right down to the wire and a crucial decider in Valencia. Marquez took the crown, with three wins and seven further podiums enough to wrap it up on home turf and take his first title.

From there, the intermediate class beckoned with EG 0,0 Marc VDS. It was a tougher rookie season, but Marquez took regular top tens and took a best finish of fourth twice in a row. The following year began almost tougher than the first, but Marquez pulled it together mid-season and took his first intermediate class podium on home turf at Aragon. The next step was clear: a win.

That came in 2017 as Marquez took a step forward to become a regular frontrunner, taking top fives and podiums more often than not. He also took his first wins in Moto2™  – the very first proving a demolition job at Jerez from his first pole in the class. Two more victories rounded out the year – Barcelona-Catalunya and Motegi – and Marquez was fourth overall despite a mid-season injury that saw him sit out Misano.

In 2018, Marquez was expected to challenge for the title but the season was an unexpectedly tougher one. The number 73 didn’t take a win, although he did take another six podiums and remain a threat at the front. Would 2019 be any different? Most definitely.

The year began with a more muted race in Qatar but a first podium came in Argentina to kick off Marquez’ real challenge. Top gear would be hit a little later in the year but not without a couple of hurdles – the first of which was getting crashed out of the race in Jerez after a front row start. 0 scored on his first visit to home turf, the time was nigh to fight back – and so began a stunning run of victories.

At Le Mans, Mugello and Catalunya, Marquez ruled for his first ever three-in-a-row, and he looked able to make it four at Assen before getting crashed out there. Undeterred, the number 73 took up right where he left off in Germany and Czechia, taking another two victories.

Three more podiums in the next four races and only one self-made mistake at Silverstone saw Marquez remain the man in charge, with an advantage that made the flyaways pivotal. A fifth and sixth at Buriram and Motegi were enough to give him a first match point at Phillip Island, but it was a longer shot and after a P8 in the race, the battle rolled on to Malaysia…

From pole, Marquez put together an impressive race, duelling for the lead with key rival Brad Binder (Red Bull KTM Ajo) and holding off his closest challenger Tom Lüthi (Dynavolt Intact GP) under immense pressure. Taking second place and yet another podium, his tenth visit to the rostrum was enough to secure him the crown.

• Marquez has stood on the podium 10 times this season so far and 23 times in the Moto2™ class, equalling Pol Espargaro, who is in fifth place on the list of riders with most podium finishes in the class, two less than Marc Marquez.

•    With his brother Marc Marquez having taken the Moto2™ title back in 2012, this is the first time two brothers have both clinched the title in the intermediate category.

•    In addition, with Marc also taking the 125cc title in 2010 and Alex the Moto3™ title in 2014, this is the first time that two brothers have won the Championship in two of the same classes of Grand Prix racing.

• Marquez is the fifth Spanish rider to win the Moto2™ title along with Toni Elias, his brother Marc, Pol Espargaro and Tito Rabat.

• Marquez is the eighth different Spanish rider to clinch the title in the intermediate category. Marquez’ title is also 11th in the class for Spanish riders and the 52nd in Grand Prix racing.

• With eight wins in Moto2™, Marquez is tied in sixth place on the list of riders with the most wins in the class with Andrea Iannone, Franco Morbidelli and Francesco Bagnaia.

• Marquez sits in fourth place on the list of Spanish riders with the most wins in the class, behind his brother Marc (16), Tito Rabat (13) and Pol Espargaro (10).

•    With 23 podiums, Marquez is now tied in third place with Pol Espargaro on the list of Spanish riders with most podium finishes in the Moto2™ class. 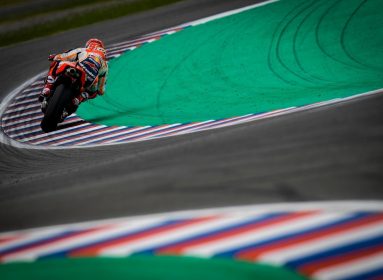 MARQUEZ FIGHTS OFF VINALES AND DOVI FOR TERMAS POLE 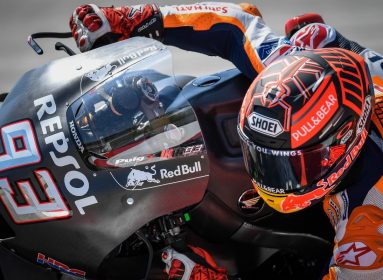 MARQUES RETURNS FROM INJURY TO TOP DAY 1 AT SEPANG 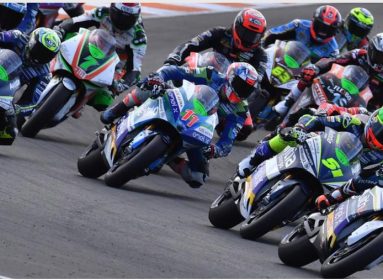