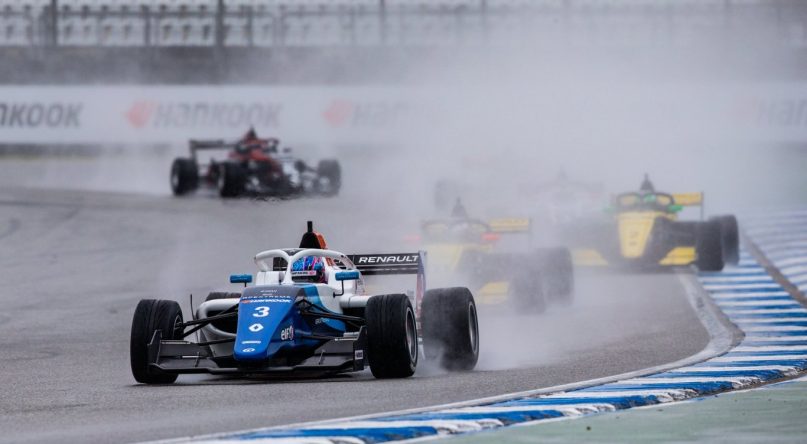 In the showers that fell over Hockenheim, Alexander Smolyar won for the first time since Monaco ahead of team mates Oscar Piastri and Caio Collet. Thanks to this sweep of the podium, R-ace GP claims its third consecutive Formula Renault Eurocup Teams’ title. Oscar Piastri and Victor Martins (MP Motorsport) will duel for the title in three weeks time in Abu Dhabi.

Sunday morning, rain returned to Hockenheim. In these conditions, the times improved on each lap under the impetus of the R-ace GP trio of par Oscar Piastri, Alexander Smolyar and Caio Collet, as well as Victor Martins.

In the final minutes, it came down to Alexander Smolyar and Victor Martins, who came out on top with a lap of 1:51.531s as the chequers waved. Lorenzo Colombo (MP Motorsport) was third ahead of Caio Collet and Oscar Piastri, who were followed by Bhaitech Racing drivers Petr Ptáček and Federico Malvestiti.

Smolyar returns to the Top

After two laps behind the safety car, the field was let loose as Victor Martins held on to the lead from Alexander Smolyar and Lorenzo Colombo while Caio Collet and Oscar Piastri battled for fourth place.

On lap four, Lorenzo Colombo dropped out of the top three when he got caught out by the conditions, as did a number of other drivers throughout the field. Shortly after, the Renault Mégane R.S. safety car came back out once again to allow for the removal of the car of Cem Bölükbaşı (M2 Competition), which suffered a technical issue.

The restart on lap six allowed Alexander Smolyar to catch up to Victor Martins and take the lead at the hairpin. Once in the lead, the Russian quickly pulled away before his lead was reduced to nothing when Alessio Deledda (Global Racing Service) finished his race in the gravel trap.

The race resumed on lap ten. Once again, Alexandre Smolyar pulled away, leaving Victor Martins to deal with the pressure coming from Caio Collet and Oscar Piastri. The two Renault Sport Academy drivers made contact on the penultimate lap and Oscar Piastri made the most of it to move into second place.

Alexander Smolyar went on for the win with a six-second margin of victory to Oscar Piastri while rookie Caio Collet completed the R-ace GP one-two-three to clinch the Teams’ title for the third successive season. Starting 11th, Kush Maini (M2 Competition) drove a faultless race to finish fourth ahead of Victor Martins and Lorenzo Colombo. Federico Malvestiti took seventh place ahead of Amaury Cordeel, who started 12th on the grid and Petr Ptáček, who lost seven places when he spun early in the race. Finland’s Patrik Pasma (Arden Motorsport) completed the top ten.

Alexander Smolyar (R-ace GP): “I am really pleased with this win, I’ve been waiting for it since Monaco. The tricky conditions made it a difficult race, but it makes me prouder to have come out as the winner. When Victor Martins was in the lead, I noticed that he was braking quite early at the hairpin. My objective was to stay close to him before this corner, which was my best opportunity. I went for it, but I didn’t manage to do it without contact, but that’s racing sometimes! Now that I am no longer in contention for the title, I will be able to take a few more risks and I can’t wait to see what Abu Dhabi has in store for me.”

Oscar Piastri (R-ace GP): “I knew the duel between Victor and Caio had the potential to be aggressive, but I didn’t expect it to end the way it did. This shows that anything can happen in a race and I was rather pleased to inherit second place. In Abu Dhabi, my approach will be to focus lap after lap, corner after corner and second after second on what I have to do and not worry about anything else. That’s what I did today in qualifying and in the race. I don’t think I was the fastest on the track, but it worked out pretty good for me in the end!”

Caio Collet (R-ace GP): “I had a better pace than Victor and he made a mistake in going too deep at turn eight. He lost traction off line and I had a better exit and to take him on the outside three corners later. I tried to leave him enough room, I couldn’t have gone much wider, but I think he over-steered on the inside and that is what caused the contact. I could have finished second, but this result is fantastic for the team which did an incredible job in the rainy conditions.”

Thibaut de Mérindol, R-ace GP Team Principal: “We are very happy to wrap up the title and confirm with a new Formula Renault car and totally different tyres! We all started from scratch in all areas and all of the teams had highs and lows during the year. We relied on our strong group of people, mechanics and engineers in the team, our work methods, but also on the best drivers. This allowed us to build up step by step even though we can still improve as I am convinced that we are still far from our potential. This will take time, but I would like to congratulate them all for this season… And I trust Oscar to do the job in three weeks! 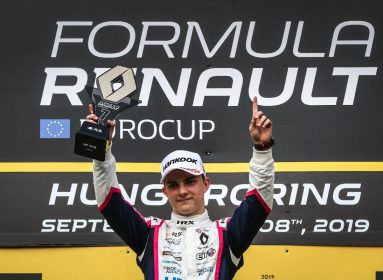 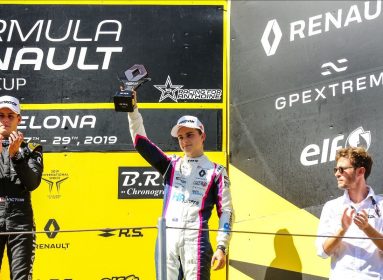 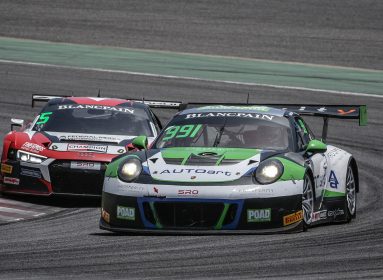