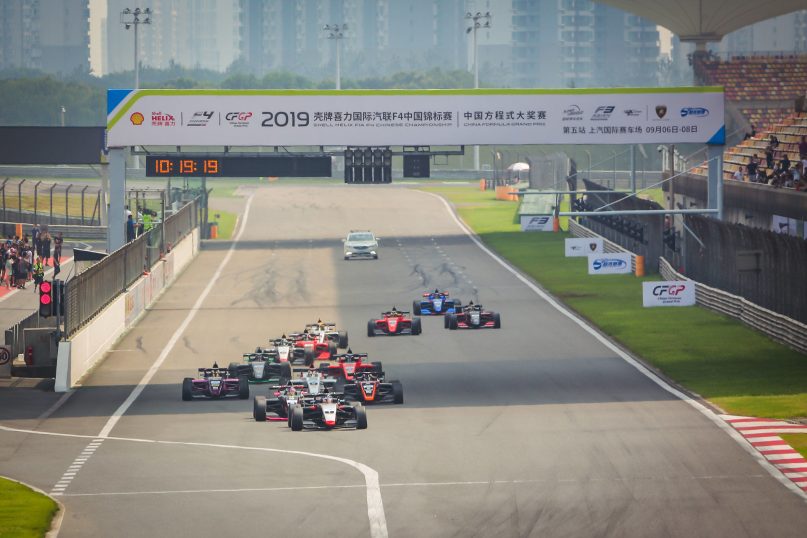 Ukyo Sasahara completed a dominant weekend by taking a clean sweep of victories at the Shanghai International Circuit, his wins in Races 11 and 12 giving him a 38-point advantage at the top of the F3 Asian Championship Certified by FIA leaderboard over Hitech GP team mate and Red Bull Junior driver Jack Doohan with three races remaining.

After 12 of 15 races, Sasahara and Doohan have pulled clear in the points, and the championship fight will go down to the wire between the pair in Shanghai on September 27 and 28. Doohan, who battled to find his race-winning form on the 5.451km F1 track but nevertheless managed to take two podium finishes, has just two weeks to prepare for what will be a nail biting season-ending showdown.
In the Masters category, Paul Wong of the 852 Challengers clinched the title with three races to spare, earning an unassailable points advantage over class winner in Races 11 and 12, Thomas Luedi of BlackArts Racing.

The two races also saw standout performances by local hero Daniel Cao of Absolute Racing. Strong all weekend, the Chinese talent was second in Race 11, but an opening lap racing incident with Brendon Leitch put pay to further success in Race 12. Pinnacle Motorsport’s Jordan Dempsey put in a phenomenal run in Race 12 to take his second podium finish of the season, while Super License driver Yu Kanamaru had a storming run in Race 11 to finish just shy of a podium.

Sasahara made the perfect start from pole, with Cao, Doohan, Kanamaru and Absolute Racing’s Eshan Pieris in hot pursuit. Leitch dropped two places down the order from his P4 grid position at the start, but quickly gathered his wits and mounted a fierce comeback. Behind him, Jackson Walls gained a place to lead from the Pinnacle Motorsport trio of Dempsey and Ayrton Simmons and Tommy Smith.
Leitch wasted little time reeling in Pieris. Despite a spirited defense, the Sri Lankan was eventually overhauled by the determined Kiwi, who made his move up the inside at Turn 8. Pieris next fell into the clutches of Walls, the Australian Hitech GP driver drafting past with a late dive at Turn 6.

Next in the sights of Leitch was Kanamaru who, despite being plagued by setbacks in Race 10, had managed to set a blinding lap to put him P5 on the grid for Race 11, and was determinedly holding his position behind Doohan. The quick Kiwi was relentless in his pursuit of another podium, but Kanamaru rose to meet the challenge, holding Leitch at bay to claim a well-deserved fourth place, his best finish of the season so far.

Another driver who put an unlucky Race 10 firmly behind him was BlackArts Racing’s Masters driver Luedi, fending off a furious challenge from title rival Wong to claim his third class win of the season after a superb, nose-to-tail dual with the 852 Challengers driver.

Sasahara sailed across the line to take his seventh victory in 11 races. Cao took his second runner-up finish in as many races, the young Chinese driver proving once again he is a man to watch. Despite enduring a tough Shanghai debut, Doohan pushed hard to claim a well-deserved podium finish ahead of an on-form Kanamaru and Leitch.

As a triumphant Sasahara – carrying his biggest points advantage of the season into the first of the four final races of the season – and a frustrated Doohan regrouped ahead of the final race of the weekend, the Hitech GP stablemates were the two remaining protagonists in the battle for the 2019 F3 Asian Championship Certified by FIA title.

On pole for the third time this weekend, but this time lining up alongside title rival Doohan, Sasahara once again made a flawless start, closing the door on his team mate and holding the advantage into Turn 1. Behind him, however, Leitch took the outside line to pass Cao, but sandwiched between the Kiwi and a car on the inside, the Chinese driver had nowhere to go. Leitch and Cao came together, an incident which ended the race for the Absolute Racing driver. Leitch was able to continue but had his work cut out to work his way through from the back of the field.

The safety car was called out as Cao’s car was recovered, with Sasahara leading from Doohan, Dempsey, Pinnacle team mate Simmons, Absolute Racing’s Pieris, and Super License driver Kanamaru.
At the restart at the start of Lap 4, Sasahara was once again away like lightning, both he and Doohan hard on the power. However, Dempsey was keeping the pair in his sights, locking in like a heat-seeking missile behind Doohan.

Leitch, meanwhile, was on the move and up to ninth by the end of the following lap and finding his way past Pinnacle Motorsport’s Tommy Smith a lap later. Next it was Smith who fell prey to the fast-moving Lamborghini Squadra Corse young driver to put him seventh in the order.

As Sasahara once again left the chasing pack behind, Dempsey stayed on the back of Doohan before the Australian managed to make a break for it. In a replay of Race 11, Leitch closed up to Kanamaru, unsuccessfully trying a move at Turn 6, but following up moments later with a second overtake which this time stuck, progressing to sixth in the order. With three laps to go, next it was Pieris who came under fire, but the Sri Lankan had built enough of an advantage to hold on to fifth at the flag.

Sasahara sailed across the line to take his eighth victory of the season so far and putting himself in pole position for the championship. However, Doohan’s second place will have buoyed his confidence, with the odds firmly in favour of the Australian returning to the Shanghai finale back on winning form.
Dempsey took a thoroughly well-deserved podium finish ahead of Simmons, Pieris, Leitch and Kanamaru, with Walls, Zen Motorsport’s Yu Kuai and Smith rounding out the top ten over the line. However, Leitch was later handed a ten second penalty for the incident which prematurely ended Cao’s race, demoting him to eighth.

Thomas Luedi took his second Masters victory of the day, taking his tally of class victories to four so far this season. However, Wong’s second place was enough to clinch the title to the delight of the 852 Challengers driver.

The F3 Asian Championship Certified by FIA returns to the Shanghai International Circuit for its season finale on September 27 and 28, where Races 13-15 will decide this year’s title between points-leader Sasahara and Hitech GP team mate Doohan.

Fans can stay up-to-date with the latest championship news via the series’ Facebook page and on www.f3asia.com

Driver Quotes:
Ukyo Sasahara/Hitech GP/1st – Race 11
“I got a good start and the car was really easy to drive today. I tried to manage the gap and maintain it for the whole race. [On team mate title rival] Jack was really quick today. It’s really tough to be team mates and it’s really hard. Every round we have to get good points all the time, so it’s really tough.”

Daniel Cao/Absolute Racing/2nd – Race 11
“I will check my car because just now I felt a little bit of oversteer at sector 1. I hope for the next race to get a better result.

Jack Doohan/Hitech GP/3rd – Race 11
“I’m definitely not 100% comfortable with everything. Sometimes it’s like that. We just have to get to the bottom of it – whether it’s me, or the car, or a combination of both things. We need to find more pace and get in front of Ukyo in the next four races and hopefully get back on top of the championship.

Thomas Luedi/BlackArts Racing/1st Masters – Race 11
“It was good fun! We had a great car. Paul was faster in certain parts, and I was faster in others. He kept catching up to me but I could keep him behind, until he made mistake and then the last lap was easier.

Ukyo Sasahara/Hitech GP/1st – Race 12
“I think the last round is going to be very tough. Jack is getting better and better, so I’ll just try to keep my head down for the last rounds.

Jack Doohan/Hitech GP/2nd – Race 12
“I didn’t really have a better feeling unfortunately. I wish I did, but Jordan had good pace behind me. I was struggling to keep him behind me and Ukyo did an awesome job all weekend so credit to him. We’re still struggling to try and find the connection with me and the car, so we’ll keep working over the next two weeks and maybe come back here on it.”

Jordan Dempsey/Pinnacle Motorsport/3rd – Race 12
“We tried a couple of things for the first two races. In the first race we really, really struggled – we had so much over steer like you wouldn’t believe. But then the team have been working really hard to try and fix the problem. They’ve done it for the race – the car was like on rails in that race. If only I was able to get by Jack, but he was doing enough to keep me behind.” 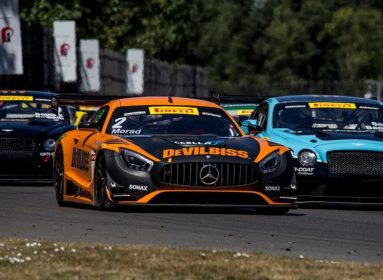 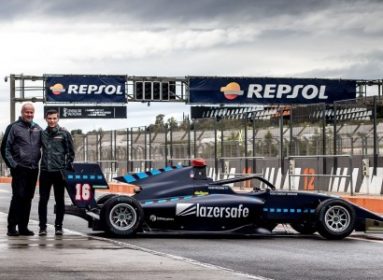 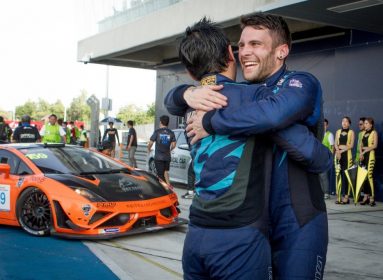 JONO LESTER LAMBORGHINI DOES THE DOUBLE IN THAILAND