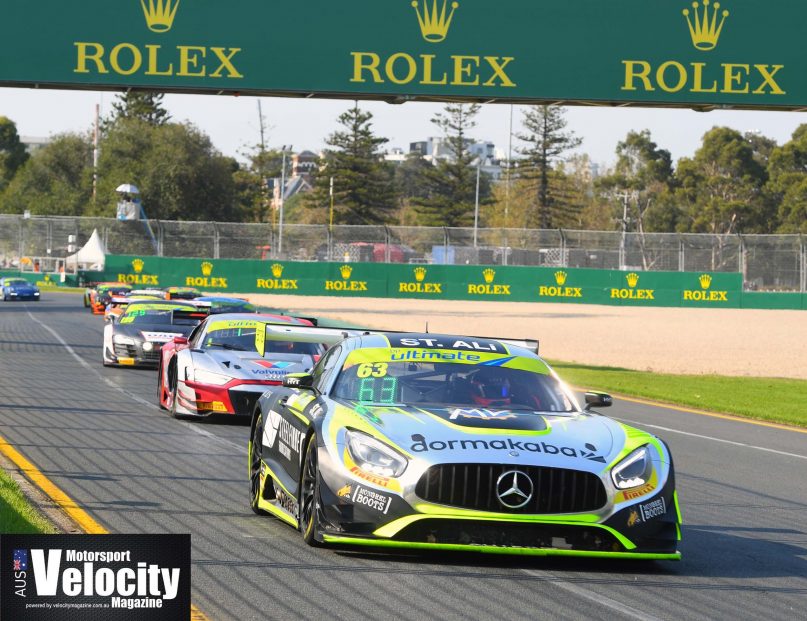 Peter Hackett claimed his maiden Australian GT victory at the Australian Grand Prix during race three of the 2019 season-opener, leading home a Mercedes-AMG 1-2-3 having taken title rival Max Twigg late in the race as they came up to lap the ailing Dale Paterson, the pair crossing the line nose to tail with race two winner Kenny Habul third after an outstanding drive from the rear of the field.

Victorian teenager Ryan How continued his incredible start to the season to claim not only his third consecutive Trophy Series victory, but a fourth-placed outright finish, the Audi driver also taking advantage of traffic to charge through on Geoff Emery late in the race. Nick Karnaros continued his strong form to take the Trofeo Challenge victory, whilst Glen Wood added to his winning tally in the #48 KTM to take back the points lead from McLaren’s Ryan Simpson.

A 10:15am start saw the drivers at the circuit early and ready for action under crystal clear skies. Race one combatants Fraser Ross and Kenny Habul were the early focus, Habul off rear of field due to the race ending contact with Ross, whilst Ross wore a ten-position grid penalty for his part in the incident, both though were quickly through the pack.

Twigg led the field away at the front, holding Peter Hackett at bay into turn one, the Mercedes-AMG pair comfortably ahead of a quartet of Audis led by reigning champion Geoff Emery, Ryan How, Tony Bates and Lee Partridge. Behind them both Habul and Ross were on a charge, the race two winner jumping to the tail of the top ten by turn three where he was faced with a wall of cars on the exit, the SunEnergy1 Mercedes on full opposite lock with wheels on the grass as he tried to avoid the melee ahead.

Sadly that melee took out team-boss Scott Taylor in the #222 Trophy Series Porsche after contact from behind in a battle with John Morriss in an identical Porsche, the Queenslander sidelined with a broken radiator.

Nick Kelly was the next victim of turn three, the reigning Trophy Series champion connecting with the right rear of Tony Bates at the apex of the corner a few laps later, a similar issue to that which cost Kenny Habul his position in the opening race – Kelly coming off second best and forced to retire with suspension damage at turn four.

Fraser Ross had been making forward moves over the early laps from P11, taking Lee Partridge for position before the close of the opening lap, but Partridge returned the favour soon after before heading out in pursuit of Tony Quinn who had also taken advantage of the busy opening lap to mix it inside the Audi pack.

Turn three saw even more action soon after, Partridge firing down the inside of Quinn under brakes, making contact as Quinn turned in to the apex, spinning the Aston Martin deep into the gravel, and damaging control arms in the left front of his Audi, which ultimately saw the ‘Aussie Driver Search’ Audi unable to negotiate turn five and ultimately make contact with the barriers on the outside of the corner, although fortunately, not at high speed.

Sadly for Twigg, that incident and the bogged Aston Martin brought out the Safety Car, closing up the field allowing Hackett to close in on the tail of the #8 Mercedes, but with Geoff Emery, Ryan How and the impressive Kenny Habul right on his tail.

Habul was on fire, making short work of Ryan How on the restart before jumping Geoff Emery in traffic with two laps to go, Ryan How taking advantage of the opportunity to drop the reigning champion back to fifth.

Up front the restart also worked against Max Twigg who had held a small but comfortable margin over Peter Hackett, Hackett taking advantage of the slower Dale Paterson across the back of the circuit, the Camaro driver having rejoined after a a puncture from debris sent him to the pits early. Twigg made a judgement call to run around the outside of the Camaro, Hackett electing to take the other side, in the process, grabbing the race lead.

By this stage Habul was comfortably the fastest on track, closing on to the tail of Twigg with one lap remaining, although despite his impressive pace, he fell just short, crossing the line less than two seconds back from Hackett and a second behind Twigg.

Ryan How’s incredible Grand Prix debut saw him again take top honours in Trophy class and fourth outright, Geoff Emery fifth ahead of Fraser Ross who this time around was unable to make an impression on the leaders.

Tony Bates was seventh, still lamenting a lack of pace, whilst John Morriss led home the recovering Richard Gartner whose team had repaired the ‘Safe-T-Stop’ Lamborghini overnight after his contact with the turn 12 barriers in the second race, the pair completing the Trophy Series podium alongside Ryan How.

Nick Karnaros grabbed his second win of the event in Trofeo Challenge ahead of Jim Manolios, the Lamborghini driver improving again over his race two best with Shane Barwood third.

Ryan Simpson initially crossed the line as the GT4 class winner, but post race investigation revealed he had been too quick on the restart after the Safety Car, incurring a ten second penalty which handed Glen Wood his second win of the event. Simpson was second ahead of Trent Harrison who was forced to fight his way past Mark Griffith in the Ginetta to record his best result of the event after a number of minor electrical glitches had sidelined both he and team-mate David Crampton across the preceding days.

Joseph Ensabella was fourth in Trophy Series in the ‘Aaron Laboratories’ Porsche ahead of Dale Paterson who was forced back down the order with the earlier tyre failure, the local Chevrolet engine-tuner though having found almost five seconds over his 2018 pace to be smiling widely despite the setback.

For the Australian GT teams, the opening round of the 2019 season will conclude on Sunday morning with the final 25-minute race scheduled for 11:40am.

What the drivers had to say;

“If you’re close enough to the leader with a couple of laps to go, you know you’re going to catch the slower cars, then it comes down to racecraft and all of those years of karts and open-wheelers and GTs kind of just unfolds in front of you. I saw Max [Twigg] commit to the outside of the Camaro who was a little bit slower mid-corner, so I made a decision to go down the left side. Max chose the wrong side – that’s the way it goes sometimes, but I’ll take it!”

“Before the Safety Car we had about a four second lead, then we built back up to a second and a half lead, but with about one lap to go the Camaro tried to out-brake me at turn 11 which allowed Hackett through to take the win, but overall on points that’s a win and two seconds, and we’re leading by a bit now as far as points go, so it’s okay.”

“That was about as fast as that car could go without making it four foot shorter! I needed just one more lap, one more lap and for sure I would have got them [Hackett and Twigg], but I’m happy all the pieces are still on the car and I didn’t come back on the tray of a tow truck. I was really nice because I could hear the fans screaming on the side of the hill and I was sideways just giving it everything over the kerbs, it was a lot of fun.” 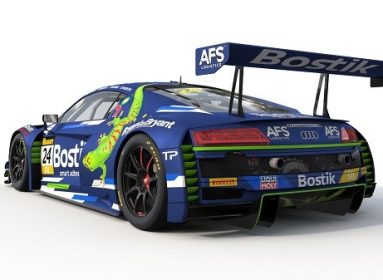 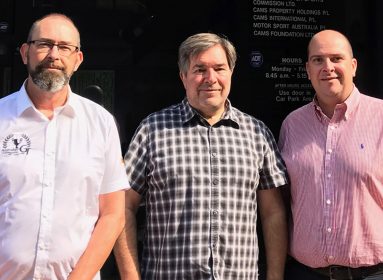 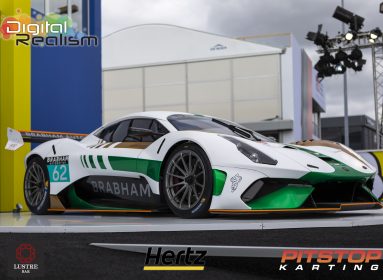