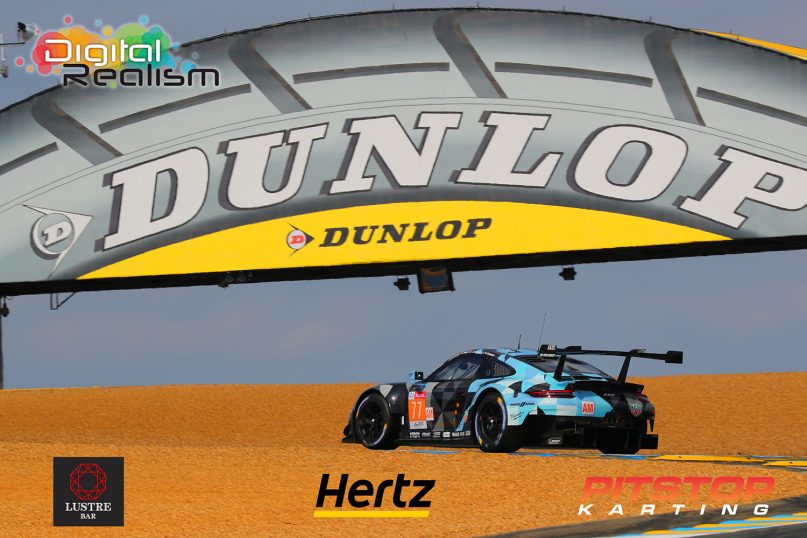 We are here on the spot this weekend for the 2018 Le Mans 24hr the 86th running of the worlds best Sports Car Race.  We will add to our diary each day from when the cars first hit the track.  Reading from the top down the latest post will be at the top.  Throughout the post we will have links to our Le Mans Photo Gallery.

We also want to acknowledge our very special sponsors for this event, without them we would not be here, thank you to Hertz Penrith, Pitstop Karting in Townsville and the team at Lustre Bar in Melbourne.

The last two hours of the race were both slow and fast, not sure that makes sense, but we had to be down on pitlane in our race suits and cycle helmets before 2pm as the gates to pitlane are locked at 2pm to stop the crowd busting in before the winning car is in park ferme.  It was a big rush, as we had just got back from the Porsche Curves shooting.

So once I was ready at about 1.45pm I headed down and spent the next two hours until the chequered flag came out in pit lane near both the Toyota and Dempsey-Proton pits, both teams pitted during this time and I have added some photos into the gallery from this final part of the event.

Once the cars had crossed the line the winning Toyota was brought in under the podium which then saw the celebrations begin. 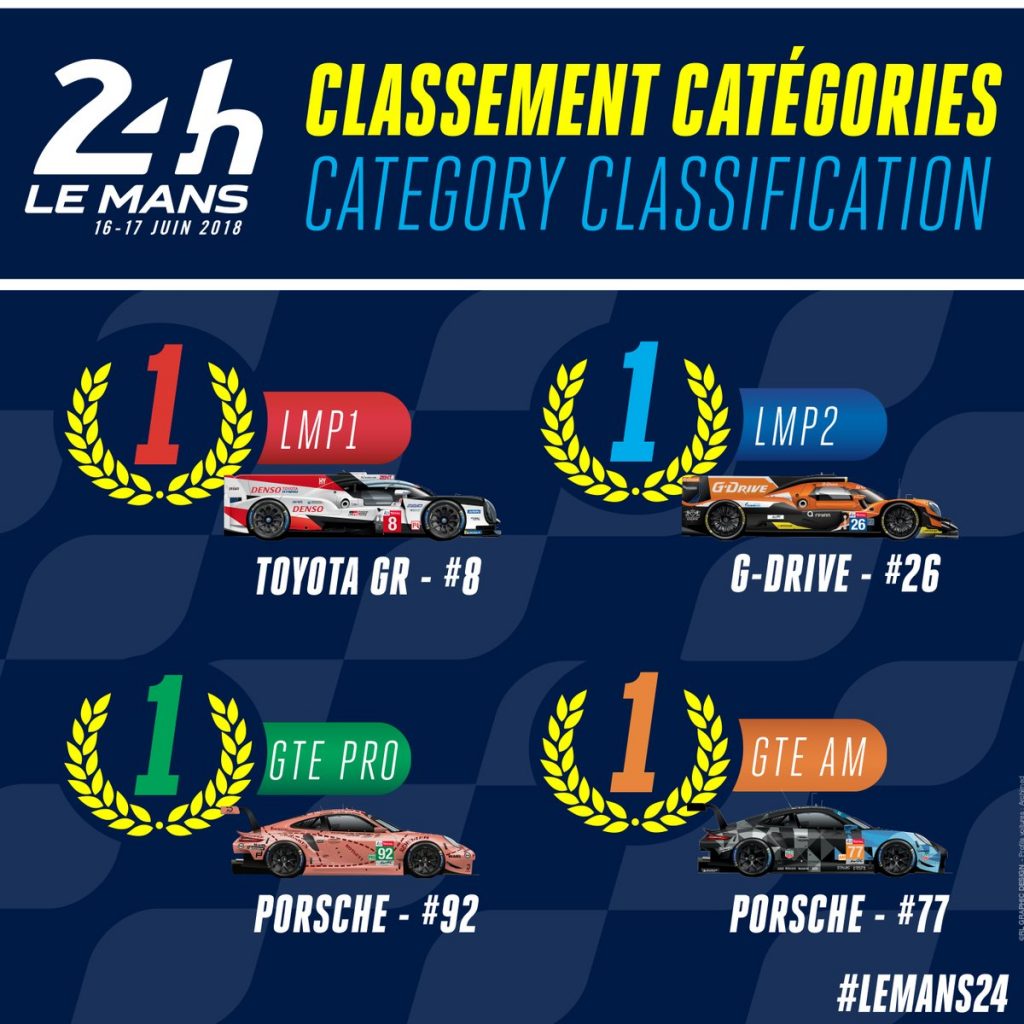 I then spent the next hour under the podium whilst the outright winners and then each class had their podium celebrations, we have added these photos into the gallery too. 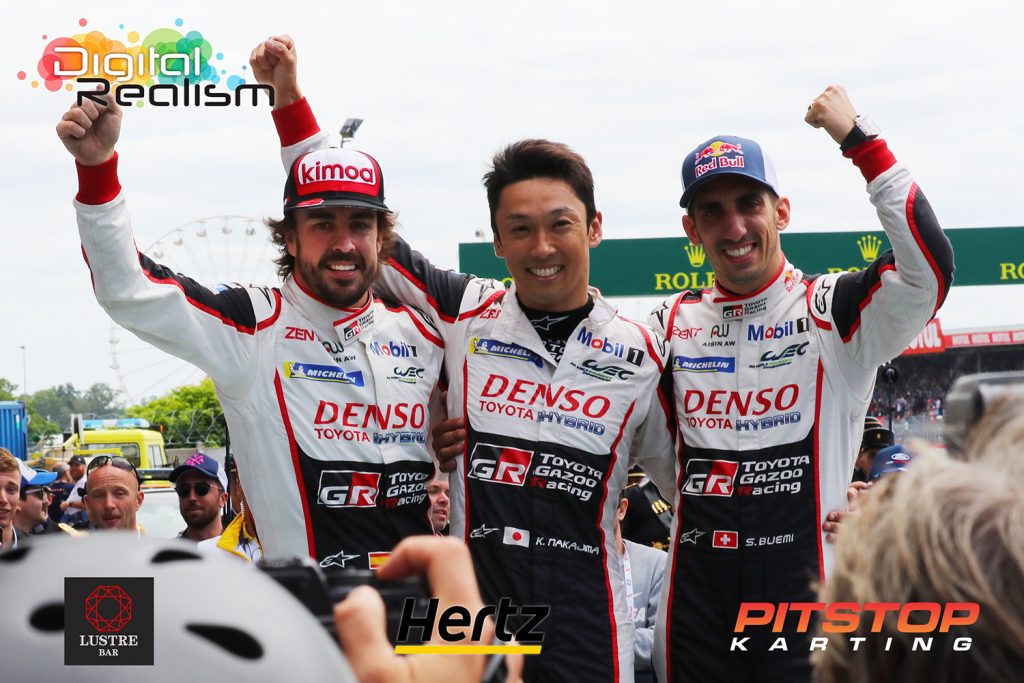 This then pretty much wound up our trip to the 24 Hours of Le Mans for 2018, it was a mind blowing event, it was hard work, with of course long days even outside of the 24hr race.  It was beyond fantastic to see our mate Matt Campbell take the win in his class with the Dempsey-Proton team.

From here we are traveling into Southern France for the Formula 1 Grand Prix next weekend at the Paul Ricard circuit which we will of course be reporting on.

Thanks to everyone who stopped by to read our Travel Diary to Le Mans.

Don’t for get we will have a special report on this Le Mans event in issue 29 of Velocity in about 8 weeks time-subscribe here.

We have been asked how the Aussies are going in the event so here is the Line Up with 5 and a half hours to go:

After a very long night both in the media centre and out on the track, where we were shooting up until around 3am, we have added more images to the Gallery, don’t forget if you have a favourite driver or car or team and would like to see some photos in the gallery just let us know via the Facebook Page.

The sun came up, well we think so, it got light but no sunrise as there is a fair amount of cloud around, we have 6 hours to run as I type this.  The Toyota Hybrid LMP1 cars continue to lead the race and their class.  In the LPM2 the Number 26 G-Drive in the Oreca 07 – Gibson with Roman Rusinov at the wheel.  And in the GTE PRO class the Porsche 911 RSR of the factory GT car #92 of Michael Christensen leads from the sister car #91 with Gianmaria Bruni driving.  In the GTE AM class the Proton Dempsey Porsche of Matt Campbell leads with Campbell at the wheel at the moment, he jumped in at 6.30am and is still in the car after a double stint, they lead from Sprint of Race Ferrari F488 GTE of Giancarlo Fisichella. 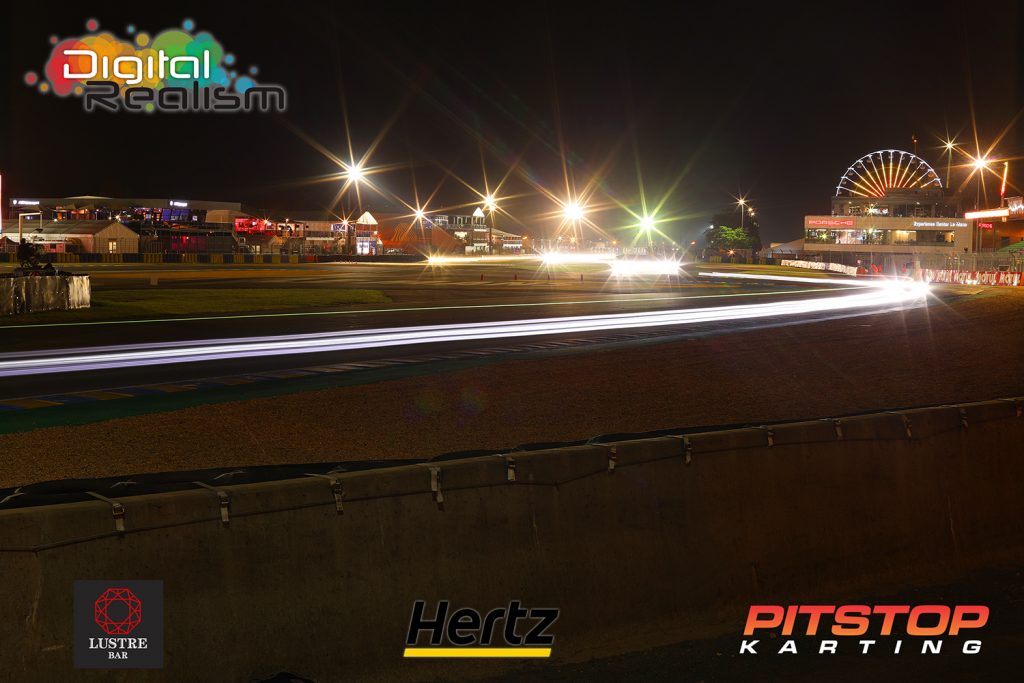 And right now 9.22am the race is under safety car again, this time a drain has come loose and they have a crew out welding it back in!

We were up reasonably early this morning expecting a huge line up to get into the circuit but it only took 15mins to get here and into the media centre.  We also scored a closer carpark to the Media Centre which is great as it may become our motel tonight if we cannot hack the pace!

Before the 24hr starts we photographed both the Aston Martin one make racing (see our gallery for a crash Darin captured during this race) and then we photographed the Road to Le Mans class’ race and the first few laps, both of these races ended up with safety car periods. 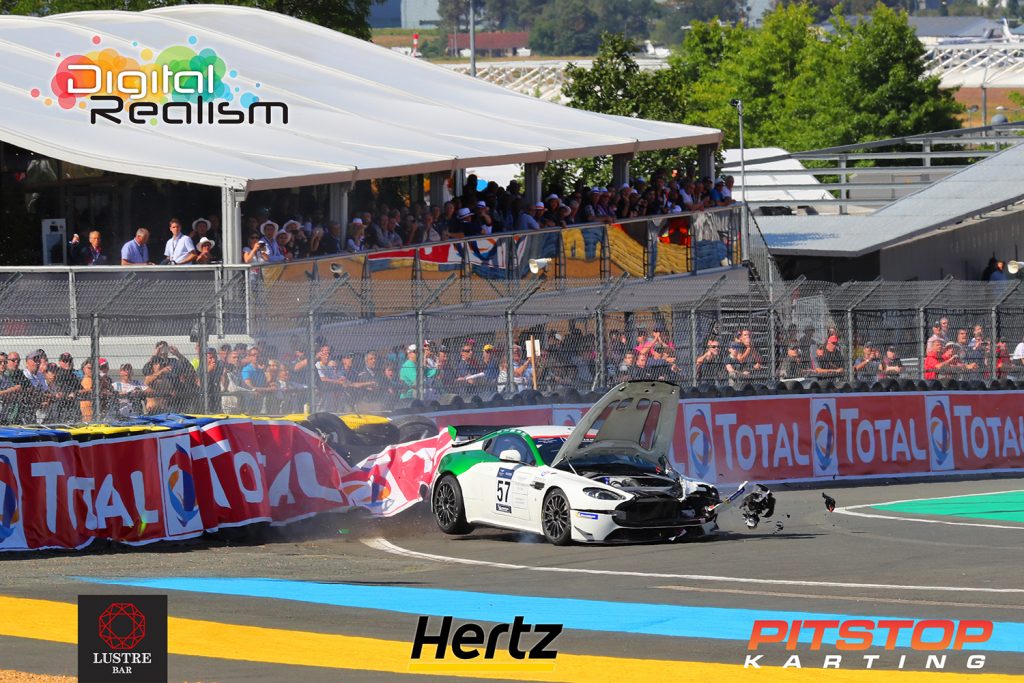 The crash in the Aston Martin class – Photo: Darin Mandy

After all of the pomp and ceremony the 2018 Le Mans 24hr got under way and at the time of writing this its been running for the past 2.5 hours, Mike Conway is leading in the number 7 Toyota in LMP1 and they lead from their team mates in the number 8 car. 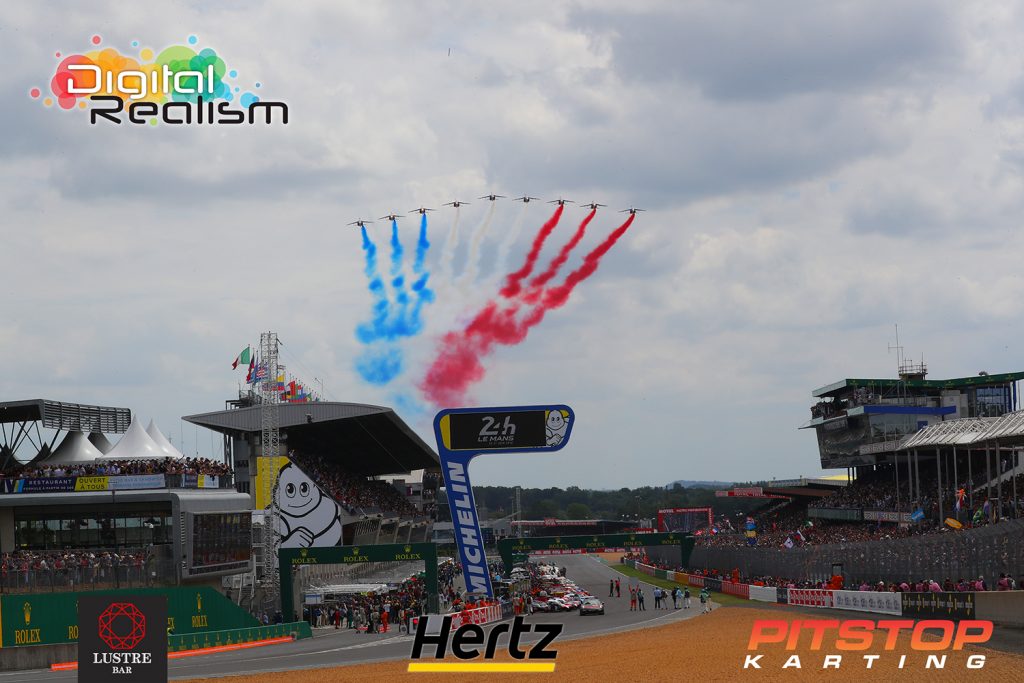 The cars leave the grid for the warm-up with the aerial display – Photo: Darin Mandy

There have been a number of Yellow Area’s with cars coming to grief, they don’t run the safety car in these instances, just local double yellows and a 80km/hr speed limit.  One of these slow spots was caused by the Gulf Racing Porsche in LM GTE AM class having a huge spin and hitting the tyre wall, the car managed to come back in and has been repaired and is out again, down 11 laps from the leaders.

Matt Campbell drove the first stint for the Dempsey-Proton Porsche team and this car sits first in class at the moment.

A sleep in and chill out at our AirBNB this morning after a very long day on Friday….leaving around lunchtime we made our way down to the centre of Le Mans….which is a nice stroll through the streets and a beautifully landscaped parkland to the Le Mans City Centre to wait and watch the driver parade….the crowds started to gather from 3pm and by 5.10pm the parade was underway…..Darin followed the drivers around the road ways and made sure to capture not only the cars but the drivers and the entertainment. Finishing the actual parade at 7pm we made our way to a local restaurant for dinner with the Campbell family….much of our talk was seeing Matt Campbell enjoy himself immensely…..and to reminisce on who would have thought that after meeting the Campbell’s 12 years ago at Morgan Park Raceway we would all be eating out in France for dinner at the Le Mans 24hr. 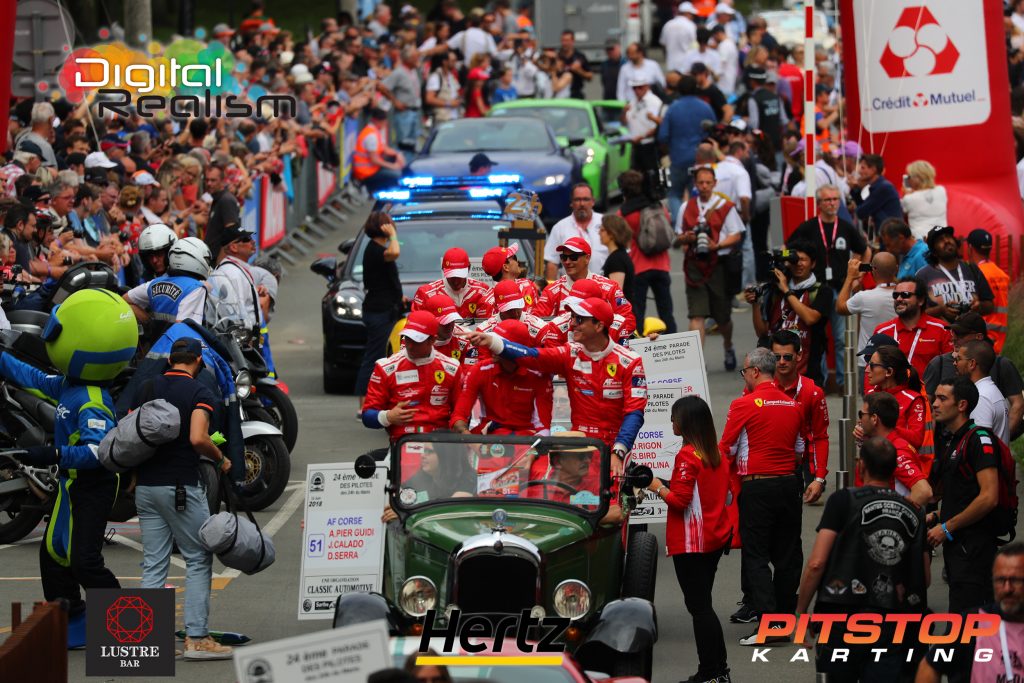 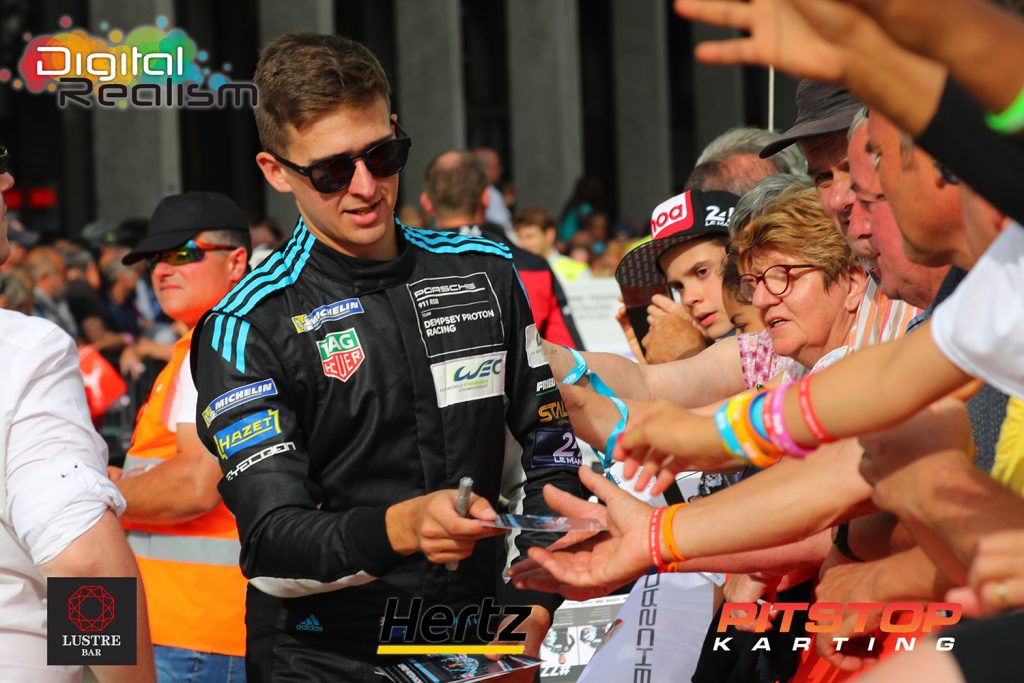 Croissants and Eclairs for breakfast LOL – as you do.

Today the 24hour cars are not on track until 7.00pm for a 2 hour qualifying session and then another one from 10.00pm to midnight.  There are two other support classes being the “Road to Le Mans” which are the past cars, these are pretty cool, and also Aston Martin Racing Le Mans festival “The 45-minute race takes place on the same day as the 24 Hours of Le Mans on the full circuit at La Sarthe, and will be filled with cars from all corners of the Aston Martin universe. And, for the first time ever, will include two of the awe-inspiring 7-litre, V12-powered Aston Martin Vulcans – entered by the newly-opened AMR Performance Centre, based at the Nürburgring in Germany”.

We have elected to take the morning off after a late night last night.  This race meeting is unlike any other, the odd times you are at the track to, the later starts, the day off in the middle (Friday there is a drivers parade downtown Le Mans) and of course the 24hours itself, there is heaps on here away from the track.  On our way into the track today we are going to visit the Le Mans Museum. 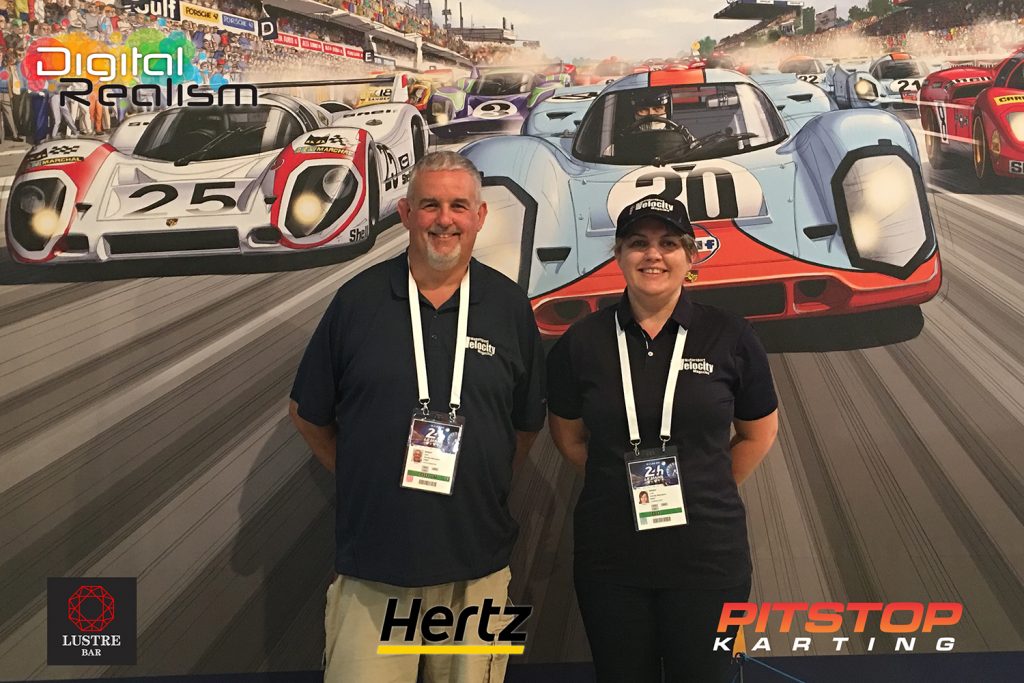 Hear Matts interview with us here.

As I type this its 5.30pm local time and there is a Road to Le Mans race happening, the 24Hours cars are all being prepared for the final two qualifying sessions.  Matt told us that qualifying is based upon the fastest lap the car does, regardless of who the driver is, there is no combining of driver times.

EVENING Edit: So the 24hr cars qualifying sessions took place during the event, the first from 7pm till around 8.30 when it was red flagged – it was suppose to run until 9pm – after that the second and last session started 30 minutes early (almost caught me out as I was sitting having a snooze next to the track when suddenly the cars were almost upon me!)

All in all it was a great day at the track, a long one, once we got out of the circuit with thousands of others and back to the house it was 1.30am local time.

Today we hired a car and drove through to Le Mans from Paris, after 3 rain filled days sightseeing it was good to fine weather for our trek 2.5 hours south west of Paris.  We picked up the rental car from the Lourve which them made for a very interesting drive through downtown Paris!  Especially seen as it was out first time driving a left hand drive car (and a manual to boot) on the other side of the road!!

We arrived at Le Mans around 1.30pm to the MMArena which is the accreditation centre to collector passes and information, programs etc.  We had no idea from there where the media centre was, parking or anything so after a bit of juggling we found both! Its only about 1km from our carpark to the media centre!

The media centre is probably the biggest we have ever been it, its hard to tell as its a bit of a rabbit warren with lots of rooms, we got settled in and seen as the 24hrs cars were already into their first 4 hour test session, we went out and took some shots from the first few turns. 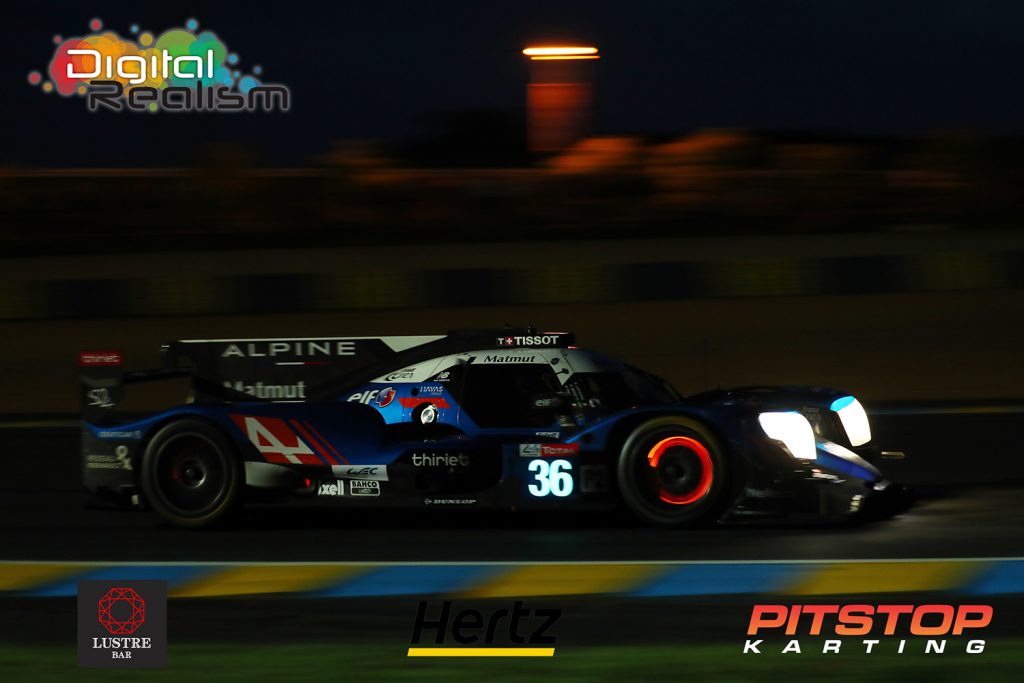 The night session kicks off at 10pm for the 24Hour cars and is actually qualifying until midnight, we photographed this for the first hour and then headed back to our accommodations in downtown Le Mans, its a pretty little town, well city.  We are staying with Matt Campbell’s (Porsche Young Professional) family who have traveled from Warwick to watch Matt race in the Dempsey-Proton Porsche 911 RSR #77. 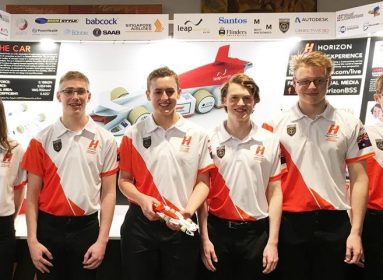 AUSSIES DEPART FOR F1 IN SCHOOLS COMP IN SINGAPORE 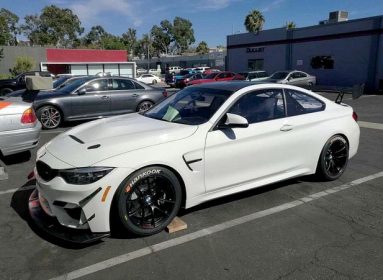 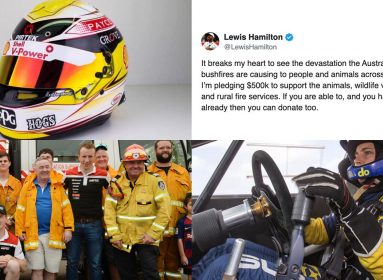